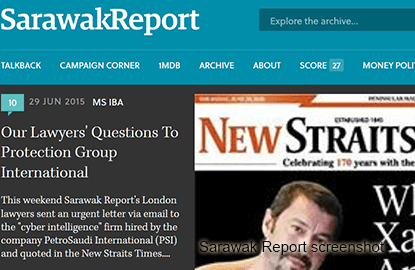 (June 30): The Sarawak Report site is under attack, the London-based whistleblower said on Twitter this evening

However, checks by The Malaysian Insider showed that the site is accessible.

The whistleblower site has been in the spotlight after Thai police arrested Xavier Andre Justo, a former director with PetroSaudi International (PSI), in Koh Samui last week over allegations of blackmail.

However, New Straits Time, quoting an unnamed source from Protection Group International (PGI), said Justo "tampered" with emails from PetroSaudi, and Sarawak Report had then published these "tampered" documents in "its claims of impropriety against 1MDB".

PGI was further quoted as saying, "Our analysis substantiates that Justo is the source of the data published by Sarawak Report.”

The whistleblower site urged PGI to confirm quotes that had been published by NST in reports following Justo's arrest.

The site's London lawyers sent an urgent letter via email to PGI to confirm the quotes attributed to them by NST.

Sarawak Report questioned how the Malaysian government was relying on alleged statements from PGI, when the firm was not prepared to confirm whether or not they made them without permission from this interested party.

"In short, PGI are not prepared to publicly go on the record and confirm that any of its employees made these remarks to NST," Sarawak Report had said. – The Malaysian Insider