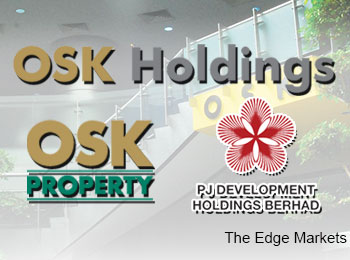 In a filing with Bursa Malaysia this evening, OSK Holdings said it will acquire OSK Property at RM2 apiece and PJD at RM1.60 per share.

This is to be satisfied entirely by the issuance of 177.643 million new shares in OSK Holdings at an issue price of RM2 apiece.

Meanwhile, OSK Holdings also signed the SSA with Ong and the PAC to acquire 31.7% stake in PJD for RM229.371 million, which will be satisfied entirely by the issuance of 114.685 million new OSK Holdings shares at an issue price of RM2 a share.

Worth noting is that OSK Holdings is also proposing a bonus issue of up to 237.74 million warrants to the existing shareholders on the basis of one free warrant for every four existing shares held.

It also proposed to pay a special cash dividend of 15 sen apiece.