OldTown gets into kitchen business in China via AEC stake

OldTown Bhd
(Jan 28, RM1.64)
Maintain outperform with a target price (TP) of RM1.79: In an announcement to Bursa Malaysia, OldTown announced that it is acquiring a 51% stake in Hong Kong-based April Eight (China) Ltd (AEC) from Join Dream Group Ltd (JD) for HK$3 million (RM1.4 million), through its subsidiary, OldTown Logistics Sdn Bhd. The move will pave the way for OldTown to gain access to Guangzhou Supreme Food Service Ltd, a wholly foreign-owned subsidiary of AEC, which is involved in central kitchen business in Guangzhou, China.

We were not surprised by the move as the group has long indicated its intention to re-strategise and revamp its business concept and market positioning in China after a less successful venture previously, which saw four outlets owned by previous master licensee closing down. Subsequently, OldTown opened a directly managed outlet in China in September 2014. We are positive on this latest move as the central kitchen will ensure that the products supplied to the café outlets meet the specifications and food safety standards. The centralised kitchen would also allow for a more consistent delivery of quality products to the outlets while ensuring price efficiency due to consolidated procurement. Funding is not expected to be a problem to the group as the consideration of RM1.4 million is minimal to the group’s net cash position of RM70 million. 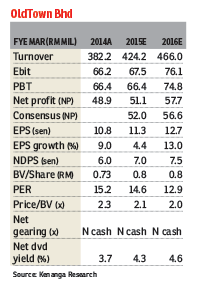 The outlook of the group could be significantly boosted if the central kitchen can provide the thrust for the group to penetrate the huge Chinese market. However, at this juncture we still adopt a wait-and-see approach in view of the challenging and competitive business environment in China. Next quarterly financial results are set to be announced next month and we are expecting to see improvement in both fast-moving consumer goods and restaurant divisions with the normalisation of earnings after being disrupted by temporary setbacks in the previous quarters.

We made no changes to our forecast as the move is more supplementary in nature to its restaurant outlet in China rather than earnings accretive. Moreover, earnings contribution from China is insignificant as there is only one outlet in China as opposed to a total of 245 outlets the group is operating in Malaysia, Singapore and Indonesia.

We maintain our “outperform” call, and our TP of RM1.79 based on 14.1 times forecast financial year ending March 31, 2016 price-earnings ratio (PER), which is below its three-year mean PER.

The risks to our call are worse-than-expected consumer sentiments and a delay in expansion plans. — Kenanga Research, Jan 28