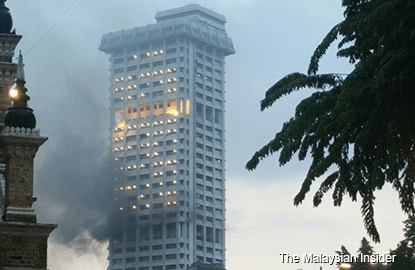 (July 29): A major fire broke out at the old Federal police headquarters tower block in Bukit Aman this evening.

According to a statement from the Fire Services Department the burning building was spotted from a distance and fire trucks were having difficulty reaching the site due to peak hour traffic.

The fire was believed to have broken out on the 10th floor of the building.

He said the fire that broke out on the 10th floor of Tower 2 which houses the Criminal Investigation Department.

Khalid said there were no casualties involved and that the fire only damaged the corridor and destroyed unimportant files and documents.

He said the offices on the 10th floor were not affected and that the cause of the fire is being investigated.

The fire was put out at 8.20pm. – The Malaysian Insider