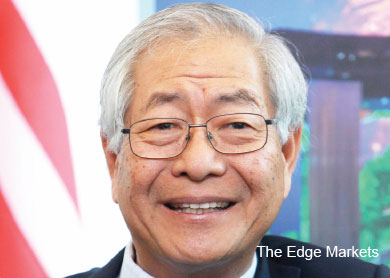 “Low crude oil prices may affect the upstream business slightly. However, the midstream and downstream segments will be alright,” he told reporters after the group annual general meeting yesterday.

“Usually when oil prices are down, transfer pricing to the downstream businesses is lower, which means there will be more money to allocate to its budget for maintenance or expansion,” he said.

Ngau also said the group is “open” to making further acquisitions as long as it provides an earnings boost.

On Dialog’s Pengerang tank terminal project, Ngau said Phase 1B and 1C are expected to be completed next month, although he is not expecting significant contribution from the two phases in the coming year as operations would have just begun.

Construction on Phase 2 of the terminal will start in the middle of next year and will be operational by end-2017.

Phase 2 of Pengerang Terminal is being undertaken by Dialog with an effective 25% stake, in partnership with Petronas Gas Bhd (65%) and the Johor government (10%).

Analysts are bullish on the group’s prospects moving forward, with growth in the second half (2H) of this year expected to be driven by activities at the Pengerang Terminal.

In a note to clients on Wednesday, CIMB Research said it expects operations of Phase 1A and 1B, and more upstream contributions, to boost Dialog’s 2H performance.

“In addition to its own developments in Pengerang, Dialog is eyeing engineering, procurement, construction and commissioning opportunities at Petroliam Nasional Bhd’s RM61 billion Refinery and Petrochemical Integrated Development project next door,” it said.

CIMB has an “add” call on the stock, with a slightly lower target price of RM1.83 from RM1.85 previously.

Dialog shares closed down 0.67% at RM1.49 yesterday, giving it a market capitalisation of RM7.35 billion.