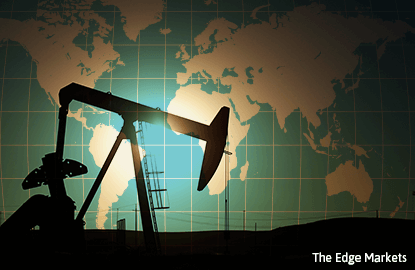 HONG KONG (Feb 15): Oil resumed its decline below $30 a barrel as Iran loaded its first cargo to Europe since international sanctions ended.

Futures fell as much as 1.7 percent in New York after surging 12 percent on Friday, while Brent in London slid 2.1 percent. A tanker for France’s Total SA was being loaded Sunday at Kharg Island while vessels chartered for Chinese and Spanish companies were due to arrive later the same day, an Iranian oil ministry official said. U.S. drillers idled rigs for an eighth week amid brimming U.S. crude stockpiles, according to data from Baker Hughes Inc.

“Iran is going to add headwinds to the market,” David Lennox, an analyst at Fat Prophets in Sydney, said by phone. “We still have 500 million barrels of U.S. inventories and shale producers are still pumping. Until there are significant cuts to output, the rally is not sustainable.”

Oil is down about 22 percent this year amid the outlook for increased Iranian exports and BP Plc predicts the market will remain “tough and choppy” in the first half as it contends with a surplus of 1 million barrels a day. Speculators’ long positions in West Texas Intermediate through Feb. 9 climbed to the highest since June, according to data from the U.S. Commodity Futures Trading Commission.

Brent for April settlement declined as much as 69 cents, or 2.1 percent, to $32.67 a barrel on the London-based ICE Futures Europe exchange. The contract climbed $3.30 to close at $33.36 on Friday. The European benchmark crude was at a premium of $1.46 to WTI for April.