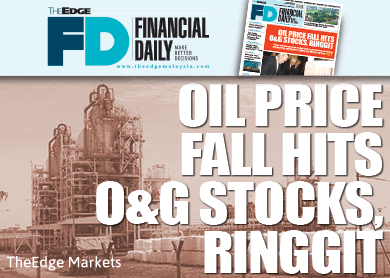 KUALA LUMPUR: Oil and gas (O&G) stocks on Bursa Malaysia took a beating yesterday, led by Petroliam Nasional Bhd (Petronas)-related stocks as global oil prices fell to a five-year low of below US$68 (RM234) per barrel.

SapuraKencana emerged as the top most active stock by volume, with 91.49 million shares changing hands. Its share price fell 10.36% or 29 sen to close at RM2.51 yesterday.

Plunging prices of oil also pushed the ringgit to 3.43 per US dollar yesterday, with Reuters reporting that it would be the largest two-day depreciation since July 1998. Meanwhile, the benchmark February contract on the Bursa Malaysia Derivatives Bhd fell as much as 4.1% to RM2,083 per tonne, its lowest since Sept 22, said Reuters.

Analysts said the double downside whammy in local O&G stocks came from the Organization of  the Petroleum Exporting Countries’ latest decision not to restrict oil output and Petronas’ proposed move to cut next year’s capital expenditure by 15% to 20%.

Bank of America Merril Lynch’s Asean economist Chua Hak Bin said the collapse in oil prices would impact the bottom-lines of Petronas and other O&G firms. It is estimated that every dollar change in oil price has a RM1 billion impact on Petronas’ pre-tax profit.

“It would also hurt investment activities,” he said in a note yesterday.

In deeming the cut in Petronas’ capex in 2015 as “worse than expected”, Affin Investment Bank Research analyst Isaac Chow said other O&G companies may follow suit.

“This will translate into lower earnings and weaker investor appetite for the domestic O&G stocks,” he said in his report yesterday.

However, the earnings impact may not be reflected immediately, but will likely be skewed towards late 2015, AllianceDBS Research analyst Tan Arhnue told The Edge Financial Daily.

Nevertheless, analysts are of the view that O&G firms with strong order books are likely to prevail over falling crude oil prices.

Chow prefers companies with integrated business models that have a good geographical spread, on top of a strong order book log.

Public Investment Bank Research in a note yesterday warned that O&G firms could face long-term sustainability issues if they are solely reliant on Petronas awards.

CIMB Investment Bank Research analyst Norziana Mohd Inon said one of her preferred stocks is SapuraKencana due to its “good leverage” in the international and regional markets.

Aviation stocks, however, gained on the prospect of cheap jet fuel on falling oil prices.

Analysts said the lower crude oil prices are a boon for airline companies, with expectation of higher earnings.

AllianceDBS aviation analyst Tan Kee Hoong pointed out that airlines will benefit from savings on fuel cost, which will translate into lower fuel surcharges for consumers.

On ceteris paribus, AirAsia Bhd and AirAsia X Bhd would save an additional RM18 million and RM12 million respectively in FY15 and FY16 for every US$1 cut in jet fuel price, Tan added.

“It will save them substantial operational expenses to report higher earnings,” he said.

Chua expects AirAsia and AIrAsia X to announce higher earnings in the fourth quarter of 2014 (1Q14) and 1Q15.