THE current downtrend in oil prices may not help local refiners, like what happened five years ago, as margins may remain pressured in the short to medium term due to a glut in refinery capacity as well as an oversupply of refined products.

Refiners listed on Bursa Malaysia, such as Shell Refining Company (Federation of Malaya) Bhd and Petron Malaysia Refining & Marketing Bhd, have exhibited volatility in their financial performance, without a clear trend of whether they can benefit from lower feedstock prices.

A source familiar with the industry tells The Edge that when crude prices drop significantly, refiners will enjoy high margins momentarily. “But then, product prices will adjust.”

He notes that there is an excess of refining capacity at the moment, which means supply exceeds the demand for refined products, hence impacting margins.

Refiners have little control on crude and product prices, and therefore refining margins, he adds. “What they can control are costs, reliability and optimisation of crude diet to maximise value of output.”

Last year, Shell Refining and Petron Malaysia both reported losses, attributed to thinner refining margins as well as geopolitical uncertainties. Their sales volume also came in below their refinery capacity.

In 2013, Shell Refining recorded a sales volume of 109,700 barrels per day (bpd), and Petron Malaysia, 79,000 bpd — a marginal decline of about 1,000 bpd from the year before for both. Shell Refining has a refining capacity of 156,000 bpd while Petron Malaysia has 88,000 bpd. Their refinery facilities are in Port Dickson, Negeri Sembilan.

Petron Malaysia slipped into the red for the financial year ended Dec 31, 2013 (FY2013), with a net loss of RM64 million, from a net profit of RM98 million previously. Revenue was lower at RM11.12 billion, from RM11.47 billion previously. The losses were due to the difference in price of crude stocks and finished products and the strengthening of the US dollar.

Nevertheless, results for the six months ended June 30, 2014 (1HFY2014), showed losses narrowing to RM8.23 million, from RM12.94 million during the same period last year. Revenue was higher at RM5.99 billion from RM5.5 billion the year before.

The higher losses in 9MFY2014 were mainly contributed by stockholding losses of RM179.4 million due to the fall in oil prices, compared with stockholding gains of RM46.5 million for the same period in 2013.

“Refinery margins are expected to be weak for the rest of the year. Operational and product quality will continue to remain the refinery’s key focus area to maximise margin opportunities,” the company says in the  notes accompanying its results. 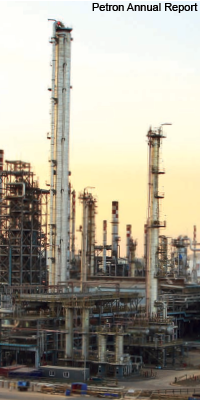 “But that’s not the case at present because the low crude prices are also being caused by weak demand for refined products. So, product prices are dropping too.”

“Demand for crude depends on refining capacity and also demand for products. Product demand is affected by global economic development. If crude prices drop too low, some production of crude with high costs will shut down and this will cause a shortage in supply, which will then drive up prices again.”

Note that Brent crude has been on a downward spiral since a high of US$115.06 per barrel in June this year, and dropped to its lowest point since 2010 of US$79.64 per barrel last Thursday.

The share prices of both Shell Refining and Petron Malaysia experienced a slight increase since the decline in crude prices.

Shell Refining’s share price, which has been on a downtrend since mid-2013, rose from a 52-week low of RM5.52 on July 30 to reach a recent high of RM6.05 on Aug 29. It surrendered some gains to close at RM5.70 last Thursday, for a market capitalisation of RM1.7 billion.

Petron Malaysia shares, on the other hand, recovered slightly from a 52-week low of RM2.68 on Oct 16, closing at RM2.79 last Thursday, for a market capitalisation of RM753.3 million.