Oil edges up on threat of US issuing new Iran sanctions 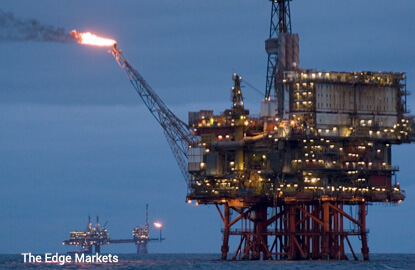 SINGAPORE/TOKYO (Feb 3): Oil prices edged up on Friday on news that US President Donald Trump could be set to impose new sanctions on multiple Iranian entities, raising geopolitical tensions between the two nations.

Reuters reported on Thursday that Trump's administration is prepared to roll out new measures against more than two dozen Iranian targets following Tehran's ballistic missile test, according to sources familiar with the matter.

Front month US West Texas Intermediate crude futures climbed 48 US cents, or 0.9%, to US$54.02 a barrel, after ending Thursday down 34 US cents. For the week, the contract is up a little over 1%.

Moves by the US to impose new sanctions on Iran is "something at the back of short-term traders' minds," said Ric Spooner, chief market analyst at Sydney's CMC Markets.

"It's on the risk radar more than it otherwise might have been," he said.

The sources, who had knowledge of the administration's plans, said the package of sanctions was formulated in a way that would not violate the 2015 Iran nuclear deal.

Supply concerns were also raised when Russia's energy minister said global oil output was cut by 1.4 million barrels per day (bpd) last month as part of the deal last year between OPEC and other producers.

"Oil markets have been supported by OPEC and as long as things hold people will look for evidence output curbs have chiselled away at inventories," Spooner said.

Novak also said Russian companies may cut oil production quicker than had been initially agreed with OPEC and that he expected the market to rebalance by the middle of this year.

Oil prices have stabilised about 15% higher than they were before OPEC and non-OPEC producers agreed in December to curb output, National Australia Bank said in a note on Friday.

"We now expect oil prices to average around the mid to high US$50s in 1Q and 2Q, before reaching the low US$60s by end-2017 and stabilising at around those levels in 2018," the bank said.

Brent prices could also come under pressure due to refinery maintenance in Europe and Asia in the first half of this year creating a situation where crude exports remain high while crude demand weakens, energy consultancy BMI Research said in a report on Friday.