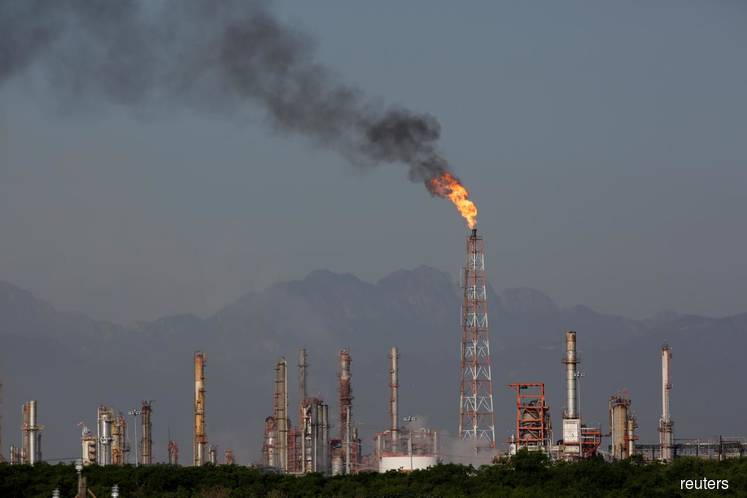 MEXICO CITY (Dec 4): With Mexico's government insisting energy companies increase oil and gas output before it auctions off more of the country's vast reserves or offers more partnerships with state-run Pemex, firms ranging from foreign majors to local players are scrambling to buy and sell blocks they already own.

The negotiations are creating a dynamic secondary market for oil acreage, which could be the only investment opportunity left for firms until leftist President Andres Manuel Lopez Obrador unblocks his predecessor's flagship energy reform that has seen no new licensing rounds since 2018.

Companies selling stakes include large foreign producers that were awarded blocks in previous rounds such as China's CNOOC and Germany's Wintershall Dea. Smaller firms including Hokchi Energy and Grupo Diavaz, are also trying to share a portion of their assets.

For sellers, allowing partners to get into their projects is a way to limit growing political and financial risks, while sharing required capital expenditure. For buyers, this secondary market can open a way into a country whose industry still holds enormous potential, although its competitiveness is fading.

"If I want to grow and there are no rounds, the only option left is to buy a stake in some of the existing," said Benigna Leiss, former country manager of U.S. Chevron Corp in Mexico. "Fortunately, regulation allows doing so."

Former President Enrique Pena Nieto awarded over 100 contracts to energy firms in 2015-2018 to explore and produce oil and gas in Mexico. His reforms also opened the door for Pemex to form joint ventures.

But Lopez Obrador's administration has suspended auctions planned for 2019 and halted farm-out opportunities until the existing projects add barrels to Mexico's dwindling output.

Now, negotiations of stakes have brought opportunities for all types of investors, ranging from promising deepwater areas at Mexico's Gulf to small onshore fields.

CNOOC, which faces heavy capital investment in Guyana, plans to sell stakes in two offshore blocks at Mexico's Perdido basin. The negotiations are expected to be done in January, the company said, without revealing names of the interested buyers.

CNOOC in 2018 said it could sell or swap some of its unit Nexen Petroleum's U.S. Gulf assets, as part of a portfolio rebalancing. But planned stake sales in Mexico are "ordinary trading" of projects for oil exploration unrelated to other regions, the firm added in an email to Reuters.

Wintershall Dea, the oil and gas unit of chemicals giant BASF, is also reshuffling its Mexican portfolio after buying independent firm Sierra Oil and Gas in late 2018, by offering a stake in an offshore block it shares with Malaysia's Petronas, according to three sources.

The Mexican government has maintained pressure on oil firms to ramp up production and help reverse 15 years of decline.

"If there are no material results soon, we don't have to offer more rounds," said Energy Secretary Rocio Nahle last month.

Lopez Obrador has also pledged to strengthen Pemex, so some of Mexico's most emblematic energy projects could be operated by the state firm.

Yet some analysts say the government is wasting time while providing scant incentive for private firms and Pemex to jointly achieve the goal of adding 1.3 million barrels per day (bpd) by 2024, a 76% increase from current output of 1.7 million bpd.

Mexico's Association of Hydrocarbon Companies (Amexhi) estimates the nation could have received an additional US$104 billion in government take through 2040, if it had not interrupted oil rounds.

"If success is not what the government expects, it will be evident that more private investment is needed,", said Ruaraidh Montgomery, director of Research at consultancy Welligence.

"Mexico's secondary market is interesting to some competitors as it allows them to monetize portfolios, but does not bring new investment opportunities," he said.

Some of the planned stake sales are driven by the need for investments to start production.

Hokchi Energy, a unit of Pan American Energy, is looking for a partner willing to share investment for the Hokchi oilfield, one of Mexico's most promising shallow-water projects, the vice president of the firm, Vinicio Suro, told Reuters.

Mexican Grupo Diavaz' director of Exploration and Production Luis Zagaglia told Reuters that the company is looking for a financial partner for the Miquetla onshore field it shares with Pemex. And Perseus Energy has put its fields Tajon A and B at Southern Tabasco state on the table, according to three sources with knowledge of the talks.

Among companies interested in buying more stakes in Mexico are Chevron, Vista Oil & Gas and Japan's Inpex Corp , according to the sources.

Perseus, Inpex and Vista Oil & Gas did not reply to requests for comment.

Shell, which recently sold a 40%-stake in three offshore blocks to Chevron, is open to more negotiations, said the president of its Mexico unit, Alberto de la Fuente.

For its part, Chevron continues interest in opportunities that meet its "investment criteria", the company's spokesperson Ray Fohr told Reuters, while declining to comment on details.