The development is located close to Bandar Sunway and Subang, which are home to many educational institutions. Picture by OCR Properties (Yolo) 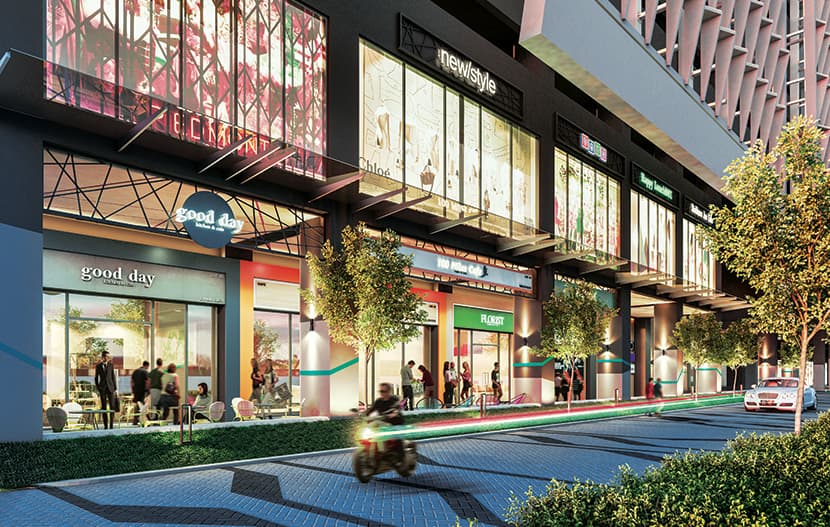 The retail spaces at YOLO aims to capture younger clients by offering an eclectic range of F&B, leisure and entertainment. Picture by OCR Properties (Yolo) 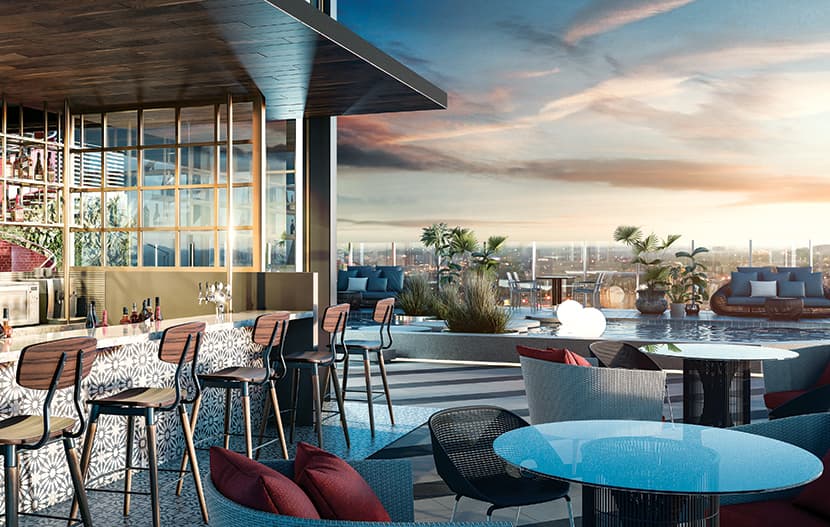 The rooftop sky bar will offer panoramic views of the surroundings. Picture by OCR Properties (Yolo) 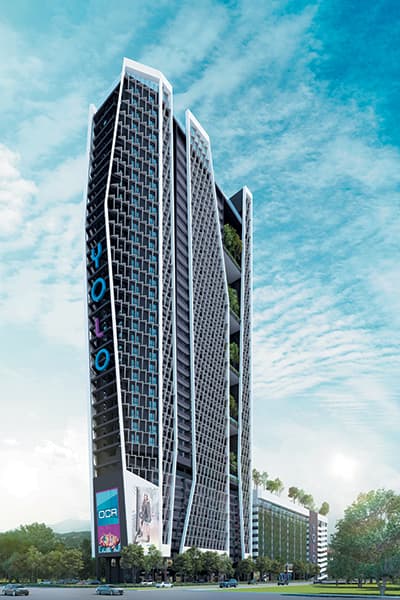 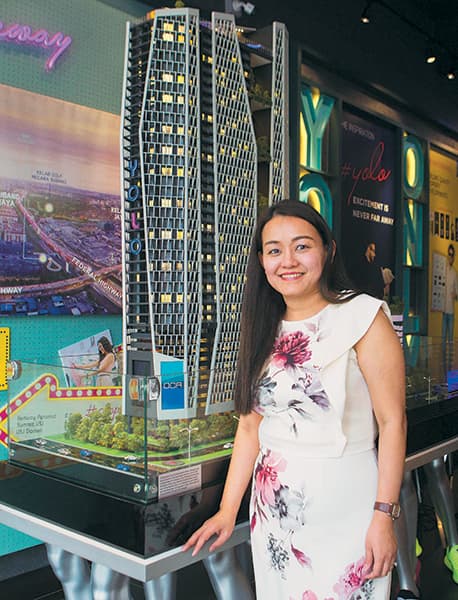 Ong: We want to create a place full of energy, excitement and positive vibes for the younger generation. Photo by Patrick Goh/The Edge

Sitting on a 1.72-acre plot adjacent to Bandar Sunway and Subang, YOLO Signature Suites by OCR Properties (Yolo) Sdn Bhd is poised to leverage the healthy rental market in the area, which is home to many educational institutions, including The One Academy, Taylor’s University, Sunway University, Monash University and INTI International College.

The leasehold commercial development will have an estimated gross development value of RM225 million and offer 395 signature suites or small office/flexible office.

The suites, which also come in dual key layouts, have built-ups ranging from 440 to 2,046 sq ft, with prices starting at RM370,000. Each suite comes with one to two car parks, depending on the size, and partly furnished with air conditioner, water heater, pantry, hood and hob, vanity basin, plaster ceiling and lighting.

In an exclusive interview with City & Country, OCR Group Bhd chief marketing officer Emily Ong says YOLO is targeted at a younger demographic. “We are looking at working professionals based in Sunway and Subang who are keen to enjoy life, are familiar with the lifestyle and surroundings and want to settle down in the area.

Rental yields are comparatively higher than in other places, she notes. “As an example, student accommodation in the area fetches RM600 to RM800 per student. We are confident of YOLO’s potential as the area has a 60,000-student catchment. As the younger generation is becoming increasingly entrepreneurial, we believe many students would be looking to start up their own businesses and YOLO would be an ideal place for them.”

According to Ong, The One Academy private art and design institute, which currently has its headquarters in Bandar Sunway is expanding and moving its campus to Leisure Commerce Square, which is next to YOLO. The new premises, she says, will be ready in December. “We are also working with The One Academy that has taken up some of the suites at YOLO.”

YOLO Signature Suites is currently 30% taken up and OCR will be offering early-bird rebates at the launch this weekend, during which it will introduce its new OCR Big Bang financial solution packages to assist buyers, especially younger purchasers.

OCR will also be offering leasing services for the signature suites. “Many investors want a hassle-free investment and as part of our effort to serve them, we have our own leasing team should they require our services. This may come in handy for outstation investors who need someone to manage their units,” says Ong.

Recreational facilities at YOLO, such as a gym, swimming pool, barbecue area and sun lounge, can be found on Level 11. “We provide, but won’t over-provide, facilities we think will be useful to our residents so the maintenance is more manageable,” says Ong. YOLO will also come with a four-tier security system that includes security guards, card access, CCTV and car park boom gate. The monthly maintenance is estimated at RM172 to RM397 for each suite.

A ‘socialtainment’ hotspot
YOLO is short for “You Only Live Once”, and in tune with that name, “we want to create a place full of energy, excitement and positive vibes for the younger generation,” says Ong.

The signature suites will be complemented by a rooftop Bangkok Theme Sky Bar that will boast panoramic skyline views, as well as two levels of retail space known as YOLO Street, which will have 22 retail units. The rooftop bar and YOLO Street will offer a total of 27,240 sq ft of space.

Conceptualised as an eclectic “socialtainment” hotspot to attract customers, especially the younger clientele, the retail components will focus mainly on F&B, leisure and entertainment. The retail spaces will be leased and managed by OCR. “We want to manage the tenant selection to ensure we create a great socialtainment scene and ambience,” says Ong. The developer is also planning to have a drive-through F&B operator at YOLO Street.

YOLO’s unique design will feature fins on the building’s façade that will give it a textural play of light and shadow, while fragmented landscapes and hanging gardens will fill the building voids. “We spent around RM10 million on the façade and quite a bit to beautify the entire development. We want to create a green and sustainable building. For example, the fin façade shades the suites from direct sunlight and on certain levels, we allow ample space for cross ventilation,” says Ong.

YOLO Signature Suites has easy accessibility to major highways such as the Damansara-Puchong Expressway, New Pantai Expressway, Federal Highway, Shah Alam Expressway and the New Klang Valley Expressway. There will be a bus station while the Mentari BRT Station is 200m away.

Finding its niche in diversification
While OCR Group Bhd’s focus is very much within the Klang Valley, the group is venturing into other parts of the peninsula such as Kuantan, Melaka and Johor Baru.

“The cities we are going into are big cities. Johor is a populated place and we are focusing on bread-and-butter landed, properties since the high-end, high-rise market is quite saturated at the moment,” says Ong.

“In Kuantan, we foresee opportunities for high-rise developments as we think it is the most vibrant place on the east coast, and businesses there are doing quite well, especially over the weekends. We also see a lot of new Chinese investments in Kuantan as well, and the government is trying to make the place a major port.”

[email protected], which has a GDV of RM250.29 million and comprises 140 serviced apartments, is aimed at overseas buyers. The average price of a 764 sq ft 1-bedroom unit is RM1.5 million.

The group has an ongoing affordable landed development, [email protected], in Kuantan, with a GDV of RM200 million. To date, 80% of the 1,124 units have been taken up.

Upcoming developments set to be launched in 2019 include 978 units of serviced apartments in Kuantan; 360 signature suites next to 3 Damansara (formerly known as Tropicana City Mall) with a similar concept to YOLO; 304 serviced suites in Melaka Raya; and a landed development of 326 houses in Bandar Dato’ Onn, Johor.

The developer believes there is still demand in the property market and sees sentiment picking up. “With the new government in power followed by the abolishment of the Goods and Services Tax, we feel the prospects are looking bright,” says Ong.

However, she observes that the younger generation tends to shy away from the idea of owning property because of the high cost of living, unaffordable prices and little savings, among other reasons. “Hence, we hope to offer attractive and practical financial solution packages like our OCR Big Bang to help them achieve their dream of property ownership.”

“In line with our tagline ‘It’s where you want to be’, as a boutique developer, we will continue to build quality lifestyle developments that appeal to the younger generation. We are committed in ensuring we deliver the best in terms of quality and services to our buyers,” she says.