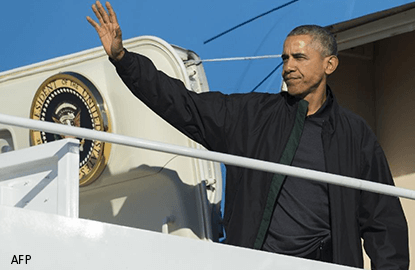 This article first appeared in The Edge Financial Daily, on November 16, 2015.

UNITED States President Barack Obama is set to challenge China when Asia-Pacific leaders gather in the Philippines this week, speaking out on a territorial row and lobbying to set pro-American trade rules.

Chinese President Xi Jinping will also be in Manila for the Asia-Pacific Economic Cooperation (Apec) summit, an annual event that is meant to forge unity on free trade within the region.

But this year’s meeting risks becoming entangled in various US-China power struggles, including over the South China Sea where Chinese island building in disputed waters has caused alarm in the US and with its Asian allies.

The global menace of terrorism will also be an unwanted talking point after gunmen massacred more than 120 people in a series of coordinated attacks in Paris last Friday.

Philippine authorities had already undertaken their biggest security operation for the summit, which will gather leaders from 21 Pacific Rim economies on Wednesday and Thursday, but they vowed after the French carnage to do even more.

While China said it wanted the summit to focus only on trade, the French attacks and US attention on the South China Sea showed this was unrealistic, according to Curtis S Chin, a former US ambassador to the Manila-based Asian Development Bank.

“One cannot separate the economic and the non-economic in today’s interconnected world,” Chin, now an Asia fellow of the Milken Institute, a non-partisan think tank, told AFP.

“That’s as true in the battle against ISIS (the Islamic State group) as in the search for a peaceful resolution to the many territorial disputes with China that haunt development in the South China Sea.”

China insists it has sovereign rights to nearly all of the sea, even waters approaching the coasts of its Asian neighbours.

The Philippines, Vietnam, Malaysia, Brunei and Taiwan have overlapping claims to some of the waters, which are home to some of the world’s most important shipping trade routes.

China’s island building in the Spratlys archipelago, which is close to the Philippines, prompted the US military to recently deploy a missile destroyer and B-52 bomber planes to the area.

China had insisted repeatedly in the lead-up to the summit that the South China Sea dispute was not relevant to the trade talks.

But US National Security Adviser Susan Rice said the disputes would be a “central issue” during Obama’s three-day trip to the Philippines starting tomorrow, and a subsequent visit to Malaysia for another regional summit.

Rice also emphasised Obama would raise the issues of “maritime security” and “freedom of navigation”, terms commonly used when referring to the dispute.

The Philippines, which has hauled China before a United Nations tribunal over the row, initially promised to respect that demand.

But Philippine foreign ministry spokesman Charles Jose said that, while the issue was not on the official agenda, leaders may discuss it at their retreat, one of the summit’s key events where the delegates speak less formally.

Obama will also use both legs of his Asian trip to promote the Trans-Pacific Partnership (TPP) mega-trade deal, which was signed last month by 12 Apec nations, but excludes China.

On the sidelines of Apec, the leaders of the TPP nations will meet for the first time since the signing.

“TPP is central to our vision of the region’s future and our place in it,” Rice said.

“[It] is a critical step towards a high-standard free trade area in Asia and the Pacific, and our goal of revitalising the open rules-based economic system that the US has led since World War II.”

China has flagged it will push on with its own effort to steer regional economic rules with a planned Free Trade Area of the Asia-Pacific (FTAAP).

China sought to champion the FTAAP at last year’s Apec summit, which it hosted, and a report would be released in Manila on its progress.

Apec members account for 57% of the global economy and 40% of the world’s population, with the diverse grouping including Papua New Guinea, Peru, Japan and Russia.

Russian President Vladimir Putin and Indonesia’s Joko Widodo are the only major leaders of Apec nations, who have said they will not attend. — AFP