NTPM Holdings to be more competitive via cost control

NTPM Holdings Bhd
(Dec 22, 64 sen)
Upgrade  to “neutral” with a target price (TP) of 67 sen: NTPM’s core earnings for the first half of financial year 2015 ending April (1HFY15) of RM16.2 million missed expectations, at 36.3% of our and 31.3% of consensus estimates. We further trim our FY15 forecast earnings by 12.6% as we expect the weakening of the ringgit against the US dollar to bring further challenges ahead.

However, we upgrade the stock to “neutral” with a lower TP of 67  sen (1.4% downside), as we believe most of the downsides have been priced in since early September.

NTPM’s 1HFY15 revenue increased 1.9% year-on-year (y-o-y) due to a better sales performance across the board. Revenue from paper products improved 1.0% y-o-y, while sales from personal care products were higher 4.0% y-o-y spurred by an increase in demand for baby diapers.

However, core earnings fell 42.1% y-o-y during the period, largely due to a surge in raw material, labour and utilities costs. Compared with first quarter (1Q)  revenue and net profit in 2QFY15 were stronger by 4.4% and 31.4% respectively.

Earnings before interest and tax (Ebit) for 1HFY15 and profit before tax (PBT) margins trended lower by 550 basis points (bps) and 570bps respectively, both its divisions booked weaker margins. Its paper product unit’s PBT margin narrowed to 10.1% from 15.7%, while its personal care segment saw a margin decline to 3.9% from 10%. Both segments have been affected by rising production costs, with the strengthening of the greenback against the ringgit being the contributing factor. It is worth noting that half of the raw materials consumed in the personal care segment are imported on US dollar terms.

We earlier expected FY15 to be a challenging year for NTPM. With its recent unfavourable foreign exchange position, we continue to expect a slight weakening of NTPM’s margins going forward. Thus, we further cut our earnings forecast by 12.6% for FY15, as we revise our US dollar/ringgit assumption to 3.30 (from 3.20), in line with our house view.

Volatile raw material prices and weaker demand remain the key risks. We trim our TP to 67 sen (from 70 sen), pegged to an unchanged 15.5 times price-earnings ratio on calendar year 2015 earnings per share, which is at a 22% discount to its peer average of 20 times. However, we lift our call to “neutral” as we believe most of the downsides have been priced in. We also believe NTPM’s ongoing cost containment and optimisation exercises will put the company in a more competitive position in the future. — RHB Research, Dec 22 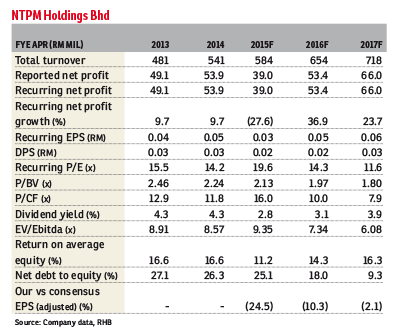