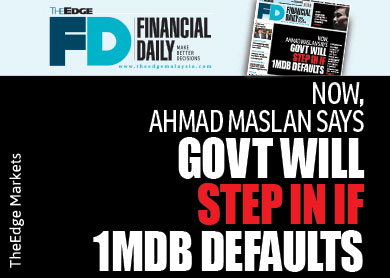 KUALA LUMPUR: In another about-turn, Deputy Finance Minister Datuk Ahmad Maslan (pic) has conceded that the federal government will step in to meet the US$3 billion (RM10.02 billion) obligations of 1Malaysia Development Bhd (1MDB) under the letter of support it gave. 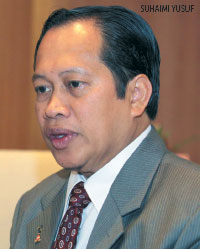 He said this in a text message reply to a question posed by The Edge Financial Daily yesterday on what Section 3 of the letter of support meant.

Ahmad, however, said this will happen only if 1MDB itself has made all efforts, including restructuring, to raise money to pay its debt but is still unable to do so.

He also explained that unlike a normal guarantee, obligations of the government via a letter of support are not listed as a contingent liability of Putrajaya.

“The key difference between a guarantee and a LOS (letter of support) is that firstly, government explicit guarantee will mean it is contingent on the government’s balance sheet whereas a LOS is not contingent as it is implicit.

“Secondly, an explicit guarantee will mean that borrowers have a direct claim to the government in the event that 1MDB defaults,” Ahmad wrote.

“In LOS scenario, borrowers will have to wait for 1MDB to restructure its assets to remedy the default and only when the assets (RM51.41 billion) are not sufficient to cover, only then the government will step in,” he added.

Ahmad came under fire in the Parliament last week when he said the government did not provide the LOS for the US$3 billion loans that 1MDB Global Investments Ltd, a wholly-owned subsidary of 1MDB, has borrowed.

The deputy minister, however, on Monday admitted that the government had issued the LOS to 1MDB for its loans. However, he insisted that it was not tantamount to a guarantee.

In a legal opinion by Tommy Thomas, a prominent lawyer specialising in corporate litigation and insolvency, and commercial and public law, the key issue in its interpretation is whether the parties intended the LOS to have legal effect.

According to Thomas, the following statements in the LOS “plainly and obviously establish that the government is undertaking legal obligations”:

(i)    The letter “is given to provide necessary financial assistance to the issuer to provide capital to the JV Co.” — Recital.

(ii)   The government “undertakes to provide necessary financial assistance to the Issuer in respect of the Debt as follows:

(b)  … Malaysia shall then step-in to inject the necessary capital into the Issuer or make payments to ensure the Issuer’s obligations in respect of the Debt are fully met.” — Paragraph 3.

(a)   subject to Paragraph 3, to subscribe for further debt or equity in the Issuer or to lend to the issuer such amount(s) so that, at any time when the Issuer has a shortfall of internal funding, the Issuer has immediately available funds sufficient to pay …

(b) “… if the Issuer fails to pay any sum owed under the Debt on the date specified for such payment to pay such sum to the Trustee.” — Paragraph 4.

(iv)  “The aggregate amount payable by Malaysia in total … shall not exceed the Principal Funds and the sum of the Interest Funds”. — Paragraph 5.

(v)   “Malaysia hereby agrees that this Letter of Support is irrevocable” — Paragraph 6.

These words are clear and without any ambiguity, according to Thomas, Malaysia has undertaken legal obligations to ensure that the debt is repaid, and, if it is not, Malaysia will pay the shortfall.

Thomas also pointed out that what is most worrying is the irrevocable and unconditional consent by Malaysia “to the enforcement of any order or judgment made or in connection with any proceedings and the giving of any relief in the English Court and the Courts of any other jurisdiction” under Paragraph 9 (iii).

He commented that by this concession, Malaysia has given up its rights, recognised in public international law for over a century, as an independent, sovereign country of not having its assets seized by a Court to satisfy a judgment of that Court.

This article first appeared in The Edge Financial Daily, on November 12, 2014.