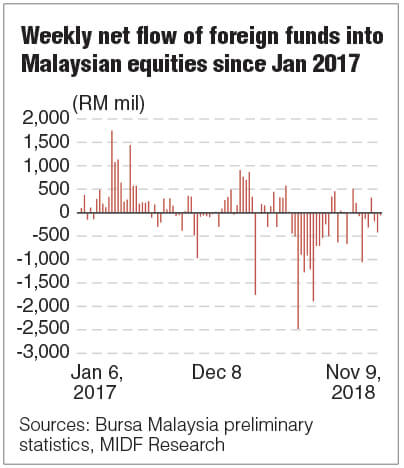 He said November is poised to be another month of outflows with the month-to-date outflow, as of last Friday, amounting to RM474.1 million net.

“While foreign investors have sold RM10.42 billion of local equities on a year-to-date basis, offsetting last year’s inflow of RM10.33 billion, Malaysia still has the second-lowest foreign net outflow among the four Asean markets that we monitor,” he said in his weekly fund flow report yesterday.

“This follows a sharp 6.4% drop in Brent crude oil price overnight as concerns about a global oversupply continue to loom. The massive outflow was in conformity with other regional peers — South Korea and Thailand.”

“Interestingly, Malaysia fared better than the said regional peers as they still experienced outflows. Foreign inflows were seen again on (last) Friday but at a measurable level of RM14 million net as uncertainty in global trade continues to haunt the Asian region.”

“Based on the provisional aggregate data for the seven Asian exchanges that we track, investors classified as ‘foreign’ offloaded US$1.1 billion (RM4.61 billion) net last week, offsetting the foreign inflows seen in the previous two weeks.

“In emerging Southeast Asian markets, more than half of them experienced foreign net buying.”