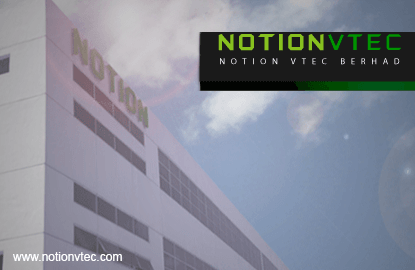 "It has been five years since the market talks about SSD taking over HDD business but HDD remains the most economical storage and is still in demand today.

"Moving forward, we are confident that for FY16, the group will recover into the positive territory and the automotive segment should be the main growth driver going forward as demand for more such auto parts continued to be robust. We think that the automotive segment will consist of more than 30% of the total revenue for FY16," Thoo told reporters after Notion VTec's annual general meeting here today.

In terms of revenue contribution, HDD accounted for 46% of 1QFY16 revenue. The camera and automotive segments contributed 26% and 28% respectively.

Today, Notion VTec shares traded unchanged at 40 sen as at 11.56am for a market value of RM107.31 million, according to Bursa Malaysia's website.