‘Not your typical manufacturer’ 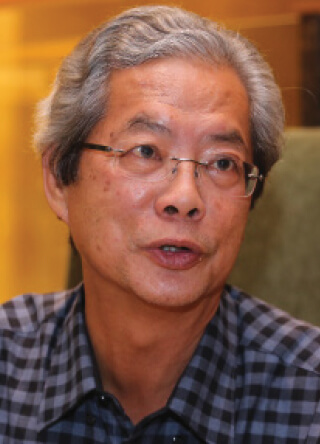 Lim: The company’s performance should not be assessed like just another run-of-the-mill manufacturer. Photo by Sam Fong

KUALA LUMPUR: After Salutica Bhd made its ACE Market debut in 2016, the small-form electronics and precision plastic parts maker’s annual net profit has declined for two straight financial years ended June 30, with the last being due to the deferred launch of its first wireless earphones developed for a client, Logitech’s consumer electronics unit, Jaybird.

In a recent interview with The Edge Financial Daily, its managing director James Lim said the company’s performance should not be assessed like just another run-of-the-mill manufacturer.

“Our top line has actually grown. What investors and funds don’t understand is that we are not your typical manufacturer. This is a technology company. You need a longer gestation period for the products to be market-ready,” he said.

Lim said its product cycle does not fit into the quarterly assessment calendar and, as such, investors should not be discouraged by its recent financial performance.

“A cable product takes about six to nine months to develop. But this is our first time developing a non-cable product, which took us a year. It is a one-time thing. It was already launched last quarter, so [the] contribution will start only in this quarter (first quarter of financial year 2018 [1QFY18]). You will see something good,” he said.

Being a Tier-1 manufacturer, with research and development (R&D) and engineering capabilities that match that of a design house’s, Lim said Salutica co-develops products with brand owners instead of just manufacturing based on specifications given by clients.

“We are not in that market. I think our in-house R&D capability is the key differentiator for us, compared to other manufacturers,” said Lim.

Salutica, he said, spends up to 5% of its annual revenue on R&D. Its 500-strong workforce in its sole manufacturing plant in Ipoh comprises 50 dedicated engineers for R&D, about 50% more from the 33 it had last year. The company even has its own software programmer, as Lim has claimed that outsourced talents cannot keep up with the company’s needs.

Additionally, Lim said Salutica has the whole skill set and required equipment in-house for product development — from design, plastic moulding and automated painting, to circuit board assembly, testing, final assembly, and even packaging and logistics. “Brand owners need only to market them,” said Lim.

This capability has allowed Salutica to take on managerial roles for key products like the once-famous Sony Ericsson feature, the “Walkman” phone, for which it was involved in parts manufacturing, material outsourcing and the overall design.

The technology can also be applied to other communication protocols other than Bluetooth, which is presently used in the bulk of its products. “Right now, the customers we have are focused on bluetooth products. But that has become a red herring to a lot of investors. They think we are a bluetooth company,” he said.

However, maintaining that Tier-1 manufacture’s standard comes with a high cost, Lim admitted. Unlike many second- or third-tier manufacturers, Salutica is Responsible Business Alliance (RBA)-compliant, a code of conduct that Lim said the top 100 technology companies in the world — including many of its customers — subscribe to and impose on their Tier 1 suppliers.

“It is something that is very difficult to place [a] monetary value on, but is most critical. We are practicing above and beyond the legal requirement of labour, environmental, and sustainability standards in Malaysia,” said Lim.

“Most funds don’t understand why we are different. Yes, to comply with RBA costs a bit more. But with compliance, I can attract big customers. They cannot have bad image publicity association. In the long term, it will create sustainability. That is more important.

“You may make less money today, but if you get the right customer, you can go very far. Who has the better chance of growth?” argued Lim.

Leveraging on capabilities in a waiting game

Meanwhile, Salutica has been widening the scope of its manufacturing skills and output over the past few years. Lim is still optimistic about what he terms the company’s three-prong business strategy. Through this, Salutica will continue its focus on its core business of original equipment manufacturing (OEM), while cultivating a close technological partnership with its clients. It hopes to leverage on these competencies to further develop its own Fobo brand.

In the spirit of long-term partnership, Salutica has assured its key customers — which includes Logitech, Sony and Canon, among others — that Fobo will not compete in the same market. “As you see, their customers are in lifestyle products like bluetooth headsets, smartwatches [and] speakers. We are doing marketing trackers and [a] tyre pressure monitoring system (TPMS) at the moment.”

Fobo was first introduced to the market in 2014. Lim previously painted a positive outlook for the brand’s prospects. However, sales of its non-OEM segment, which includes Fobo, declined to under 5% of total revenue in FY17, from 10% in FY16.

“This is a waiting game,” said Lim. “We are opening our own brand for the first time, and launching [it] from Malaysia, so of course there are a few perception hurdles we have to overcome when we are selling to the US and Europe,” he explained.

While Fobo is now No 2 after Schrader International in global sales of the TPMS for bikes, sales of its car and commercial vehicle versions have stayed flat. But that will change in time, Lim said.

“Fobo Ultra for commercial vehicles was more complicated than we initially thought. Negotiations with fleets and logistics firms took longer than expected because most fleet owners were sceptical about a product that was made in Malaysia.

“But [sales] have picked up slightly at home,” said Lim. All MRT (mass rapid transit) feeder buses in Malaysia under the Volvo brand, according to him, have been equipped with Fobo Ultra since the end of last year.

Meanwhile, Lim said Salutica is looking to increase sales of its Fobo Tire (for cars) by co-branding the product with local car manufacturers to participate in the aftersales market. “We have been selling them cheaper in Malaysia, but this is another one of our tactics. I hope to see the project kick off within three months.”

The automotive market may prove to be lucrative to Salutica beyond its Fobo brand.

While sales of Airbar — managed by brand owner Neonode — have been limited as Neonode has capped production of its motherboard in Sweden to focus on R&D, Lim said the prevailing technology has garnered interest from the automotive industry.

“How Airbar works is coincidentally what the auto market needs,” said Lim. The technology — patented by Neonode — uses light to detect motion, unlike the current radio frequency technology used in automated doors, which is inferior in terms of accuracy.

“You can see [that] Neonode is basically refocusing on long-term benefits. Because its production line in Sweden is also used for R&D purposes, production of Airbars has been limited by that.”

The automotive companies will need to test the product, which Lim thinks will take one to two years to complete. “We have to be patient. Trust is key. When the talks bear fruits and they need the volume, that is where we, as their manufacturing partner, will come in,” he said.

Back in 2016, Lim told the daily that Neonode was talking to personal computers and laptop manufacturers to build AirBar into their new models. With Neonode’s self-imposed production limit, it will be interesting to see if the automotive venture is worth the wait.

Fobo, meanwhile, also has another product in the form of a mobile/crowd-sourced location tracker. Unlike its TPMS series, which raised US$100,000 in crowdfunding — nearly four times its original target of US$28,000 (RM118,720) — the tracker, dubbed “Fobo Tag”, exceeded its crowdfunding target of US$30,000 by only 23%.

According to Salutica, it typically costs up to RM5 million to develop a small-form precision plastics product from the ground up. Competitors are already infringing on Salutica’s intellectual property in the Fobo Tag technology, which Lim said the company is addressing.

Marketing and manufacturing are two different ball games and juggling both is no easy feat. With Salutica — traded at RM1.54 last Friday, with a trailing 12-month price-earnings ratio of 30.87 times — it remains to be seen if the company is venturing in the right direction.