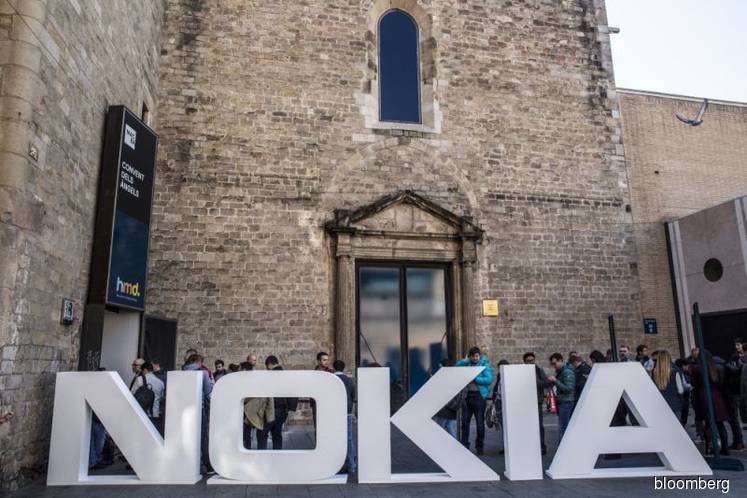 The company is working with advisers to consider potential asset sales and mergers, the people said, asking not to be identified because the information is private.

Nokia shares have lost roughly a third of their value over the past year before news of its deliberations. The company’s American depositary receipts rose as much as 13% Wednesday. The ADRs closed up 6.1% to $4.15 in New York trading, giving the company a market value of about $23.5 billion.

The firm cut its outlook and suspended its dividend in October, saying it’s not expecting a major recovery in profit until 2021. That’s ratcheting up pressure on Chief Executive Officer Rajeev Suri to act.

Deliberations are ongoing, and there’s no certainty they will lead to a transaction, the people said. A representative for Espoo, Finland-based Nokia declined to comment.
Possible Combinations

One possibility Nokia could also consider is combining with a competitor like Ericsson AB or partnering in certain business areas. Still, such a move would face significant hurdles including political pressure to preserve jobs as well as antitrust scrutiny. A representative for Ericsson declined to comment.

The limited number of direct rivals to Nokia would also require the company to consider interest from further afield -- like technology companies or wireless operators -- if it were to ever seek a full sale.

The December announcement that Nokia Chairman Risto Siilasmaa would step down stirred speculation about deeper changes at the company. The firm is in a fierce rivalry with Ericsson and China’s Huawei Technologies Co., as the three dominant players seek to benefit from phone carriers’ investments in next-generation mobile networks.

“Nokia’s return to sustained growth and profitability has been delayed by its struggle to transition to a cost-competitive 5G hardware design, impeding its ability to compete, in our view. The 5G spending cycle is ramping up as commercial launches gain momentum, putting Nokia at risk of losing early awards.”

The U.S. should be “actively considering” investments into Nokia or Ericsson to counter the threat posed by China’s dominance of emerging 5G technology, Attorney General William Barr said this month.
Huawei Rivals

Larry Kudlow, President Donald Trump’s top economic adviser, later said the U.S. government isn’t in the business of buying companies. He has since announced plans by the White House to hold a conference with Huawei rivals to try to accelerate development of affordable competing products.

Nokia warned this month that, excluding China, its addressable market is likely to be stagnant this year compared with 2019.

As it struggles to catch up with competitors, Nokia’s acquisition of French rival Alcatel-Lucent in 2016, which helped to broaden its offering, may have slowed down development of new products as it contended with a complicated integration process.