No surplus cash distribution by RHBCap to shareholders

RHB Capital Bhd
(April 14, RM7.96)
Maintain hold with a target price (TP) of RM8.30. As expected, RHB Capital Bhd (RHBCap) announced its widely-anticipated internal reorganisation and rights issue to raise up to RM2.5 billion. The proposed corporate exercise will be effected in the following stages: RHBCap will undertake a renounceable rights issue to raise up to RM2.5 billion, pricing the rights shares at a 20%-30% discount to the theoretical ex-rights price closer to the price fixing date; RHBCap will inject the rights proceeds into RHB Bank; RHB Bank will use the capital injected coupled with issuance of new RHB Bank shares to acquire RHBCap’s direct operating subsidiaries — RHB Investment Bank and RHB Insurance — at book value; RHB Cap will use the cash from the disposal of its direct subsidiaries to retire existing holding company debt of RM3.1 billion before being liquidated, and distribute RHB Bank’s entire shareholdings of RHBCap to shareholders of RHB Cap via a distribution-in-specie after which RHB Bank will assume the listing status of RHBCap.

Assuming the rights shares are priced at a 25% discount to the current theoretical ex price, we estimate 420 million new shares will be issued, implying a potential earnings per share dilution of 7.8%, after factoring in interest savings of RM88.4 million from the debt repayment at holding company and tax savings of RM32 million. However, the elimination of the goodwill at RHBCap level will help reduce the book value of the new RHB Bank by an estimated RM1 billion, which will help raise its 2015 return on equity (ROE) to an estimated 11% from our current forecast of 10.1% 2015 ROE for RHBCap, while Common Equity Tier 1 (CET1) will increase to above 11% from current group CET1 of 9.8%. Although the higher estimated ROE of the new RHB Bank will lead to a higher fair price-to-book (P/B Ratio) multiple of 1.24 times, we note the lower estimated book value of RM6.45 per share will more than offset the improved P/B Ratio multiple from the higher ROE.

Apart from eliminating the double leverage issue at the holding company level and having a more efficient tax structure, management also highlighted that the revamped structure will provide the scope to raise dividend payouts but potentially in conjunction with the continuation of its dividend reinvestment plan, which may drag ROE depending on the take-up rate. To reduce the impact of goodwill arising from the transaction, RHB Bank is likely to acquire the key subsidiaries of RHBCap (RHB Investment Bank and RHB Insurance) at their current book value estimated at RM3.1 billion and RM334.2 million respectively. This works out to slightly more than the RM3.1 billion required by RHBCap to retire its existing holding company debt. Management has indicated that there will be no surplus cash distribution by RHBCap to its shareholders apart from the distribution of new RHB Bank shares to RHBCap’s shareholders.

Assuming all shareholders subscribe to their respective rights entitlements, there will be no change in the shareholding structure of the new RHB Bank as the direct subsidiaries of RHBCap will be acquired at book values.

The group’s general outlook for 2015 will remain relatively challenging on the back of upward normalisation in provisions, potential dilutive capital raising and relatively sharp moderation in loan growth from a fairly high growth base in 2014. — UOB KayHian Research, April 14 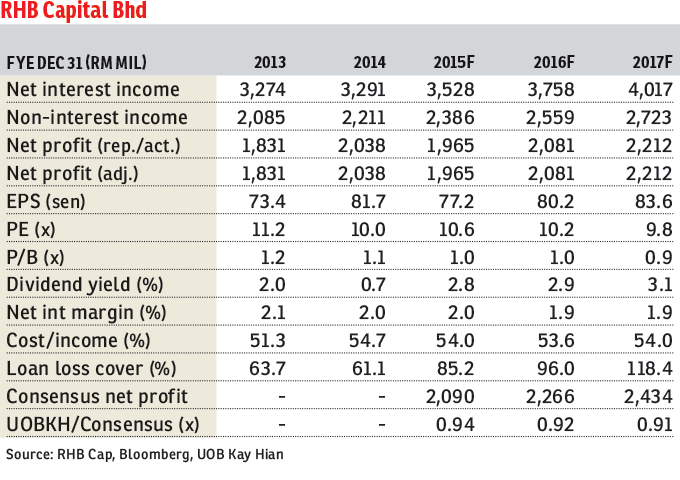