No decision yet on ECRL’s bumiputera quota 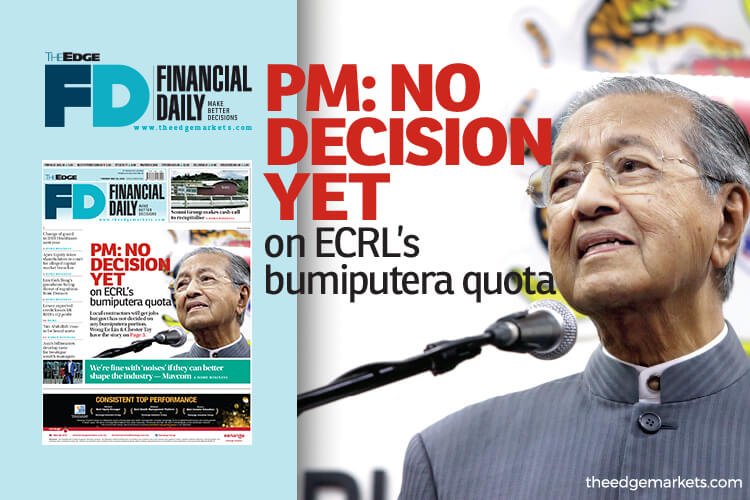 PUTRAJAYA: Prime Minister Tun Dr Mahathir Mohamad said the government had yet to decide on imposing a bumiputera quota on the civil works that are reserved for local contractors in the East Coast Rail Link (ECRL) project.

“We have decided that local contractors [will] be given jobs, but whether they are bumiputeras or non-bumiputeras has not been decided,” Dr Mahathir told reporters here after chairing the annual National Finance Council meeting.

He was commenting on reports that the Malaysian Bumiputera Contractors Association had called on the government to provide a special quota of at least 20% of the local work portion to bumiputera contractors.

The association had reportedly said the request was “reasonable” as bumiputera contractors would find it difficult to compete for any jobs from the ECRL or share it with other local companies without the special quota.

Govt yet to decide on toll rate reduction

Meanwhile, he told reporters yesterday that a decision had yet to be made on reducing toll rates in the country, and that the government is now “facing some issues” on the matter despite Pakatan Harapan’s promise to abolish tolls.

He reiterated his position that the government’s burden will increase substantially if the tolls are to be abolished. “For example, if we abolish the North-South Expressway (PLUS) toll, the government has to buy over the highway for RM30 billion. [It is] better to use that money to pay debts, [which] can reduce our burden a bit,” Dr Mahathir said.

“That is Tun Daim [Zainuddin]’s opinion, but we have yet to study how are we going to reduce the toll rates,” said Dr Mahathir.

Recall that in February this year, Putrajaya announced that it had begun talks with Gamuda Bhd to negotiate the acquisition of four highway concessions that the company has a majority stake in, with the aim of abolishing toll collection on these highways.

This was the “first step” the Pakatan government was taking towards fulfilling its election promise to abolish toll collection in stages to alleviate the cost of commuting.

Upon successful takeovers of these highways, the government intends to abolish the existing toll mechanism and replace it with a “congestion charge”, where commuters will have to pay a fee equivalent to the existing toll for six hours of the “peak period” a day.

This means that during the “off-peak period” of between 11pm and 5am, commuters will be able to travel on the highways for free. During other “normal” travelling hours, commuters will enjoy discounted rates of up to 30% compared with existing toll rates.

The revenue collected from the congestion charge will go towards the operations and maintenance of the highways and repayment of borrowings.