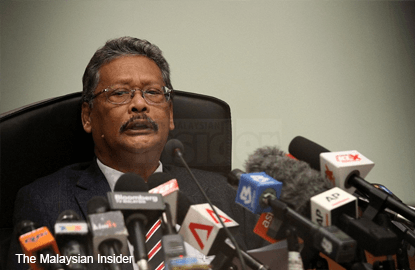 KUALA LUMPUR (Jan 26): Datuk Seri Najib Razak has been cleared of any criminal wrongdoing, the attorney-general said today, after close to six months of investigations into the RM2.6 billion channelled into the prime minister’s bank accounts and into Finance Ministry-owned firm, SRC International Sdn Bhd.

Tan Sri Mohamed Apandi Ali, who is also public prosecutor, today told a packed press conference at his office in Putrajaya there was “insufficient evidence” to implicate the prime minister.

The three papers are one on the RM2.6 billion donation and two on SRC International which had taken a RM4 billion loan from the Retirement Fund Inc or KWAP. Apandi today also cleared Najib of any wrongdoing in relation to SRC International.

Apandi said that based on evidence from witnesses and supporting documents submitted by the MACC, the sum of US681 million (RM2.08 billion) deposited into the personal accounts of the prime minister between March 22, 2013 and April 10, 2013 was a personal donation to Najib from the Saudi royal family which "was given to him without any consideration".

"MACC in their investigation personally met and recorded statements from witnesses, including the donor, which confirmed that the donation was given to the PM personally," he said.

Apandi said he was satisfied that there was no evidence to show that the donation was a form of gratification given corruptly.

"Evidence obtained from the investigation does not show that the donation was given as an inducement or reward for doing of forbearing to do anything in relation to his capacity as a prime minister," said Apandi who read a statement from a prepared text.

Furthermore, the A-G said the prime minister returned US$620 million (RM2.03 billion) to the Saudi royal family in August 2013, because the money was not utilised.

“There (is) no evidence to show that Yang Amat Berhormat PM had any knowledge and, or was informed that the monies had been transferred into his personal accounts from the accounts of SRC International.

“There (is) no evidence that YAB PM had given any approval for the transfer of monies from the account of SRC International into his personal accounts,” Apandi said.

Based on the evidence, the A-G said he was satisfied that no criminal offence had been committed in relation to the said RM2.08 billion.

A larger tranche of US$681 million was also transferred ino Najib’s accounts, originating from a British Virgin Islands company and going through Falcon Private Bank in Singapore, they reported.

MACC had recorded statements from more than 100 witnesses, including Najib and the individual who allegedly gave RM2.6 billion.

The agency first submitted investigation papers to the A-G on Dec 31, and had the papers returned with requests for more explanations on Jan 18. It resubmitted the papers last week.

Shukri said the commission filed a request with the A-G to obtain mutual legal assistance (MLA).

Apandi said today since no criminal offence had been committed, there was “no necessity” for Malaysia to make a request for an MLA to any foreign states to complete the investigation by the MACC in relation to the donation.