With no board rep, QL Resources sells off entire 38.6% stake in Lay Hong 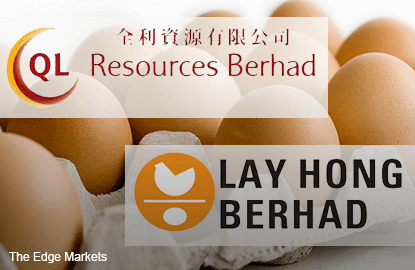 KUALA LUMPUR (Sept 11): QL Resources Bhd has sold off its entire 38.6% stake in Lay Hong Bhd for RM60.59 million today, citing the lack of board representation and the inability to influence the latter's corporate direction as its reason for the move.

The disposal, which came about a year after its sole representative on Lay Hong's board, Chia Mak Hooi, was not re-elected as a director, is expected to net it a total gain of RM18.87 million, considering that its cumulative cost of investment in the poultry firm to date stood at RM41.72 million.

Its move came three days after Lay Hong announced to Bursa Malaysia that it has re-designated its group managing director Yap Hoong Chai as its new executive chairman.

The controlling shareholder of Lay Hong is the founding Yap family and QL Resources was the second biggest shareholder prior to its stake disposal.

In a filing to Bursa Malaysia, QL Resources said it has disposed of all its 38.63% shareholding — a total of 19,865,700 ordinary shares of RM1 each in Lay Hong — at RM3.05 apiece via a direct business transaction on Bursa.

The disposal consideration was 4.04% of QL Resources' audited consolidated net assets as at March 31, 2015, it added.

QL Resources said the basis of arriving at the price was after taking into consideration its cost of investment to date in Lay Hong.

This leaves RM376,856 to be recognised as its current period's disposal gain.

"As QL does not have any Board representation in Lay Hong and is unable to influence its corporate direction, QL has decided to dispose of and realise its investment gain.

"The board of directors is of the opinion the said disposal is in the best interest of the company," it said.

Recall that QL Resources had launched a conditional general offer for Lay Hong at RM3.50 per share in September last year when Chia failed to be re-elected as a director to Lay Hong. At the time, QL Resources held a 26.81% stake in Lay Hong.

It went on to accumulate Lay Hong shares until it exceeded the 33% shareholding threshold, thereby triggering a mandatory takeover offer for Lay Hong. With the takeover offer and open market purchases, the company's stake reached 39%, but failed to wrest management control from the Yap family.

It is understood that QL Resources' build-up of a sizeable stake in Lay Hong has not gone down well with the founding Yap family, even before the takeover offer.

Yap, 65, is a founding member of the group and brother to two other Lay Hong directors, Yeap Weng Hong and Yeap Fock Hoong. Yap was first appointed to the board of directors of Lay Hong on Sept 27, 1983.