No approval yet for high density project in Batu Ferringhi, says council president 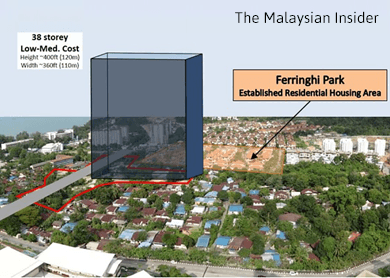 KUALA LUMPUR (Jan 14): A controversial mixed development plan that will increase population and building density at Penang's idyllic Batu Ferringhi tourism belt has not been approved, the local authority has said, assuring residents and stakeholders in the area that their objections would be considered when processing the project's application.

Penang Island Municipal Council (MPPP) president, Datuk Patahiyah Ismail, said the plan which locals feared would cause congestion, may not even be passed.

She said the authorities will hear what residents and stakeholders have to say upon submission of formal objections towards the project proposal.

The Malaysian Insider had reported the local community's alarm that over-population and harm to Batu Ferringhi's environment would be caused by the mixed development project that would include high-rise living and a shopping mall.

The residents who sighted an MPPP document on the density change for a planned project there said it also raised questions over the state authority's planning and decisions on future development of the island in the northern part of Malaysia.

According to the residents, the earlier proposed plans appeared to include a 38-storey low-medium cost block of flats, a 48-storey medium-cost block and a 49-storey condominium tower. It also had a shopping mall.

The project is planned on the site of Kampung Chetty whose residents are being evicted with compensation.

Asked if in principle the MPPP's planning policy accommodated such high density in the tourism belt, Patahiyah said council officers would need to refer to the plans before deciding.

"There are many factors that need to be considered," she said without elaborating.

It is understood that the first hearing on the matter was held on September 30 last year and the developer was asked to revise the proposal. Should residents object again following the processing of the revised application, the matter would have to be heard by the State Appeals Board.

The Batu Ferringhi community comprises a mix of Malaysian locals, expatriates under the Malaysia My Second Home programme, retirees and self-employed foreigners.

Located by the beach, the tourist area is favoured for its seaside environment, greenery and low population and building density.

Those most likely to be affected live in about 18 homes in the Sungai Mas neighborhood which is within 20 metres of, and directly adjacent to, the project site.

The system, which allows building applications to be processed and monitored through a web-based portal, will be operational on February 7.

"Currently, the council is facing restrictions in monitoring the processing of every building plan application, in gathering development data and statistics, and in delivering the plans processing service more effectively and transparently," he said.

"The system is expected to boost the council's KPI (key performance index) towards processing applications within 37 days as set under the Urban Wellbeing, Housing and Local Government," he added.