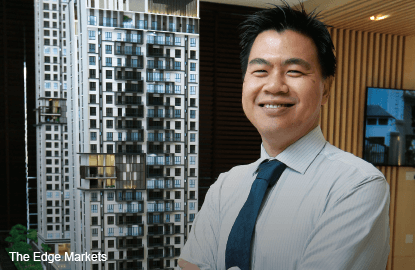 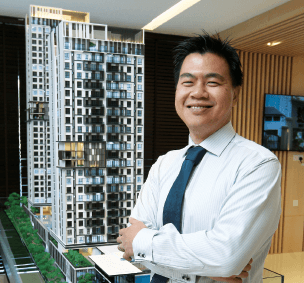 Despite the soft property market, Loh & Loh Corp Bhd is going ahead with the launch of its freehold NK Residences in the Dutamas/Segambut area, known as North Kiara, in early September.

By catering to the needs of the people and ensuring the price is right, it is confident NK Residences will do well.

Loh & Loh Corp, which is known for its construction business, is involved in civil engineering jobs, especially water-related infrastructure projects. The group, which celebrates its 50-year Golden Jubilee this year, ventured into property development in 2007, in a move to rely less on construction income.

NK Residences, on a 2.5-acre site, will comprise 200 condominiums spread over two blocks of 24 and 27 storeys. The gross development value of the project, a joint venture with the undisclosed landowner, is about RM200 million.

“We are aware that the overall market sentiment is not good, so we have designed our products to make them more affordable and put in facilities — half of which are for children —that cater for the needs of the target market,” he adds.

He believes the weak sentiment will prevail for another 1½ to 2 years. “It is now a buyers’ market, and so developers will have to be innovative to sell.”

“Looking at the busy lifestyle nowadays, most parents only have time for their children on the weekends. Most condominiums normally do not have enough space and facilities for families, so they have to go out elsewhere.

“We thought, why not let there be these facilities at home so that they can enjoy their family time within the comforts of their home at any time,” says Loh.

Every unit is a corner unit, with a north-south orientation to maximise natural ventilation and avoid direct sunlight. The units, with a minimum of three bedrooms, will have built-ups of between 1,435 and 2,565 sq ft, and every bedroom comes with an ensuite bathroom.

Priced at about RM600 psf, the units are selling for RM800,000 to about RM2 million each. Each unit will be allocated two parking lots.

Each floor will have a maximum of four units, serviced by three lifts. Each unit comes with a dry and wet kitchen, powder room, maid’s room and laundry area, while the bigger units will also have a study room, private lift lobby and additional entrance via the yard.

Loh reveals that while the initial idea was to build units with a built-up of about 1,200 sq ft, the final decision was a minimum of 1,435 sq ft to maximise privacy and comfort.

“We want to make sure every area has its proper space. Bedrooms are placed in a separate zone away from the communal areas. The living and dining rooms are large enough for the family to enjoy their time together. The laundry area is a proper area, and is separated from the wet kitchen.”

Raphael Wong, team manager at Real Estate Finders (MY) Sdn Bhd, says the pricing for NK Residences, for a high-end development in North Kiara, is reasonable compared with nearby developments.

He also lauds the decision to allocate two parking lots per unit as parking has been a concern in the area.

North Kiara used to be a medium-cost area and the older developments normally do not provide enough parking bays, so residents have to park by the streets, he says. “If NK Residences provides enough parking lots, then they shouldn’t have a problem selling.”

In his opinion, North Kiara should remain a purely residential area as neighbouring Mont’Kiara already has an established commercial component.

“If any developer wants to launch a commercial development in North Kiara, it must be big enough or there won’t be enough shoppers.  The commercial component in Mont’Kiara is established, including the likes of Publika, and people will prefer to go there.”

Traffic congestion has always been a nightmare for North Kiara residents, but Wong is confident that the situation will improve upon the completion of the flyover, slated for 2017, from North Kiara to the Duta–Ulu Kelang Expressway (DUKE).

After NK Residences, Loh & Loh Corp will launch Panorama Residences in Kelana Jaya by the fourth quarter of this year. Located near the Malaysian Airlines Training Centre and 200m from the new mass rapid transit station, the RM300-million project will comprise serviced apartments on commercial land.

While most developers would build mixed-use developments on commercial land, Loh decided to go against the grain as he believes it will bring down the standard of a property.

“Also [for a mixed-used development], you need to make sure it has separate entrances for commercial and residential components to reduce traffic congestion and ensure ease of entry and exit,” he notes.

The freehold project, on 3.05 acres, is targeted at first-time homebuyers. It will offer a total of 473 units, with built-ups ranging from 700 to 990 sq ft and 1, 2 and 3-bedroom options. The majority will be 2-bedroom units, so it will be an affordable option for the target market, Loh says.

“As the name suggests, this development will offer panoramic views of the surrounding Subang and Glenmarie golf courses, as well as the lakes and parks in Kelana Jaya.

“We oriented the units in such a way that all will have a view, most of them of the golf course. That’s why the design of the two condominium towers is not the regular shape we normally see,” says Loh.

A 2-storey sports podium will house facilities including a gymnasium, game room, badminton and basketball courts as well as an interconnected elevated jogging track. There will also be a community park with facilities like a tennis court, barbecue terrace, picnic terrace, play field and walking path.

Most of the facilities will be located at the entertainment deck, including a 50m swimming pool, sauna room, steam room, games corner, barbecue terrace, pool deck and party deck. Almost an acre, or 35% of the development, will be allocated for green areas.

Loh & Loh Corp hopes to achieve an annual turnover of RM550 million for the financial year ended Dec 31, 2015, with one-third contributed by the property development segment.

Loh believes it is now a good time to buy land as the property market is weak, but the developer has yet to come across a suitable parcel.

“For now, we don’t have much landbank because we only ventured into property development a few years ago. We are open to joint-venture opportunities and we are not specifically looking at any area because we don’t want to limit ourselves and miss any opportunity.”

Currently, the company is planning a gated-and- guarded development, called Emerald Heights, on 65 acres in Kota Emerald in Rawang.

The freehold development, next to BRDB Developments Sdn Bhd’s Taman Sari Rawang, will be divided into three phases. The project will offer 212 two-storey link homes, 254 two-storey semi-detached homes and 28 two-storey bungalows, with built-ups of 2,000 to 3,000 sq ft. Indicative selling prices range from RM600,000 to RM1.2 million.

The first phase will be launched in the first quarter of 2016 and the entire development is expected to be completed in five years.

Loh says the company believes in a prudent approach to business while delivering value. “We are a construction group, so when we ventured into property development, we did it step by step to understand and learn about the industry.

“We need to develop quality [products] and good designs for our buyers or clients. Unlike the construction industry where we only face one client, property development has many as every owner is a client,” he says.

To assess and ensure the quality of its projects, Loh & Loh Corp has implemented Conquas, a quality assessment system developed by Building Construction Authority of Singapore (BCA). The company’s projects have since scored an average of 78.3 out of 100, Loh says.

Its latest development, The Airie in Sri Damansara, has won two awards — the MLAA Award and the Best Residential Development, Malaysia Award, from International Property Awards. MLAA is organised by the Institute of Landscape Architects Malaysia.

This article first appeared in Property, digitaledge Weekly, on August 3 - 9, 2015.