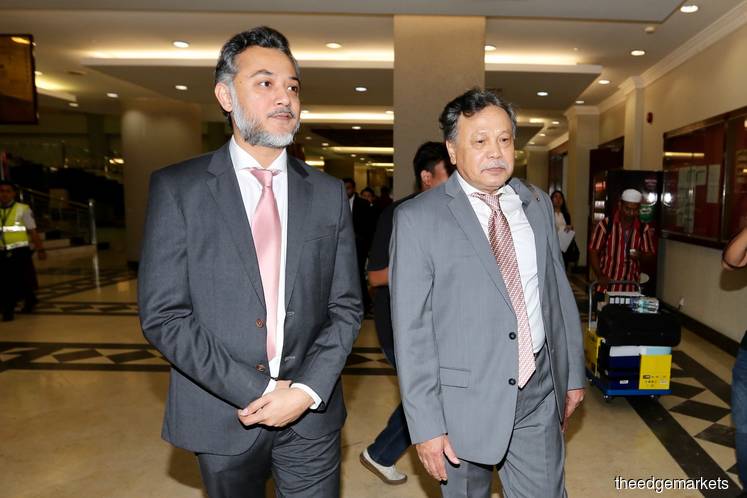 It has been 12 years since NFC was granted a RM250 million loan by the Federal Government in December 2007 to set up and operate a national feedlot centre in Gemas, Negeri Sembilan.

The defendants, most of whom are former Minister of Women, Family and Community Development Tan Sri Shahrizat Abdul Jalil’s family members, are accused of misappropriating and wrongly using RM118 million out of the RM250 million loan granted.

Senior Federal Counsel for the government Azizan Arshad told the court in his opening statement that Mohamad Salleh (pictured, right) had, in a breach of trust, misappropriated the funds to all the defendants, which had caused the government to suffer losses.

The other defendants are Mohamad Salleh’s three children and seven other companies owned by the family including NFC.

Azizan had told High Court judicial commissioner Anand Ponnudurai that the government is seeking RM253.62 million, representing the sum owed to the government, together with annual interest of 2% starting May 1, 2019, until the date of the full settlement.

Azizan said that on Dec 6, 2007, the federal government entered into an agreement with NFC to grant the latter a RM250 million loan to partially finance the setting up and operation of a national feedlot centre in Gemas, Negeri Sembilan.

“The assets of the first defendant were frozen and seized by the Royal Malaysian Police following several criminal charges. However, the first defendant agreed to utilise part of the monies kept in escrow by the auditor general amounting to RM35.5 million to settle its outstanding instalments for 2012 and 2013,” he said.

He then said the Malaysian government had issued letters to the first defendant when the loan was not paid for again in 2014.

The government had issued a warning to the first defendant dated March 21, 2014 to remedy the breaches of contract within 90 days.

“By a letter dated Sept 4, 2014, to the first defendant, the Government of Malaysia declared an event of default under the Facility Agreement and demanded a repayment of the entire sum owed,” he said.

According to a writ of summons, the High Court also ordered the appearance of the Salleh family and other defendants at its registry.

In response to Finance Minister Lim Guan Eng’s announcement on the latest claims against NFC on May 20 last year, Mohamad Salleh is reported to have issued a statement, saying that a new buyer of NFC is willing to fully settle the loan and that Prime Minister Tun Dr Mahathir Mohamad has been informed accordingly via a letter dated Nov 21, 2018.