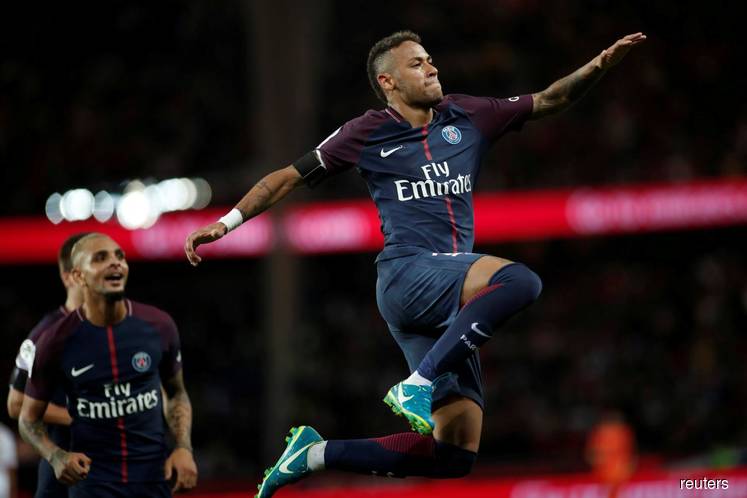 BARCELONA (June 3): Brazil talisman Neymar returned in style with a dazzling goal in a 2-0 World Cup warm-up win over Croatia and Spain goalkeeper David de Gea made a rare error in his team's 1-1 draw with Switzerland on Sunday.

Peru captain Paolo Guerrero celebrated his reprieve from a doping ban by scoring twice in a 3-0 victory over Saudi Arabia days after being given the all-clear to play in his side's first World Cup since 1982.

Costa Rica eased to a 3-0 win over Northern Ireland with two headed goals from corners and a strike from Joel Campbell, lifting their hopes of getting out of a daunting Group E also containing Brazil, Switzerland and Serbia.

Paris St Germain forward Neymar allayed fears a long injury layoff since hurting his ankle and metatarsal in late February would harm his chances of making an impact in Russia with an impressive display from the bench in his first game back.

The world's most expensive player skipped past two defenders before blasting the ball in off the underside of the crossbar to put Brazil ahead against Croatia in the 69th minute.

Liverpool forward Roberto Firmino sealed the win for Tite's side with a dinked finish in stoppage-time at his club's home Anfield as Brazil confirmed their credentials as one of the favourites to win the tournament.

"He came back better than I expected. I expected much less, because it is a process," Tite said of Neymar's return.

"He is a player that is different but he can't be given all the responsibility to decide the game, that's not humane, he is a key part but not everything."

Spain are also expected to make a big impact in Russia after their group-stage exit in 2014 but they were left frustrated by Manchester United goalkeeper De Gea's inability to catch a soft shot from Stefan Lichtsteiner which allowed Ricardo Rodriguez to tap in and cancel out Alvaro Odriozola's volley.

Lopetegui's side had two-thirds of possession and looked in control of the game until De Gea's mishap, although they lacked dynamism and were a far cry from the ruthless side who hammered Argentina 6-1 in their last game.

"I'm sure in other games we'll be able to make the most of half the amount of chances we had," the Spain coach said.

"I'm pleased that we were able to create lots of chances and they barely created opportunities against us."

The 34-year-old Guerrero netted Peru's second and third goals as they outclassed fellow World Cup qualifiers Saudi Arabia in the Swiss town of St Gallen after Andre Carrillo had opened the scoring with a stunning volley.

It was Guerrero's first appearance for Peru since the World Cup qualifier in Argentina last October when he tested positive for a cocaine byproduct — contained in a tea he drank and which he says he ingested unknowingly.

The Swiss Federal Tribunal agreed on Thursday to temporarily lift a 14-month ban pending an appeal, clearing him to play in Russia.

"It was very emotional, for him, for his team mates, for all the supporters, and for his family and I am very happy," Peru coach Ricardo Gareca said.