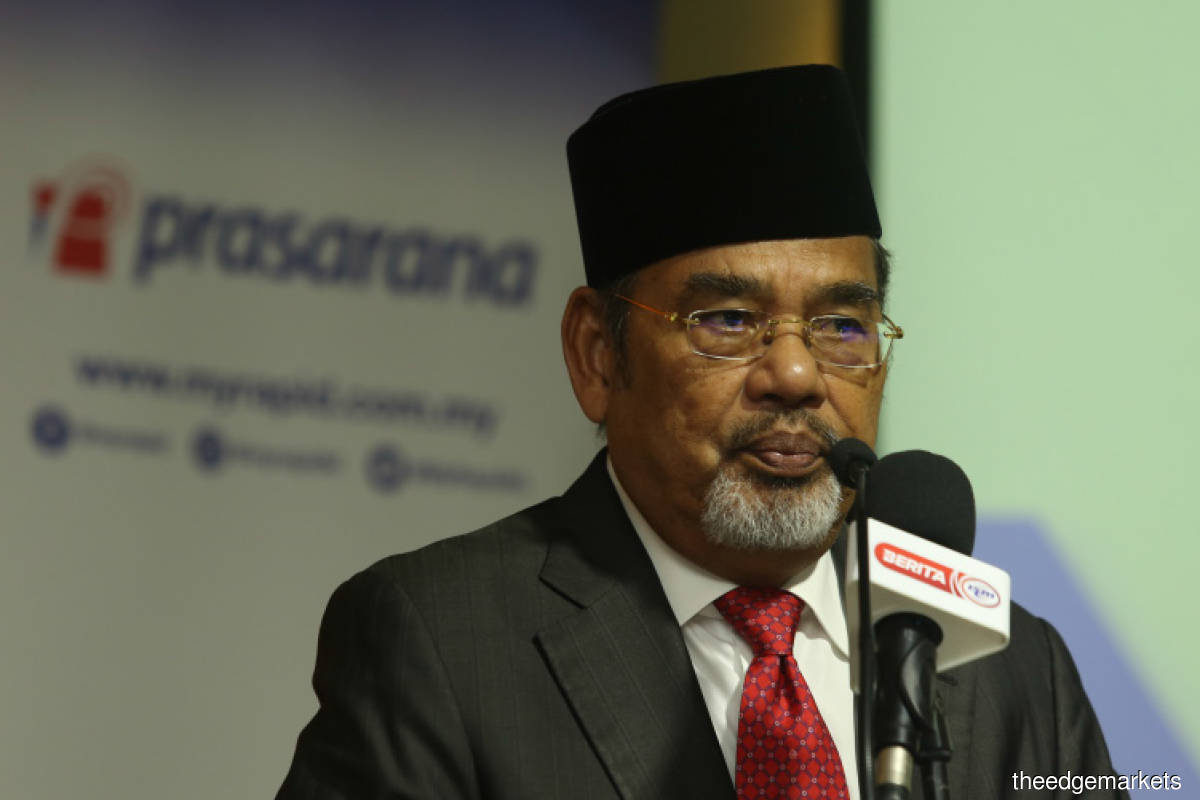 PRASARANA Malaysia Bhd chairman Datuk Seri Tajuddin Abdul Rahman is looking to make significant changes at the rail and bus transport operator — some of which may raise questions about the leadership and direction of the government-owned company.

For starters, documents viewed by The Edge reveal that Tajuddin, who was appointed chairman on May 11, had sought the termination of the contractors of the transport-oriented development at the Dang Wangi light rail transit (LRT) station, with Prasarana looking to play a more prominent role in the project and eventually move its office to the new development. The project going on at the LRT station is Latitud 8, a mixed-use commercial development with a gross development value (GDV) of RM1.2 billion.

According to the documents, Prasarana may have to fork out as much as RM80 million to terminate the joint land development agreement (JLDA).

Prasarana is a wholly-owned unit of the Ministry of Finance. The documents indicate that the ministry has given tacit approval for the company to move to the new tower being built in Dang Wangi. It currently operates out of Menara UOA in Bangsar.

Many of the findings are from the minutes of Prasarana’s board meeting on Oct 10.

“Dang Wangi is the ideal location as it is located in the Golden Triangle area of Kuala Lumpur, which has one of the best values in terms of property and also one of the best commercial addresses in Kuala Lumpur,” Tajuddin is supposed to have said, based on the documents viewed by The Edge.

The companies involved in the construction of Latitud 8 include public-listed Crest Builder Holdings Bhd and its 51% unit Intan Sekitar Sdn Bhd. The remaining 49% of the company is held by Detik Utuh Sdn Bhd.

It is unclear whether Crest Builder and Detik Utuh are aware of the plan to terminate them. Interestingly, one of Detik Utuh’s directors is Datin Sri Rahayu Tajuddin — Tajuddin’s daughter.

Crest Builder and Detik Utuh won the bid to develop the 2.72-acre or 1.09ha tract on the site of the Dang Wangi LRT station at end-March 2012. Prasarana, which owned the land on which the development was slated to take place, was to receive RM46.64 million or 21.2% of the project’s estimated GDV of RM220 million.

Since Tajuddin, who is Member of Parliament for Pasir Salak, Perak, was appointed chairman of Prasarana in May this year, it would indicate that he and his family were involved in the project even before he held the position.

According to Crest Builder’s annual report for FY2019, the Latitud 8 development had already commenced the main building works. The launch of the development was slated for end-2016, according to news reports, but it never happened.

Last year, there was talk of a change and a resubmission of plans to the local authorities. Earlier, the plan was for a single block of 43 storeys, with 17 storeys of office space and 418 SoHo units on top of the offices, as well as a retail podium, all located above the Dang Wangi LRT station.

News reports published last year say construction was halted, with the date of a relaunch of the project in 2020. However, a call to the offices of Latitud 8 finds that the launch will only take place in one or two years and that the delay is “due to market sentiment”.

The Edge was also shown a copy of a show-cause letter given to CEO Muhammad Nizam Alias, who was appointed in July this year. He had taken over from Mohamed Hazlan Mohamed Hussain, who had left after being suspended in early 2020.

Contents of the show-cause letter indicate that Muhammad Nizam showed signs of insubordination when the board and chairman instructed him to investigate MRCB George Kent Sdn Bhd, the joint-venture party tasked with constructing the LRT3.

Prasarana’s financials for FY2019 ended December are not clear. According to its filings obtained via CTOS, the company had suffered an after-tax loss of RM3.61 billion, but its revenue was not recorded.

As at end-2019, Prasarana had total assets of RM1.3 billion while its total liabilities stood at RM35.38 billion. It also had accumulated losses of RM42.41 billion.

According to its website, Prasarana owns and operates the country’s urban rail services, which include three LRT networks and the KL monorail on top of operating the mass rapid transit (MRT) line. It also owns and operates the stage bus services in Kuala Lumpur, Selangor, Penang, Perak and Pahang; provides management and engineering consultancy services locally and abroad; and undertakes commercial and transit-oriented developments within its assets, as well as key public transport infrastructure projects in the country.