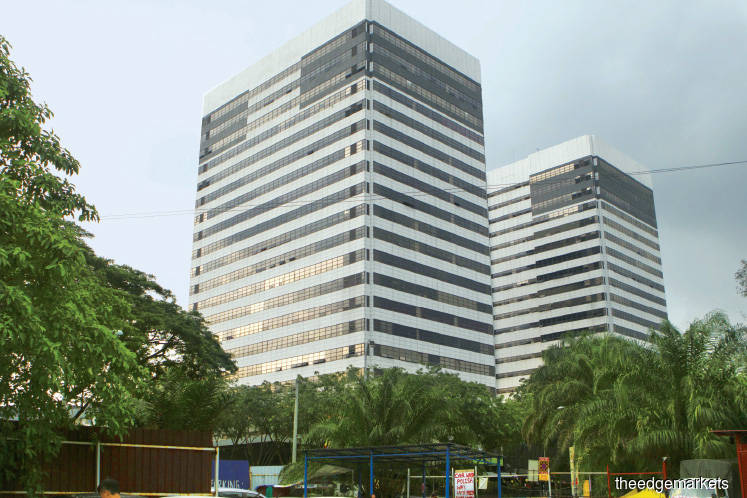 OSK Holdings Bhd has put Faber Towers in Taman Desa, Kuala Lumpur, up for sale as part of its plan to monetise some of its assets. If sold, the office-cum-retail asset may fetch as much as RM250 million, sources say.

Faber Towers, which comprises two 16-storey towers sitting atop a three-storey retail podium, belongs to Canggih Pesaka Sdn Bhd, half of which, in turn, is owned by OSK subsidiary PJ Development Holdings Bhd. The other 50% is held by Datuk Wong Nam Loong and persons linked to him. Wong is an independent non-executive director of Am ARA REIT Managers Sdn Bhd, which is the manager of AmFirst Real Estate Investment Trust.

Last week, The Edge obtained an executive summary and an information memorandum (IM) that had been sent out to potential purchasers. The documents show that the owners are selling the 31-year-old asset by way of expression of interest (EOI), which is different from a sale by tender as it is generally non-binding. Savills Malaysia has been appointed the exclusive marketing agent.

“The decision to explore the sale of this property was made together with our joint-venture partner after taking into consideration their intentions as well,” an OSK spokesperson tells The Edge when contacted to confirm the planned sale.

“For OSK Group, we are exploring the option to monetise some of our assets. If the right opportunity comes along, the sale proceeds would help strengthen our foothold in the property development business.”

The IM reveals that Faber Towers — Tower A and Tower B — is freehold with strata titles. Canggih Pesaka owns 98.3% of the building while the remaining 1.7% is privately held.

“Given the escalating land values and construction costs, this offering is a rare opportunity to secure office space in Kuala Lumpur at a near-replacement cost,” the IM says.

“Further modernisation works underway include a new, higher capacity chiller to be installed in 1Q2018 and the upgrading of all 12 lifts by 3Q2018. The lift upgrade will feature increased security via an incorporated card system to restrict unauthorised access to the office floors.” This adds to the refurbishment done in 2015.

On how much OSK hopes to fetch from the sale of the building, its spokesperson says, “We are still at an early stage of the process and we will consider our options carefully in due course.”

Nevertheless, valuers contacted by The Edge put the price tag of the building at between RM230 million and RM250 million.

The IM also describes the building as one of the earliest purpose-built skyscrapers in the capital city. The retail podium is presently geared towards servicing the needs of the middle to high-income residential catchment with its beauty and wellness, leisure and entertainment, home and lifestyle, fitness and supermarket offerings.

Some 59% of Faber Towers’ current office tenants are from the construction/building and engineering sector, including China Railway Engineering Corp and HRA Teguh Sdn Bhd. The education segment accounts for 12% of tenants with the largest being Kolej Syuen.

Faber Towers was built by Faber Group Bhd in 1986. In 2012, PJD purchased a majority stake in it and accumulated smaller units from individual strata owners.

It is worth noting that PJD, which was taken private in November 2016, had, prior to its delisting, placed three of its hotels — Swiss-Garden Beach Resort Kuantan, Pahang; Swiss-Inn Johor Bahru, Johor; and Swiss-Inn Sungai Petani,Kedah — up for sale.

PJD had said then that the sale was to streamline its hotel assets and explore the divestment of some of its existing properties. “At this moment, we don’t have any updates on the sale of the properties as we are still in the midst of initial discussions with some interested parties but nothing is firm yet,” the OSK spokesperson says when asked if the hotels had been sold.

When asked if OSK was considering the sale of any other asset, the spokesperson points out that as part of its ongoing restrategising, it will continue to review its assets carefully and be open to any good offer that comes by.

Apart from hotels and Faber Towers, OSK’s annual report lists two property investment assets — Atria Shopping Gallery in Damansara Jaya, Petaling Jaya, and Plaza OSK in Jalan Ampang, Kuala Lumpur. Atria, which recommenced operations in May 2015, has an NLA of 458,000 sq ft. As at Dec 31, 2016, the mall was 93% tenanted. Plaza OSK, which houses the group’s headquarters, closed 2016 with a 94% occupancy rate.

Meanwhile, the closing date for the Faber Towers EOI is Feb 28.