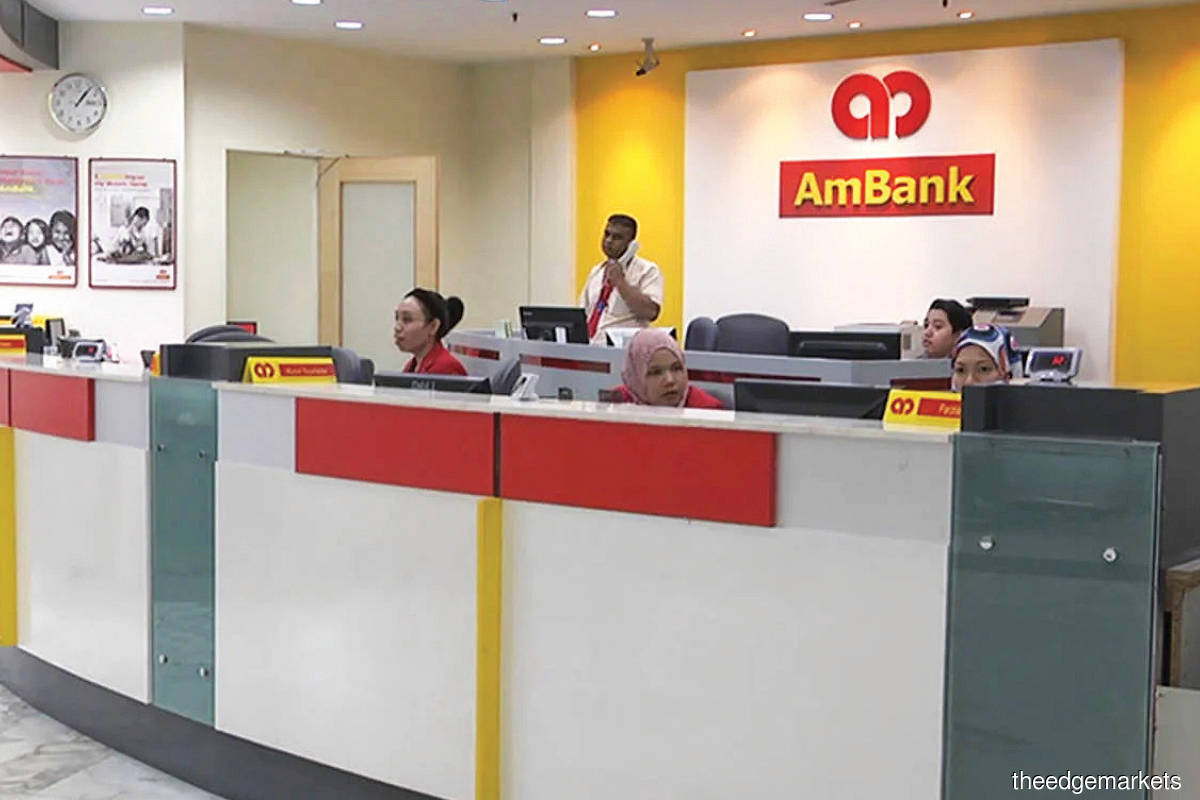 AMMB opted for a private placement instead of a rights issue as major shareholders are unlikely to invest in additional equity capital as they are either fully invested or capped in terms of any further increase in shareholdings, a spokesperson says

“Ikhlas was one of several [parties that were] approached to take up the shares. They will look at it,” a source familiar with the matter tells The Edge.

It is, however, still early days, the source adds, pointing out that the issue price for the placement shares has not even been fixed yet. Hence, it remains to be seen if any of the parties approached will actually end up as investors.

Market talk is that Ikhlas and its co-investors will take up a stake of just under 5% — anything beyond that threshold for a single investor would require Bank Negara Malaysia’s approval.

AMMB took many by surprise last Thursday evening when it announced a plan to privately place up to 300 million new shares, representing about 9.97% of its share base, to new investors that would be identified later. It does not intend for the placement shares to be taken up by existing major shareholders.

AMMB said the move to raise funds was aimed at strengthening its capital position. Its Common Equity Tier 1 (CET-1) ratio is expected to fall from 13.52% to 11.01% — the lowest of all the banking groups — as a result of the group having to pay the government RM2.83 billion as settlement for its involvement in the 1Malaysia Development Bhd debacle.

“The placement caught us by surprise, considering that the group was emphatic that a capital call would not be required in the immediate term to replenish its capital stock,” AllianceDBS Research says in a research note.

In an analyst briefing last Friday afternoon, AMMB’s management indicated that the change of heart came about following its engagement with rating agencies. Recall that RAM Rating Services Bhd last month downgraded the rating of AMMB and its key banking subsidiaries to AA3 from AA2 owing to the RM2.83 billion settlement.

“The rating downgrade by RAM Rating has pushed up funding costs by about 30 basis points, which would impact future earnings. The bank also did not want to be squeezed on pricing with regard to potential asset divestments,” an analyst who attended the virtual briefing tells The Edge.

“With the placement and potential asset disposal, the bank might see a rerating by RAM within six months, instead of 12 to 18 months,” the analyst adds.

Based on an illustrative issue price of RM2.70 for each of the placement shares, which is about a 9.77% discount to AMMB’s five-day volume weighted average price leading up to the announcement, it would raise RM810 million. The placement could shore up AMMB’s CET-1 to 11.7% from 11.01%.

It would also dilute the holdings of the two biggest shareholders — chairman Tan Sri Azman Hashim’s stake would come down to 11.8% from 13%, while that of Australia’s ANZ Group would fall to 21.7% from 23.8%.

Moody’s Investors Service too had last month cut its outlook on AMMB’s banking unit, AmBank (M) Bhd, to “negative” from “stable”. It said the outlook could be revised back to “stable” if the bank’s capital recovered to levels seen before the RM2.83 billion settlement.

What the bank says

Meanwhile, some market watchers have questioned why AMMB’s cash call comes in the form of a private placement rather than a rights issue, and whether the move is fair to minority shareholders. A rights issue would give minorities the option to participate.

“We opted for a private placement instead of a rights issue as major shareholders are unlikely to invest in additional equity capital as they are either fully invested or capped in terms of any further increase in shareholdings,” an AMMB spokesperson tells The Edge in response to queries.

“Moreover, a rights issue will require more time to complete, with no certainty of success. It may also require underwriting arrangements and does not guarantee a better outcome in terms of the amount raised,” the spokesperson adds.

On whether the issue price of the placement shares would be fixed via a book building exercise, the spokesperson says: “We are looking at options and have received many inquiries from potential investors since our announcement last [Thursday] evening. However, in adherence to disclosure requirements, we are unable to divulge details at this juncture.”

Asked if the bank had recently tried to raise RM500 million from a bond sale, the spokesperson says: “Yes, we undertook a bond-raising exercise and we undertook this soon after the settlement announcement and the RAM ratings downgrade in order to obtain a new benchmark pricing.

“To date, we have secured RM400 million, which at this juncture is more than adequate for our requirements and the increase in cost has a bearing on our future refinancing over the 18- to 24-month period when we rebuild our capital organically, and our decision to look at accelerating the capital build also took this into consideration,” the person adds.

AMMB reiterated that it has adequate capital buffers to absorb the RM2.83 billion settlement.

“A private placement is the best option available not just from a cost perspective but, more importantly, it accelerates the strengthening of our CET-1 ratio. The private placement will allow us to accelerate the process of rebuilding our capital position while providing us with additional financial resources that we can then utilise to execute our strategies better,” the spokesperson says.

“We also need to balance the fact that as much as there would be dilution in earnings per share, however, once we have improved our core equity ratio this will result in a stronger capital position, which will reduce our cost of term funding as well as provide us with a better visibility in terms of our dividend capacity,” he adds.

Analysts have voiced concern about the exercise’s earnings-dilutive effects.

“The dilution is assessed by us to be high because AMMB is trading at a low end-FY21 price-to-book value of 0.55 times, and the yield for proceeds from the private placement is low (assumed by us to be 1.94%) amid the low interest rate regime,” it said in a report. It retained a “reduce” call on AMMB, with an unchanged target price of RM2.67.

Bloomberg data shows that there are currently six “buy” calls by analysts on AMMB, with an equal number of “sell” calls, and five “holds”. The average 12-month target price was RM3.13. The stock closed at RM2.98 last Friday, down 2 sen from the previous day, giving it a market capitalisation of RM8.96 billion.

“Despite a potential knee-jerk share price reaction, we consider the proposed placement to be a lesser evil to a rights issue, allowing AMMB leeway on dividends and timing of asset divestitures. We plan to evaluate the quality of new institutional investor(s) for any value-add potential,” CLSA Research says in a research note last Friday.

AMMB had last Thursday also announced that it is assessing the carrying value of MYR2.09 billion of goodwill.

“An up to RM2.09 billion goodwill review in AMMB’s businesses suggests clean-up that may help the placement along, and is seen as further removing hurdles should AMMB seek M&A potential,” CLSA says. It maintained an “outperform” call but trimmed its target price from RM3.50 to RM3.38.

AMMB Holdings Bhd is understood to be looking into conducting an internal investigation on what went wrong at the banking group in previous years that ultimately led to its RM2.83 billion settlement with the Malaysian government.

The move comes amid growing pressure from some of its stakeholders, particularly institutional shareholders, to conduct such an investigation.

“With reference to any internal investigations pertaining to this matter, we are reviewing our options from a legal perspective,” an AMMB spokesperson tells The Edge when asked about the matter.

AMMB’s management has been busy engaging with stakeholders in recent weeks following its announcement on Feb 26 that it would pay a whopping RM2.83 billion to the Ministry of Finance as a global settlement for the group’s involvement in historical transactions involving 1Malaysia Development Bhd and related entities.

“We told them that they have to be serious about wanting to do the investigation. The investigation must be comprehensive and should be done without fear or favour, and no stone should be left unturned,” Lya Rahman, adviser/council member of the Institutional Investors Council Malaysia (IIC), tells The Edge.

She says efforts should also be made to recover the losses incurred by the bank owing to the global settlement.

The IIC has some 24 members, which include the country’s top asset managers such as the Employees Provident Fund, Permodalan Nasional Bhd, Lembaga Tabung Haji, Khazanah Nasional Bhd and Kumpulan Wang Persaraan (Diperbadankan).

In an interview with The Edge last month, group CEO Datuk Sulaiman Mohd Tahir said as part of the settlement agreement with the government, AMMB reserves the right to go after the individuals or parties that were responsible. “But it will have to go through due process. And that is something that we will certainly consider,” he said.