Newsbreak: KL-Singapore HSR may cost as much as RM68 bil 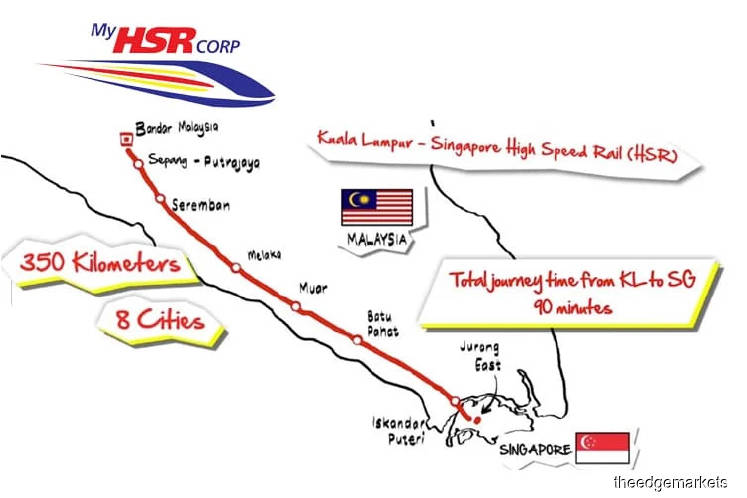 BITS and pieces of information on the proposed 335km Kuala Lumpur-Singapore High Speed Rail (HSR) project have started to trickle out. For starters, it may cost as much as RM68 billion and the Japanese are likely to play a key role in the giant infrastructure project, sources familiar with the matter tell The Edge.

Although Japanese participation seems certain, the precise nature of their role remains unclear, as some sources say they may be involved in only the technical aspects while Malaysia funds the project. Others contend that the Japanese may be involved in both the funding and provision of technical expertise.

“From what I hear, the Cabinet met and discussed [the construction of the HSR] already, with both Tok Pa and Azmin heading the discussions … The cost of the HSR was pegged at RM68 billion,” says a source, referring to Datuk Sri Mustapa Mohamed, Minister in the Prime Minister’s Department for Economic Affairs, and Datuk Sri Mohamed Azmin Ali, who was Economic Affairs minister until March, respectively.

The source says the Japanese are also in talks to provide funding, but declined to disclose when the Cabinet discussion took place or a general breakdown of costs. Considering Mustapa was appointed to his current position on March 10, the discussion could not have been too long ago.

Both firms were appointed in July 2019, and are understood to have completed their studies and handed over their findings to Minister of Finance Inc’s wholly-owned MyHSR Corp Sdn Bhd, the project delivery vehicle and implementer of the project.

Another source maintains that the Malaysian government will provide the funding, and the Japanese, the technical expertise.

“From what I was made to understand, the cost is RM68 billion, but the Japanese are providing only technical expertise; our government is funding it,” he says.

An analyst from a local bank-backed brokerage raised hybrid financing as a possibility, with Putrajaya opting for part-financing from the Japanese and Danainfra Nasional Bhd, a special-purpose vehicle wholly-owned by the Ministry of Finance, which would issue debt papers for the infrastructure project.

“But the climate has to be right for us to raise bonds. Now is not a good time, as oil prices are not strong, and we are dependent on oil prices for revenue,” he says.

The analyst adds that the RM68 billion cost could be for the entire HSR project and estimates the construction portion at RM30 billion to RM40 billion.

Who will helm MyHSR Corp?

MyHSR Corp has been leaderless for some time. The Edge understands that the government is close to appointing a CEO for the unit.

It is unclear when its former CEO Datuk Mohd Nur Ismal Mohamed Kamal left the company, but there is talk that he may make a comeback.

Another name in the running is Mohd Azharuddin Mat Sah, chief transformation officer of Malaysia Airlines, former CEO of the Land Public Transport Commission (SPAD) and director of urban public transport for Greater Kuala Lumpur/Klang Valley at the Performance Management and Delivery Unit (Pemandu) in the Prime Minister’s Department.

Whoever is appointed will have his work cut out for him, given the controversial background of the HSR and hefty cost at a time when Malaysia’s coffers are running on near-empty.

In July 2018, the entire cost of the HSR project — including so-called hidden costs — was pegged at an estimated RM100 billion by the Pakatan Harapan government, even though the Barisan Nasional government, which had just ceded power two months earlier, had estimated it could be completed for RM72 billion.

In any event, it is understood that Putrajaya has decided to do away with the project delivery partner (PDP) structure this time around.

The previous KL-Singapore HSR model mooted under Barisan Nasional had three components: an operating company, the PDP and an asset holding company.

In November 2017, a consortium comprising Malaysian Resources Corp Bhd and Gamuda Bhd was awarded the PDP contract for the northern section spanning about 135km from the Bandar Malaysia station to the southern Melaka station.

The southern portion of about 200km, from Melaka through Johor bordering Singapore, was given to the Syarikat Pembenaan Yeoh Tiong Lay Sdn Bhd-TH Properties Sdn Bhd consortium. The former is the parent company of YTL Corp Bhd, and the latter is wholly-owned by pilgrim fund, Lembaga Tabung Haji.

“This time around, the Ministry of Works is likely to play a more important role, with the PDP format scrapped,” the first source says.

The initial plan was for eight stations: Bandar Malaysia, Sepang-Putrajaya, Seremban, Melaka, Muar, Batu Pahat and Iskandar Puteri in Malaysia, and Jurong East in Singapore. Operations were targeted to commence by end-December 2026.

It was envisioned that there would be more than 60 civil works packages and more than 5,000 sub-contract packages.