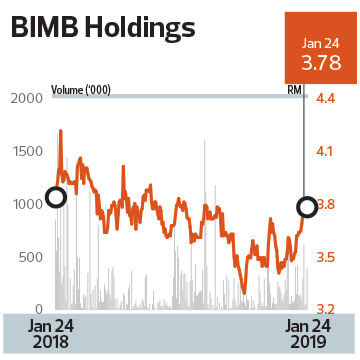 THIS is poised to be an interesting year for BIMB Holdings Bhd, as a long-talked-about reorganisation of the group’s structure is likely to take place in the second half of this year, a move that could provide a fillip to its shares.

It is learnt that BIMB, controlled by Lembaga Tabung Haji (TH), is seriously considering undertaking a private placement of new shares in the second half to raise over RM600 million to repay a shareholder debt of some RM800 million ahead of the restructuring.

According to sources, BIMB had recently approached its major shareholders — namely TH (53.47%), the Employees Provident Fund (12.75%), Permodalan Nasional Bhd (about 10%) and Kumpulan Wang Persaraan (Diperbadankan), or KWAP (about 2%) — to gauge their interest in acquiring the new shares.

Industry observers believe the major shareholders, except TH, would likely want to take up the new shares given BIMB’s better-than-industry financial performance and decent dividends in recent years.

TH is in the process of cleaning up its balance sheet after financial shenanigans were recently uncovered and so, logically, it may not be keen to acquire its portion of the new shares, observers say. If so, this would dilute its shareholding in BIMB, but improve the counter’s public float and liquidity as the shares would likely be offered to the other major shareholders.

TH CEO Datuk Seri Zukri Samat had told reporters two weeks ago that the pilgrim fund will lower its risk appetite by trimming its exposure to equities in favour of fixed income.

“If they decide not to take the new shares, it will be good for public float and liquidity,” remarks an analyst.

Analysts like the idea of BIMB settling its shareholder debt through a private placement of new shares. Last year, speculation was rife that BIMB would undertake a rights issue to pay off the debt, and concerns about the exercise’s dilutive impact weighed on the stock’s performance. BIMB was, in fact, by far the worst-performing financial institution (FI) on Bursa Malaysia last year, falling 19.1%. Interestingly, BIMB is currently the only FI that analysts unanimously have a “buy” call on.

Bloomberg data shows that the highest target price of the nine analysts who track the stock is RM5.40, while the lowest is RM4.40, with the average at RM4.89. The stock closed at RM3.78 last Thursday.

The shareholder debt refers to 10-year sukuk murabahah that BIMB issued to TH in December 2013. Recall that the debt paper was issued, along with rights and warrants, to fund BIMB’s purchase of the remaining 49% stake in Bank Islam Malaysia Bhd that was held by Dubai Financial Group (30.5%) and TH (18.5%) for RM2.86 billion.

BIMB must address the shareholder debt before it can undertake a restructuring that will see it collapse its financial holding structure. As it stands, BIMB is a financial holding company that owns 100% of Bank Islam and 59% of Syarikat Takaful Malaysia Keluarga Bhd (STMK).

Bank Islam, which accounts for 80% of  BIMB’s earnings, is likely to take over the latters’s listed status in the restructuring. It is learnt that the restructuring will be effected through a share swap between BIMB and Bank Islam.

AmInvestment Bank Research, in a Jan 22 report, says, assuming BIMB does a private placement to raise up to RM630 million and if it offered a 10% discount on the new shares, the group’s share capital base could widen to 1.88 billion from 1.69 billion.

It goes on to say that the restructuring could see BIMB’s securities business parked under Bank Islam.

“Based on our preliminary assessment [of this possible scenario], the current shareholders of BIMB will not be worse off by these changes that could be taking place in 2H2019,” it says.

Should the private placement exercise take place, it would unlock the value of Bank Islam, it adds.

BIMB is currently trading at 1.1 times the price-to-book value, which suggests that the market is undervaluing Bank Islam, which had an annualised return on equity of 12% as at the nine months of FY2018.