Newsbreak: Abu Sahid moves in on PLUS 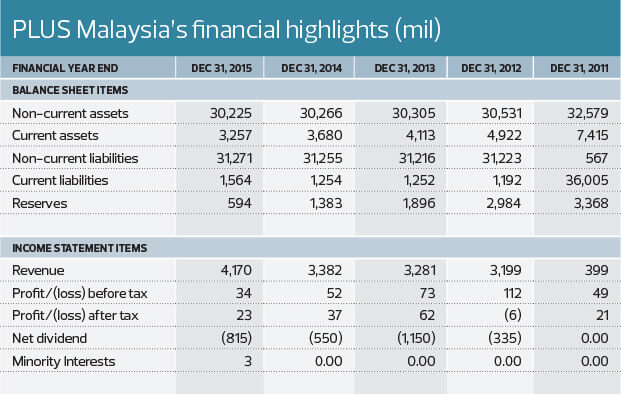 While negotiations have yet to commence, Abu Sahid has received the blessing of the highest levels in the country, and has already made overtures to meet Tan Sri Azman Mokhtar, managing director of Khazanah, to discuss a possible acquisition from the state-controlled investment arm.

In an exclusive interview with The Edge, Abu Sahid says he is also looking to buy out the Employees Provident Fund’s (EPF) 49% stake in PLUS Malaysia.

To recap, the UEM Group and the EPF took over the assets and liabilities of PLUS Expressways in 2011 in a RM23 billion deal.

If Abu Sahid’s plan pans out, it could lead to the largest corporate exercise in Malaysia to date.

Nevertheless, details are scarce as he is keeping his cards close to his chest.

When asked how confident he is of pulling off the acquisition, which may cost RM30 billion or more, Abu Sahid says, “I’m very, very confident of pulling it off. I have everything ready — I have the money, I have the blessing from the highest levels in the country, I have the advisers and bankers all ready, and I have the formula to do it.”

For a few months now, there has been speculation that Abu Sahid wants to take over PLUS.

Prior to that, there was market talk of UEM Group looking to take over Maju Expressway Sdn Bhd, which operates the Maju Expressway (MEX) that links Kuala Lumpur city centre with the Kuala Lumpur International Airport in Sepang. A 16.8km extension to KLIA will further increase the value of MEX. The extension, known as MEX 2, is slated to cost RM1.7 billion to construct — with the engineering, procurement and construction sum of RM1.29 billion fixed under the contract.

Maju Holdings is funding the highway extension via a RM1.3 billion sukuk murabahah programme and RM150 million junior bonds issuance, rated by Malaysian Rating Corp Bhd at AA-IS and A- respectively, with the outlook on the ratings stable.

Abu Sahid confirms the negotiations to sell Maju Expressway but says he would never sell his highway for anything less than RM3 billion.

Thus, negotiations could have fallen through due to a low offer by UEM Group and Khazanah, or Abu Sahid wanting too much.

Maju Expressway registered an after-tax profit of RM7.62 million on the back of RM105.57 million in revenue for its financial year ended Dec 31, 2015. As at end-Dec 31, 2015, it had non-current assets of RM1.45 billion and current assets of RM182.77 million. Meanwhile, its non-current liabilities were RM1.35 billion and short-term debt commitments, RM228.66 million. It also had accumulated losses of RM9.86 million.

The company has a 33-year concession, which started in December 2004, and traffic is likely to improve when MEX 2 begins operation.

The extension will connect Putrajaya with KLIA. It is likely to be a game changer. With a 33-year concession, MEX 2 is slated to commence operations in late 2018 or early 2019.

He says, “I cannot comment as I have yet to even commence talks.”

PLUS Malaysia’s parent UEM Group declined to comment to an email query by The Edge.

It would only say, “Our apologies, but UEM Group does not comment on reports that are speculative in nature.”

PLUS Malaysia has five concessions:

All of PLUS Malaysia’s concessions end in December 2038.

To his credit, Abu Sahid’s 26km MEX is well maintained and well run. Even some portions of the highway, which were not required to be lighted up, are lit.

Comparing MEX to PLUS Malaysia, Abu Sahid says, “At MEX, my opex (operating expenditure) is less than 13% … that’s how well run it is.”

A check on the Companies Commission of Malaysia reveals that for its financial year ended Dec 31, 2015, PLUS Malaysia registered an after tax profit of RM23.12 million from RM4.17 billion in revenue. It paid a dividend of RM815 million to its parent in FY2015.

Interestingly, over the past five years, PLUS Malaysia has paid some RM2.85 billion in dividends to shareholders.

Abu Sahid’s offer is the second in recent years.

To recap, in March 2014, Tan Sri Halim Saad of Renong Bhd fame had put in an unsolicited bid to take over PLUS Malaysia via his private investment vehicle, Idaman Saga Sdn Bhd, but the offer was rejected by the government.

“Do you think he (Abu Sahid) can pull it off? His track record is questionable. What happened at Perwaja [Holdings Bhd]? Is he biting off more than he can chew?” a market watcher asks.

While Abu Sahid has done well with MEX and other assets, such as the bus terminal in Bandar Tasik Selatan, his involvement in steel company Perwaja and his sudden departure have remained a mystery.

What happened at Perwaja

At end-May, Bursa Malaysia dismissed Perwaja’s appeal for an extension of up to July 31 this year to submit a regularisation plan. The company was delisted on May 30, a sad ending for a huge project that had the support of the government.

To put things in perspective, Perwaja, for its nine months ended June 2017, suffered a net loss of RM181.33 million from RM296,000 in revenue. It has been 19 quarters since Perwaja announced a profit.

Abu Sahid stepped down as chairman of Perwaja in July 2013, after a series of disagreements with Tan Sri Pheng Yin Huah of Kinsteel Bhd.

Quek controls Southern Steel Bhd and has a banking group, Hong Leong, while Cheng has several iron and steel outfits under his flagship Lion Group.

Abu Sahid says he remembers former banker Tan Sri Lin See Yan telling him, “Quek’s money or William’s money or Pheng’s money — it all smells the same”, and he had urged Abu Sahid to go with Quek, saying that the latter had deep pockets as he had a banking group as well.

“I chose Pheng as the other two were too large and would have swallowed me. I would not have been able to give my views to them. Pheng and Kinsteel were quite small and I also liked it that Pheng had sons who were involved in the business, which meant succession planning was taken care of … but, unfortunately, we couldn’t work together. When I tried to advise him, he said that I didn’t know about business, but the fact of the matter was, I had been running Perwaja successfully for many years,” Abu Sahid explains.

Pheng’s Kinsteel was the largest shareholder of Perwaja with 37% equity interest while Maju Holdings still has about a 30% stake in Perwaja. Maju Holdings also has close to a 16% stake in Kinsteel.

But Pheng has been selling his shares in Perwaja, reducing his holding to 29%. Abu Sahid has maintained his interest in Perwaja, taking a huge hit in the process.

As a matter of fact, many did not believe that Abu Sahid had managed to turn things around at Perwaja, with some claiming that the accounts were inaccurate.

“That’s why I listed the company’s shares. [Former premier] Tun Mahathir [Mohamad] told me that some people did not believe that Perwaja had turned around, and that I manipulated the accounts … our auditors were KPMG.

Abu Sahid was selected to run Perwaja as he knew the company well, having supplied scrap metal to it for years and having been involved in the acquisition of machinery for the company, as he was familiar with the European dealers.

“I helped Perwaja buy the [required] machines. When Mahathir found out, he ordered me to take over Perwaja,” he explains.

When asked why he has not sold a single share, Abu Sahid says he had promised the government he would not sell.

“I wrote off, lost more than RM700 million,” he says, adding that Perwaja would have been all right if he was still running it, and not the strategic partner as instructed by the government.