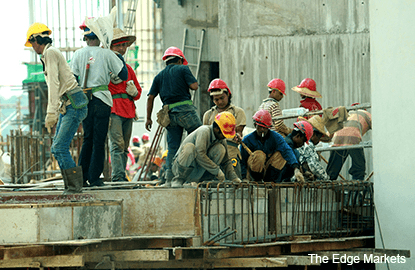 PUTRAJAYA (March 18): The new levy rates for foreign workers have been revised and are effective today for Peninsular Malaysia only, according to Bernama.

Quoting Home Ministry secretary-general Datuk Seri Alwi Ibrahim from a statement, the news agency reported that the new rate is RM1,850 for the manufacturing, construction and services sectors (category 1), and RM640 for the plantations and agriculture sectors (category 2).

The new rates translate to an increase of RM600 for the sectors in category 1 and RM230 and RM50 for the plantations and agriculture sectors respectively, said Alwi.

"The difference in rate increase is reflective of the income or incentives offered to workers in the particular sectors," he said.

It was previously announced that the new rates for categories 1 and 2 were to be RM2,500 and RM1,500, respectively. Due to complaints from industry stakeholders, particularly those that are labour intensive, the hike was postponed.

At a meeting on Feb 16, major associations representing industry informed the ministry that the increase in rates was too drastic and could stunt business momentum in view of global economic uncertainties, said Alwi.

Alwi said the ministry was confident that the latest rates were still competitive and commensurate with the facilities and infrastructure provided by the government, which the foreign workers also enjoy.

"The government is of the opinion that these are the optimum rates for now to ensure economic growth is not affected and the objective of the government to reduce dependence on foreign labour by labour intensive industries is met.

"Industries are encouraged to take more proactive steps to switch to automation or mechanisation," he said.

Alwi added that the freeze on new foreign workers' intake would be maintained for an indefinite period and the government would focus on its rehiring programme to legitimise illegal foreign workers.