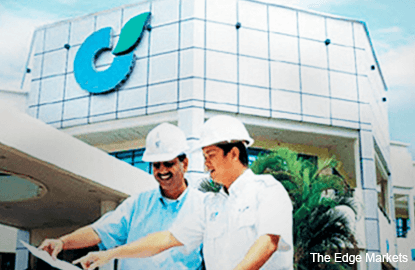 Gas Malaysia Bhd
(Sept 8, RM2.06)
Maintain buy with an unchanged target price (TP) of RM2.87: Taking cue from the Energy Commission’s (Suruhanjaya Tenaga) aim to employ a global mechanism that is based on performance, Gas Malaysia Bhd will most likely adopt the incentive-based regulation (IBR) regime in January 2016.

Under this new regime, we believe that there will be more earnings clarity moving forward as the average gas distribution margin would be around RM1.58 per one million British thermal units (mmBtu).

Since the IBR is based on a return-on asset mechanism, Gas Malaysia will be assisted in achieving a certain amount of revenue based on the value of its regulated assets, operating expenditure (opex) (inclusive of gas cost), depreciation and tax incurred for the period. Hence, since its asset base and opex will naturally grow in time, it is safe to assume that Gas Malaysia’s revenue will also grow in tandem.

Apart from the regulated business (gas transportation), Gas Malaysia has other non-regulated business that would contribute in a more significant manner starting in the financial year ending Dec 31, 2016 (FY16).

Despite having a dividend policy of 75%, Gas Malaysia has been distributing 100% of its net profits in dividends for the past three years. We are of the opinion that the company would continue to distribute all of its earnings, at least in FY15. Its first interim dividend declared for FY15 is 3.5 sen per share.

Gas Malaysia currently has about 2,065km of pipeline in Peninsular Malaysia. In the next four years, the company plans to increase the pipelines by an additional 730km (northern region 190km, central region 250km, southern region 270km and eastern region 20km).

As such, approximately RM700 million to RM800 million (2014 to 2019) has been allocated for these expansion plans. From FY14 to six months of FY15 (6MFY15), Gas Malaysia has only spent around RM141.5 million. Moving forward for the next couple of years, we are expecting capital expenditure to increase.

The government will conduct a semi-annual tariff review — the next being in January 2016 and the following in July 2016. In the last review in July this year, the tariff was increased from RM19.77 per mmBtu to RM21.80 per mmBtu. According to the IBR regime, the theoretical aggregate revenue requirement will naturally increase as the regulated asset base increases in time along with depreciation and also operating costs.

As such, we are expecting and anticipating further tariff hike in future reviews. We are reiterating our “buy” recommendation on Gas Malaysia with an unchanged TP of RM2.87 per share. Our TP is based on the Gordon Growth Model with a risk-free rate assumption of 3.9%, a market-risk premium of 6.1%, a beta of 0.6 times and a terminal growth rate of 4%. — MIDF Research, Sept 8 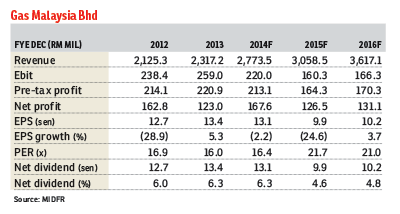