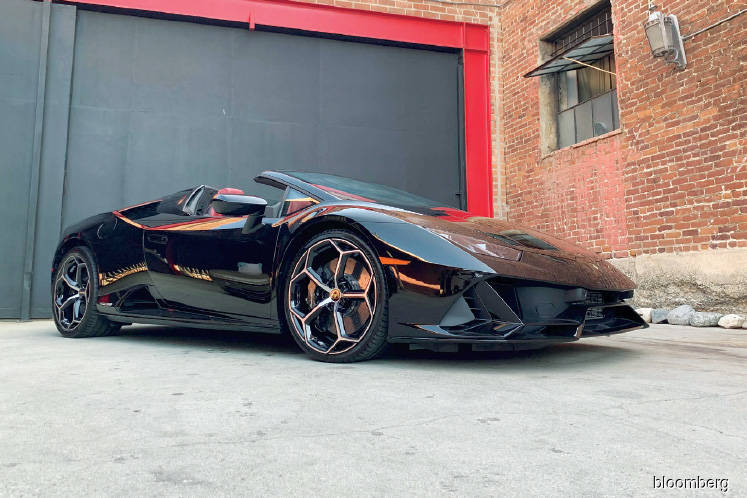 The Lamborghini Huracan Evo Spyder starts at US$287,400, but options and upgrades including, most notably, the special US$14,000 paint job, sent this one to US$339,845. Photos by Bloomberg

It is the first thing Stefano Domenicali notes as we meet on a hidden back patio in the late-afternoon sun. At 54, the Bolognese chief executive officer is cheery and relaxed, wearing an open-collar shirt and stylish trainers — unusually casual attire for a car executive, even in California. He is chill.

I had just thanked him for the press loan of the 2020 Lamborghini Huracan Evo Spyder that I had driven up from Los Angeles to Carmel, California the day prior — and had mentioned what an extravagant necessity it was that one of Lamborghini’s public relations specialists flew my luggage up to Carmel himself, since two rolling carry-on cases and my various assorted hats would not fit in the cubby situated at the front of the car where otherwise sane people would expect a trunk. It looked like something from Honey, I Shrunk the Kids.

“We will fly the customer’s bags too! It’s one of our services,” Domenicali quickly notes. The programme, available to those clients willing to pay, sees Lamborghini staff transport luggage between destinations worldwide. “That is an easy option to do for using the car on long road trips.”

Of course! Silly me. It all sounded so simple, presented so easily and happily that the answer belied just how extraordinary both the service and the car attached to it really are. It is a US$287,400 (RM1.21 million) sports car, but it is also chill.

The Lamborghini Huracan Evo Spyder is the mid-cycle refresh of the Huracan Spyder line; the one I drove featured addendums like ambient light packages, smartphone interfaces, electric seats, and “Lamborghini telemetry” for enhanced driving that pushed the final sum of the one I drove to US$339,845. Though it looks barely different from its predecessors, with subtly adjusted front facia, it possesses significant new technology both under the hood and inside the cabin. The advancements smooth the human-car interface, but the driving experience is still so dialled-in and raw that it is impossible to exit the car anything but giddy.

Brutalism at its finest

Compared to Lamborghini’s technical mastermind Maurizio Reggiani, who has been with the brand since 1998, Domenicali, who made his name as the boss of Ferrari’s Formula One team from 2008 to 2014, is a relative newcomer.

That may be why he is so comfortable softening Lamborghini’s polarising stances on everything from electrification to making a sports utility vehicle (SUV). (The Urus SUV, launched in 2018, comprises a third of the company’s bottom line; Lamborghini sold 5,750 vehicles last year worldwide, up 51% from 2017.)

But Domenicali does not want his cars to go down easy. When we talked about the challenges of driving the Huracan Evo Spyder, which I tested with the top down on desolate desert highways earlier this month in 116°F (46.67°C) heat, he proudly maintained the company line: “Lamborghini is brutal.”

Domenicali said that with a confident smile. “Take it or leave it.”

Yes, the air conditioning does work in 116°F heat, though with the top down it is ... mitigated. Anyway, here are a few of the brutalities: A trunk so small it might as well be a lunchbox; barely adjustable, hard seats better suited for perching than for sitting; B pillars that blocked half of my rear visibility; a front splitter so low that navigating even speed bumps required the push-button lift function and some delicate steering; and a windshield top that was eye-level with me, a tall woman. As I sat at stop lights, it blocked my view of an anticipated green.

Suffice to say, with these inconveniences bobbing around my brain like houseflies, the handful of highway patrolmen I passed who may have been eager to ticket a blonde in a Lamborghini were the least of my worries.

But Domenicali has reason to feel so secure.

And the discomforts of the road evaporated like water on August asphalt compared to the thrill of driving the car. The Huracan Evo Spyder shines as a rock-solid, road-eager sports car that gives as good as it gets. It does zero to 60mph (96.56kph) in a 2.4-second cacophony of burning rubber. Its top speed is 202mph, a delightful figure unattainable to even the most powerful, most expensive production supercars just 10 years ago. And although it has the same V10 engine and seven-speed automatic/paddle shifting transmission as its precursors, the Huracan Evo Spyder offers even more whiplash with 29 more horsepower (631 horsepower in total) and alley-cat-nimble rear-wheel steering.

All the systems controlling the driving dynamics have been updated too. These might be less perceptible at first, but it would not take long until you are going to be willing to pay the additional thousands required to properly feel it.

Most notably, the car uses computer “logic” to sharpen or soften the response of the steering, the brakes and the chassis, according to the style of the driver. The system, which is named with a jumble of long Italian words best shortened to LDVI, makes 50 adjustments per second based on 240 different inputs like how the car rolls, pitches, accelerates, steers and brakes under any given driver. The whole thing anticipates desires based on habits and adjusts gradually in minutes. (Can I get an assistant like that?)

For me on my drive in California, that meant the Huracan Evo Spyder was slightly more ironed out and simultaneously crispier to drive than its predecessors. It packed a one-two technological punch that made it feel like being inside a whole new car, not just a perfunctory update, on that road to Carmel.

The second punch was its new internal interface.

Here, Lamborghini has switched out the old infotainment system developed by Audi in favour of an all-new Lamborghini-exclusive unit that has integrated the car with the driver (and, by extension, the driver’s cell phone) as much as any sports car in the modern era without actually offering autonomous driving. (The module was inspired by the infotainment system in the US$1.9 million Lamborghini Centenario, with totally new hardware and software for the Evo.) It encompasses every aspect of the car from the inside out.

The focal point is the 8.4-inch (21.34cm) tablet-like screen in the centre console, tilted at just the right angle to prevent glare and preserve ease of use from the arm level. It sits under the welcome and familiar cockpit style line of buttons that frame the top of the centre console and which control the windows and lift function, among other things. But it offers many new features in the car to enhance seamless connectivity between the human and the machine. A single tap of the finger controls driving dynamics, entertainment, traffic and cockpit lights; two fingers dragged across the screen adjust speaker volume. A new telemetry system with two new cameras help finesse parking skills.

Paired with the hand-stitching of the leather seats and careful attention to those hexagon details throughout the cabin, the new technology felt like an invigorating counterbalance to old-world craftsmanship. Rather than diluting the essence of old Lamborghini, the new technology has enhanced it.

So, is this a Lamborghini that drives for you? Not quite. But it does something infinitely better — it makes you feel like a better driver. And compared to interchangeable appliances from the hordes of premium luxury brands, the Huracan Evo Spyder feels more extreme than ever — and that is as it should be. — Bloomberg