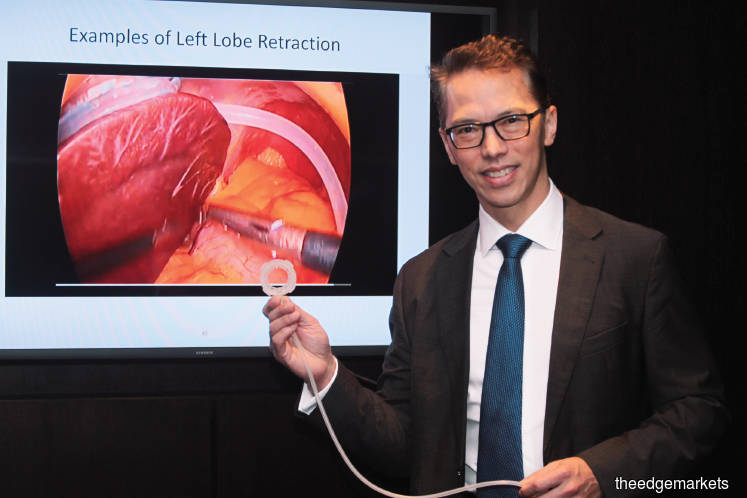 I thought if the liver could be held up with surface tension, why not do it with suction? I turned to my wife and said, ‘We have to talk.’ > Gan

Dr Philip Gan, a Malaysian-born surgeon based in Australia, is on a mission to make surgery less painful and invasive. Over the years, he has observed how certain procedures are traumatic for patients and wanted to do something to change this.

His area of focus is the minimally invasive laparoscopy, also known as keyhole surgery. It is a surgical procedure that allows the surgeon to access the insides of the abdomen and pelvis without having to make large incisions. Doctors simply insert the laparoscope — a small tube with a light source and camera — and small surgical tools called ports into small cuts in the skin to perform surgeries. It is most commonly used in the areas of urology, gastroenterology and gynaecology.

“A lot of colorectal, bariatric and gastric surgeries are now being done through laparoscopic surgery. It used to require big cuts to the body. But with keyhole surgery, the recovery and scarring are different. I think this is part of the journey to make surgery less traumatic for patients,” says Gan.

But to access the insides of the abdomen or pelvis, doctors often have to use a metal retractor to lift the liver or other organs so they do not get in the way. Fixing the metal retractor requires an additional cut apart from the incisions made to insert the laparoscope and dissecting instruments. For gallbladder and stomach surgeries, the retractor — and in some cases, another port — is used to lift the liver. However, the retractor can cause injury to the liver as the impact can potentially interfere with the blood supply to parts of the liver.

“The first laparoscopic gallbladder surgery in Australia took place on March 15, 1990. It required four laparoscopic port incisions. And 29 years later, that is how the majority of surgeons are doing it,” says Gan.

This is where he saw the opportunity to innovate and improve the process of gallbladder and stomach surgeries. The idea for his solution came in 2009, when he was performing a surgery with the assistance of his wife, also a doctor.

“I thought if the liver could be held up with surface tension, why not do it with suction? I turned to my wife and said, ‘We have to talk.’ She looked at me with a nervous expression. When we got home, I explained the idea to her,” says Gan.

Just like that, he had come up with the idea for the LiVac retractor, which uses suction to hold up the liver without the need for an additional incision. A year later, he set up LiVac Pty Ltd even as he continued to work as a consultant general surgeon at the St John of God Warrnambool Hospital and South West Healthcare in Australia.

“In my personal practice, I used to do gallbladder surgery with four incisions. Now, I do it with three and I use mini-laparoscopy with really tiny incisions,” says Gan.

“I find that there is a huge demand for this kind of surgery. In the area where I live, my private practice is eight times bigger than the next surgeon’s because I can offer a different solution. From the patients’ perspective, they are getting a less invasive operation and faster recovery.”

Moving on to robotic surgeries

In fact, Gan’s invention is on top of a global trend by medical professionals to make surgery less traumatic for patients. Other doctors and medical device companies have explored various approaches to solve the problem he identified. Robotic surgery, in particular, is a solution that has attracted much attention and investment.

“da Vinci, the biggest robotic company in the world, has come out with instruments such as the da Vinci Single Port, which only requires a single incision. Although the incision is a little bigger than normal, multiple robotic arms emerge from the robot to perform the surgery. It may not find broad utility in every operation, but it is a start. It shows you that big companies have begun investing in less invasive technology,” says Gan.

Another US-based company, TransEnterix, is making robotic arms with 3mm ports, he adds. “It is investing hundreds of millions of dollars to invent less-invasive robots because it sees that this is the future. Robotic surgery is going down that path and I think it will also incorporate artificial intelligence in 10 or 20 years. On the technology side, this will move ahead very quickly.”

The LiVac retractor can be used as part of robotics surgery because it does not require a person or external frame to hold it in place, as is needed with a metal retractor, which has to be attached to an external frame connected to the operating table and may clash with the robotic arms moving around the table.

“If they clash, it may push the metal retractor in an unexpected direction and cause injury. Most of the retractors in the market now require a separate skin incision and either a bracket or frame to attach it to the table, or someone has to hold it,” says Gan.

But robotic surgeries are currently not less invasive than laparoscopy, he observes. It is also more expensive and time consuming. “It is more comfortable for the surgeon as he gets to sit down at a console and has a 3D image to work with. So, he is less tired after a long operation. The instruments are more dextrous so surgeons can do a bit more with them. With the way things are going, robotic surgery is becoming less invasive, as what we see now is just one point in the journey.”

Meanwhile, laparoscopy is seeing major interest from surgeons around the world. Gan, who has attended various industry events, observes that many surgeons in Asia — including in Malaysia — are actually involved in cutting-edge minimally invasive surgeries such as reduced-port or single-port surgeries.

“We just received an email from Taiwanese surgeons who described what they are currently doing and I was blown away. The surgery that is being done in Asia is not being done in the West. I think there is strong interest in advanced and less invasive surgery techniques in Asia,” he says.

The Asian aversion to scarring and emphasis on cosmetic beauty could be another driving factor, says Gan. “I think Asians are a bit scared of surgery because they are concerned about scarring. Asian skin sometimes does not scar as well as Caucasian skin. So, if you can do surgery with less scarring, there is interest.”

“These are really tiny. You do not even need to stitch the skin. And a week later, you can hardly see the mark. That is already available. But probably a minority of surgeons do it because it is arguably more difficult, although I think the results are better,” says Gan.

Business lessons for a surgeon

It took a lot of hard work for Gan to commercialise his invention. As a trained surgeon, he was never really exposed to lessons on medical device innovation. He had to learn from scratch things such as applying for intellectual property protection, raising capital, medical device engineering, clinical trials, regulatory and quality compliance and market entry.

“When I first had this idea, we approached big companies. They always have a web portal that allows you to submit ideas. I think they go into a big black hole that disappears,” says Gan.

“Big companies want to see de-risked technologies. It takes investment to prove that an idea will work commercially and prove it clinically. I don’t think it is that easy.”

He had to work with patent attorneys and experts to help him with the process. This included hiring Dr Anabela Correia, a commercialisation consultant, as the CEO of the company.

First, they raised funds from family, friends and angel investor groups. In 2013, Gan won a federal government grant of A$250,000 to develop his product. He and his wife also put in A$330,000 of their own money into the company.

“To succeed, I think you need to believe in the product and have

determination, resilience and support. I had support from my team, especially from our CEO and my wife. I could not have done it without the support of my wife. She assists me with a lot of my private operations so she could see the same issues that I was seeing,” says Gan.

The LiVac retractor has since been used and tested by early-adopter surgeons in Australia, Germany and Italy, who have given him positive feedback on the product. So far, Gan has been granted patents in the US, Europe, South Korea, Japan, China, Australia and New Zealand.

He is preparing to enter the US market this year, following the successful application for a US Food and Drug Administration licence. He is also planning to expand to Asia as he has received many inquiries about the product from surgeons in the region, with advanced orders already placed by a distributor from one territory. LiVac is currently raising its Series B funding to make all these activities happen.

“Asia was initially not on our radar screen as we were thinking of expanding first in Australia, then to Europe and the US. But companies from Asia have consistently approached us about our product,” says Gan.

He is in the early stages of development for another product called the LiVac Sling, which can be applied to more surgeries in the laparoscopic field, including colorectal, urology and gynaecology operations. For instance, it can be used to lift the intestines or uterus out of the pelvis for rectal cancer surgery.

“It is a much simpler device than the LiVac. It is a silicon band with multiple holes and two hooks. You can adjust the distance between the hooks,” says Gan.

The new product has been registered in Australia and used by a professor in Germany and a surgeon in the US. The feedback has been positive. “It is also cheaper to make because it is simpler. This means we can actually find access to markets that are more price sensitive,” he says.

Going forward, Gan plans to continue wearing both his surgeon and inventor hats. He already has several other ideas. All this work is motivated by his desire to perform laparoscopic surgery with as few incisions as possible.

“I am first and foremost a surgeon, so I do not plan to retire

anytime soon. I am the director of surgery at the hospital I work at. From a commercial standpoint, my vision is to see LiVac get into all the major markets and to have am R&D budget so we can develop our pipeline of products. I think there is a path for growth and further improvements to our existing devices. We are very open to feedback from surgeons who tell us how to modify them,” says Gan.