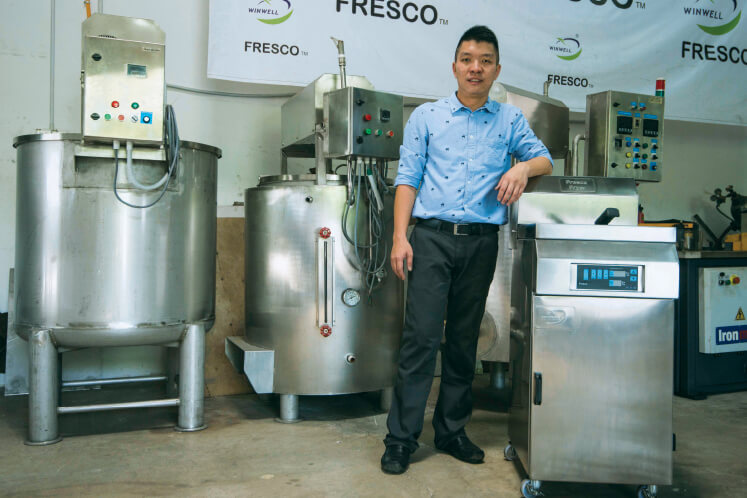 When people talk about the hazards of eating out, especially fried food, they are usually referring to the dirty or recycled oil that some cooks use. Engineer Sean Tam decided that there had to be a better way for him to enjoy his favourite fried food.

So, armed with nothing but a concept, the Penangite went to Kuala Lumpur to meet with PlaTCOM Ventures Sdn Bhd, Malaysia’s national technology commercialisation platform.

As Tam explains, by maintaining the oil and water at the right temperatures, the debris from frying does not stay in the oil but comes away into the water. The water compartment is connected to a pump that filters the debris and pumps clean water back in. This way, both the water and oil will remain clean.

This will help increase the lifespan of the oil fivefold, says Tam, making the product both green and cost-effective. The officers at PlaTCOM, which is a wholly-owned subsidiary of Agensi Inovasi Malaysia (AIM), were intrigued. So, they gave Tam the initial funding to build the prototype.

A short time later, Perera received a call from Tam. “He said, ‘The prototype is ready, would you like to have a look?’ So I drove to Penang. And there it was. He said, ‘[Has] anyone told you that you can’t throw ice into boiling oil?’ I said, ‘No, you can’t’. And he said, ‘I am going to do that now.’ He showed me that the temperature of the oil was very high. And then he threw some ice into it. Nothing happened. It just went through the oil and sank into the water.

“The beauty of it was that when he was frying nuggets, there were no splashes, nothing. It was very quiet and even when he lifted out the nuggets, they were not a dark ugly brown but a very light brown. It was fantastic,” enthuses Perera.

Tam says the idea for such a fryer came to him when he was studying engineering in Queensland, Australia. He enjoyed deep-fried food but, like most Malaysians, was wary about the oil that was used.

He put his mind to work and slowly, the pieces came together for the FRESCO (which is Spanish for “fresh”).

The oil in the FRESCO fryer sits on a layer of water, which is kept at a constant 45°C. This, according to Tam, is the ideal temperature for water to make contact with oil without any untoward incident.

“Normally, when you drip water into hot oil, there is a small explosion and the oil will go bad. But we have discovered through a long and painful period of R&D that water at 45°C best makes contact with oil [that is] at 180°C,” he shares, laughing. He managed to escape the R&D process with only a few battle scars.

The heater in the FRESCO only heats the oil, so the temperature of the water is not affected, he explains. In fact, the heater is located in the middle of the oil so heat can travel upwards to cook the food.

Tam has also included a safety feature in the machine. “If the water reaches a point where it [the machine] overheats, power will be cut off,” he shares.

He put in the safety feature because his research showed that water at any temperature above 60°C will produce steam, which spoils the oil.

Basically, he says, FRESCO produces fried food in its cleanest and “healthiest” form. “When you use other oil fryers, the cooking oil will change colour after the first fry. But FRESCO keeps the cooking oil clean even after five fries because the water cleans the dirt out of the oil,” he says. This means that restaurants and other F&B outlets will stand to save a lot of oil and money in the long run, he adds.

“Nowadays, people are very health-conscious. They don’t want to eat out because there are some places that reuse their cooking oil until it is black,” he points out. This has been highlighted in the media over the years. Some people are concerned that the cooking oil is not pure, he adds.

Some consumers have turned to the latest must-have kitchen gadget — the air fryer. It is easy to use and does not require oil but Tam believes this affects the taste of the food.

While the idea of using water to filter oil is not new, FRESCO is the first of its kind in Malaysia. Tam’s design is also different because of the pump system that keeps the water at a constant temperature. He is in the process of getting the system patented and trademarked in Malaysia.

He credits PlaTCOM for helping him. “I thought of this four to five years ago, but PlaTCOM really helped with the A to Z of bringing this concept to commercialisation.”

“It helped with the direction of my idea and which markets to start with,” he adds. The experience with PlaTCOM and its high-impact programme 2 (HIP2) was smooth sailing from day one. “I went to them with a new innovative idea with no design but they liked the idea. From there, I went for an interview with SME Corp and they liked the idea too. That is how I got the funding,” he says.

The funding was for material, equipment and the cost of operations. The patenting fee will be paid by his company, TKS Winwell Equipment Supply Sdn Bhd, which has been in operation for the past seven years. The company manufactures coffee machines, sauce processors and other industrial food machinery in its factory in Penang.

Tam also makes machines that process massage oil and pharmaceuticals. “We have been in the industrial machinery business for seven years and this is our first venture into the consumer market.”

It has been a whirlwind adventure for Tam. He only started working on FRESCO last August and a few months later, it was ready for commercial sale. The first model was ready in March this year. “When I first got my hands on the maiden model, we put it through testing until the end of May and every test went off without a hitch,” he says.

In June, the machine was sent to the Standards and Industrial Research Institute of Malaysia (Sirim) and is now awaiting official certification.

FRESCO is only available for commercial use right now, but Tam hopes to market it to the public soon.

The commercial FRESCO machine is as big as a table, while the one he hopes to market to households will be small enough to be kept on a kitchen countertop.

Tam says the household unit will be priced at RM3,800. “FRESCO is priced competitively because we use local materials but maintain the same quality as our Japanese competitors.”

He hopes to take FRESCO to Indonesia before entering other Asean markets such as Thailand.