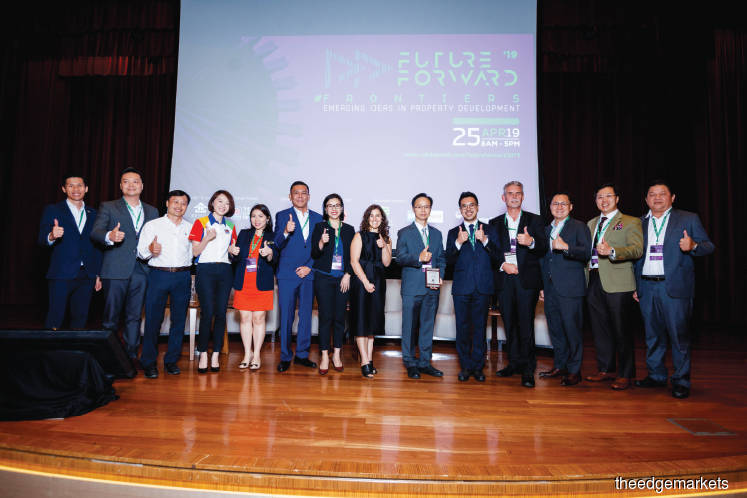 Rehda Youth, the youth division of the Real Estate and Housing Developers’ Association Malaysia, held its 4th Future Forward Forum at the Connexion Conference & Event Centre in Bangsar South, Kuala Lumpur, on April 25. It attracted over 200 participants, including property developers and architects. With #frontiers as the theme, the event showcased emerging ideas that could revolutionise projects, from conception to execution.

“The Future Forward Forum 2019 is a significant platform for Rehda Youth to promote learning and gather inspirational ideas for our property development community. We strongly believe in the importance of education and knowledge sharing among our members,” Ethan Lai, organising chairman of the forum and Peridot Development Sdn Bhd project director, said in his welcome address.

“We are pleased to have local and international speakers today who will share their respective expertise.”

The forum was divided into three sessions — Business Models, Building Technology and Lifestyle.

One key trend is the rise of non-bank financing, recently created by investment managers, superannuation funds and insurers to channel and manage high-net-worth money, she said.

Other funding avenues may come from the tech sector. For instance, China’s largest e-commerce companies, such as Alibaba and Didi, have diversified into the provision of financial services, Kim highlighted.

“Property advisers in China believe it may not be long before these companies start to provide residential mortgages as well. Peer-to-peer financing platforms may also be an alternative source of project financing,” she said.

“While these alternative financing models may work in other countries due to their unique global environment, they may or may not work in Malaysia. Government involvement and regulation are key to the shaping of some of these models for the future.”

Kim said alternative asset classes, such as co-working spaces, are attracting some interest from investors. However, there are doubts about the business model’s sustainability.

“Some popular near-term ideas we are expecting — or which have already emerged — as the industry evolves are landlords developing their own co-working brands; partnerships between landlords and co-working space operators; and operators buying entire buildings instead of leasing them.”

While Kim gave participants an idea of what is happening around Asia-Pacific, Nightingale Housing Australia’s Kulas informed them of a business model that builds a community while providing returns.

She said Melbourne’s population is growing, which has led to a lack of housing, and the government has no action plan to deal with the situation. Moreover, high-density developments in the city and suburbs have led to social isolation due to fewer opportunities for interaction.

To address this, Nightingale Housing, through its associate architectural firm, Breathe Architecture, embarked on The Commons.

Built on a 0.18-acre parcel in the suburb of Brunswick, which is 6km from Melbourne’s city centre, The Commons has 24 one to two-bedroom apartments with built-ups of 592 to 807 sq ft. It was completed in 2014.

“The aim of The Commons was to design a multi-residential building for owner-occupiers. In Melbourne, 85% of the multi-residential housing stock is investor-owned and the quality of that stock … the emphasis on where the money is spent, is tailored to investors’ needs and not those of owner-occupiers. So, we were really trying to fly in the face of that,” Kulas said. “The idea of The Commons was building less to give more. That meant taking out certain elements of the project to the benefit of all.”

For example, the laundry area was removed, releasing two sq m of space in each unit that was added to the living area, she said. The laundry area is now housed in a communal space where six washer dryers are shared among residents, and it is the “hardest working social space” in the development.

The units are well insulated and ventilated, the bathrooms have no tiles, the fittings are chrome-less and the entire building is powered by green energy. With public transport available nearby, there is no basement carpark, resulting in savings of A$750,000 in the cost plan.

Nightingale Housing completed another development, Nightingale 1, in 2017 and has several other projects in the pipeline. Nightingale 1 is a 5-storey building with 20 units, with built-ups of 560 to 861 sq ft and which were priced from A$415,000.

Feisal discussed digitalisation in terms of design, financing and operational models. This involves using established platforms and evolving them by creating new applications and integrating artificial intelligence into data-driven platforms.

“The innovations include the Sustainable Systems Integration Model (SSIM). The digital platform was developed to tackle key perimeters of projects, which cover cost, financing, environmental and sustainable platforms,” he said.

Feisal revealed that Aecom invests in immersive labs, which are a set of labs created around the world. “This platform is one of the key areas of our research and development, and we have key persons and partners developed over the years to test new developments and technologies.”

These technologies include virtual reality — which has huge potential and benefits for the architecture, engineering and construction industries — and augmented reality, he explained.

Next to speak was Snguanyat, who talked about 3D printing. SCG manufactures and distributes building materials and construction products, and has invested in 3D printing to make three-dimensional solid objects from a digital file.

The company’s efforts for the past 15 years have resulted in the development of two prototype robots that are capable of building construction products and assets, he said.

“One of the underlying themes here is single sources of data, from design through to implementation,” said Amos. “At the end of the day, what we are all about is taking the dull, dangerous and dirty work and employing robots to do the repetitive tasks, making it less human capital intensive, and being smart about how we adopt robots in the construction industry.”

Amos also emphasised that robotic construction is to complement human resources and not to replace humans.

The last session featured Freeform Sdn Bhd founder and director Adrian Yap, AirAsia Bhd head of Esports Allan Phang and The Mall Group Co Ltd Thailand senior vice-president Maythinee Suvarnapunya. They talked about the key elements of consumer engagement and how the experience is just as important as the design-build of a physical structure.

Freeform is the company behind the popular Urbanscapes and Tiffin Food Court events, which use alternative spaces to great effect.

“An alternative space is a place that was built for a specific purpose that we then use for some other purpose,” said Yap. “We see space slightly differently from developers. They may see just an office block or apartments, while we look at what we can do with the space on a short or medium-term basis.

“There is an opportunity here, and people have come to realise that this is an actual valid model for development. We are basically looking at underutilised and undervalued spaces, and extracting more value from them — beyond just a carpark, for example.”

Based on research by McKinsey, Yap said millennials, who make up a large part of the world’s population, are more willing to pay for experiences than for material goods. There is also a high level of social media use and with the oversaturation of digital advertising, many brands are looking into experiential marketing.

“We are living in an experience-first world, as opposed to a product-first world, where people are chasing fresh and unconventional experiences and events. Spaces they are interested in are authentic, narrative-driven spaces and that are easily Instagrammable. These are the key trends and observations we work from,” said Yap.

AirAsia’s Phang spoke on creating experiences based on interest. He shared how AirAsia is creating awareness of electronic sports or Esports, which is spreading like wildfire across the globe. He believes it is a sport that many property developers should consider when it comes to designing spaces.

Already, shopping malls such as Sunway Pyramid and 1 Utama Shopping Centre have held Esports events that have drawn large crowds of spectators.

As evidence of the industry’s immense growth, Phang related his visit to China. “The finals of The League of Legends World, China’s most well-known PC game, was held at the Beijing National Stadium (also known as the Bird’s Nest) in 2017. The tickets were sold out in minutes and the event attracted 91,000 spectators.”

With the Malaysian government putting aside RM10 million to develop the sport in the country, this could be a game changer for interested parties.

She said the mall is designed to provide a place for people to socialise and interact with one another, which she believes is important. While some may argue that malls are a dying breed, she begged to differ, saying that they provide a safe space for human connection.

Suvarnapunya revealed that using big data is also important to gauge what consumers want. “We collect data on customers’ credit card spending habits, which helps us to create a unique luxury retail experience for them to interact with one another. The digital transformation has changed our lives.”

Next year, Rehda Youth will continue its Future Forward Forum with a line-up of new and previous speakers. The date and venue have yet to be confirmed.