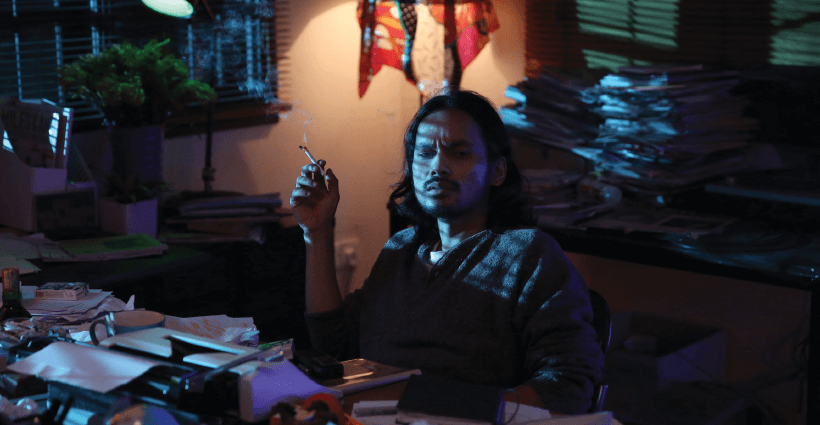 It starts off like a dream, an intimate yet somewhat tentative conversation between Aditya, a struggling writer, and an effervescent but mysterious Airis. They sit side-by-side on a pier in a seemingly chance encounter, both awaiting the sunrise. This wistful tone sets the mood for Terbit 23, the 17-minute short film by Taufiq Kamal, who is the BMW Shorties 2014 grand prize winner.

The film, which premiered last Thursday, is the result of the RM75,000 production grant the budding filmmaker received from BMW Group Malaysia. After winning the short film competition last year with his contemporary and millennial interpretation of a love story, entitled Rozita binti Roslan, Taufiq’s newest short film further pushes the boundaries of traditional narratives and conventional filmmaking.

“It’s about finding the inner voice,” says the production-designer-turned-director after the premiere, adding that the visual-driven film tries to capture the struggle of the main character trying to find breakthrough from the state of flux he is in.

Rather than a linear narrative approach, Terbit 23 experiments with a demonstrative presentation, designed to evoke rather than dictate the thoughts, perceptions and feelings of the characters.

The abstract and artsy tone is intentional, Taufiq relates. “This is my take on how I see things and how I want to tell my story, to reimagine cinematic conventions and to explore the art form in a radically new direction.”

In the film, starring first-time actors Dali Abdul Azis and Bianca Li Wei Brand, as the duo dialogue, the audience is taken visually to a different abstract realm. Here Taufiq opens up a space that allows the viewer to decide his or her response. His main character, Aditya, continually smokes throughout, which the 30-year old director says is a symbolic representation of time.

“It also symbolises life in a way. You think that you always have time, but you’re always running out,” explains Taufiq, using his character’s writer’s block as a mirror.

Produced over three months, Terbit 23 also represents a larger story. The sense of romance and idealism in the tone embodies a generation trying to articulate in their distinctive language, at the same time also capturing the underlying frustrations of a fragmented generation, one that Taufiq and his crew are a part of.

He highlights, “The idea of Rozita binti Roslan came out of an idea between me and a group of friends. We wanted to tell the story differently.” Terbit 23, he adds, is another idea he had to challenge the mainstream film making culture.

“A competition like this is very important,” says Taufiq of the BMW Shorties, “You need a good platform to showcase their films, besides getting the funding.” The film will be submitted by BMW to various short film competitions. The luxury car brand had previously submitted winners’ works to international festivals such as the Cannes Film Festival and the Busan International Film Festival.

Currently in its ninth year, the BMW Shorties competition is the longest running short film platform in Malaysia. The 2015 competition is currently open for entries until Nov 2. For further information and details on how to participate, visit www.bmwshorties.com.my. Taufiq’s original entry, Rozita binti Roslan, is currently available on the website, along with other finalists’ films.