New CEO to get money for FAM

PETALING JAYA: It is all systems go for the privatisation of the M-League next year as the FA of Malaysia (FAM) has appointed Kevin Ramalingam as the chief executive officer of Football Malaysia Limited Liability Partnership (FMLLP).

The establishment of FMLLP was officially set in stone following the signing of a memorandum of understanding between FAM and International media rights company, MP & Silva (MPS) earlier this year. MPS had pledged RM1.26 billion towards the partnership over the 15-year period of the contract

Kevin has been given a three-year contract which starts immediately. His appointment comes as no surprise as he has been involved in football for the past 14 years.

FAM’s Executive League Committee headed by president Tengku Abdullah Sultan Ahmad Shah interviewed 10 candidates but decided to choose Kevin whose expertise is in the commercial and technical aspects of football.

“We interviewed many candidates but decided on Kevin because of his vast knowledge of Malaysian football.

“FAM is hoping that with his expertise, our M-League will be handled with more professionalism and we are confident Kevin will improve the standards of the league,” said Hamidin.

Kevin said he is thankful to FAM for giving him this opportunity as it has always been his objective to help take Malaysian football to greater heights.

“It is not going to be easy because there is a lot of work to do. My priority is to secure more sponsors for the M-League as we cannot only depend on the income of MPS. Since we started talking about privatising the League, there has been good feedback from potential sponsors.We don’t want to be tied down to one sponsor,” he said.

Kevin said that some people believe his appointment is liable to conflict of interest since he was the principle consultant of Red Cards Pte Ltd which was involved in the the MPS and FAM partnership.

“I left Red Cards in January and its contract with FAM has expired. This new role is my full-time job, so there is no need for people to think that I had the advantage to get this job. My knowledge about Malaysian football is the only advantage I had as FAM was also considering to have a foreigner as the CEO of FMLLP,” he said.

Kevin is currently identifying his team and is open to hiring foreigners but his priority would be people in the corporate world who can contribute to the business side of the sport.

“I don’t want to pinch anybody from the clubs as it would be unfair to them. I will get people outside the football fraternity and if there is need to hire a foreigner, I would as long as the job is done.”

He also assured transparency towards the media and the supporters and every progress made would be revealed.

“We have a lot of plans in the pipeline and it would be shared with everyone,” said Kevin after the press conference at Wisma FAM yesterday.

On other matters, Hamidin said that FAM is in the process of finalising its sponsors and official broadcasters for this year and an announcement will be made soon. 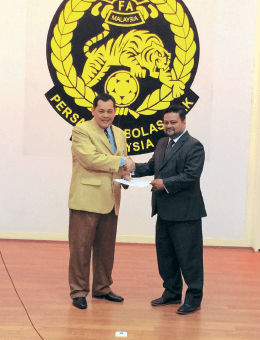