New airport helps China rival US in the skies 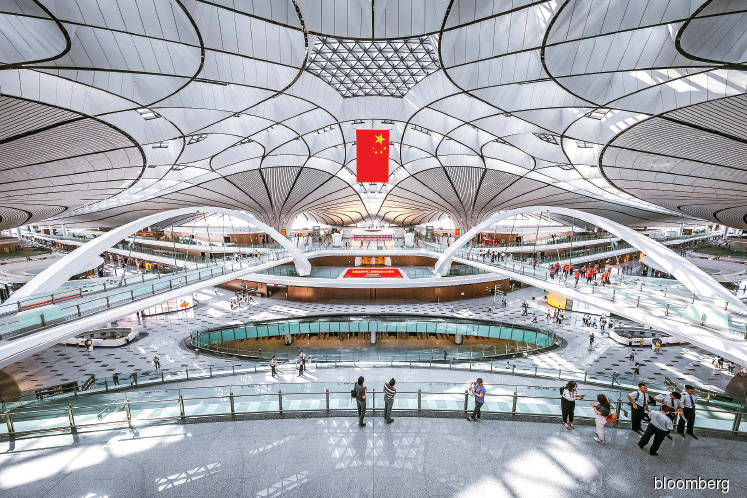 Inside the Beijing Daxing International Airport. The state-of-the-art terminal is designed to eventually handle more than 100 million passengers a year. Photos by Bloomberg The starfish-shaped structure, designed by the late Zaha Hadid, has been hailed by state media as a ‘new gateway’ to the country. It opens just in time for the People’s Republic of China’s 70th birthday.

Just five years ago, Daxing was a dusty area of farmland to the south of Beijing, largely neglected by visitors to the city. That is no longer the case, now that an enormous airport has emerged there to thrust China even closer to toppling the US as the world’s biggest aviation market.

The Beijing Daxing International Airport, an 80 billion yuan (RM46.93 billion) starfish-shaped structure hailed by state media as a “new gateway” to the country, opened just in time for the People’s Republic of China’s 70th birthday. A state-of-the-art terminal designed to eventually handle more than 100 million passengers a year is symbolic of Chinese President Xi Jinping, who faces a raft of challenges, including a trade war with the US, a slowing economy and mass protests in Hong Kong.

Xi has identified aviation as a key strategic industry. The president attended the official opening ceremony of the new airport, designed by the late Zaha Hadid, last Wednesday. Within two decades, annual passenger traffic in China’s skies will reach 1.6 billion, according to the International Air Transport Association (Iata), more than the country’s population today. China has set a goal of having 450 commercial airports by 2035, almost double the number at the end of 2018. It has also developed a jet to compete with Boeing Co and Airbus SE.

The vast new airport should increase Beijing’s passenger capacity by 60% and help unclog the capital’s other international airport — the second busiest in the world behind Atlanta — to the north, which often has long delays despite a huge new terminal opening there ahead of the 2008 Summer Olympics. Bottlenecks at the Beijing Capital International Airport likely capped annual passenger traffic growth at an average of 4% from 2013 to 2018, Bloomberg Intelligence analyst Denise Wong said.

China has little options but to spend big and fast to have a shot at keeping up with demand. In its latest annual report on the commercial aviation market, Boeing said it expects airline passenger traffic in China to grow 6% a year. McKinsey & Co said the extra slots at Daxing — which has four runways initially and eventually seven, including one for military use — could open new direct connections to places such as San Diego. Beijing now joins major cities, including London, New York and Tokyo, with more than one international airport. The high-speed rail connecting Daxing to West Beijing began operations at the end of September.

“It can get 10 if not hundreds of new destinations connected to Beijing over the years,” said Steve Saxon, a McKinsey partner in Shanghai. “This is the power of having large connecting hubs.”

Daxing also upends the government’s traditional one-international-route-per-airline model that left long-haul services from Beijing in the hands of Air China Ltd. The new site will become a launch pad to Europe, Asia and beyond for the other two of China’s big three carriers: China Eastern Airlines Corp Ltd and China Southern Airlines Co Ltd. They will both get their first-ever direct flights to cities including Paris and Moscow.

The goal is to restyle Beijing as an international transport hub as air travel surges with China’s expanding middle class and a greater desire to venture overseas. The opening of Daxing, which will also help integrate Beijing closer with Tianjin and Hebei, should put China on a stronger footing to compete with traditional transits such as Singapore and Hong Kong as well as younger hubs like Bangkok, Seoul and Kuala Lumpur.

China still trails many major aviation markets in Asia in terms of connectivity, according to a report by OAG Aviation Worldwide published last Tuesday. Singapore and Hong Kong are the region’s most internationally connected hubs, the report showed. The Shanghai Pudong International Airport, China’s top entry, came in eighth.

Iata expects 4.6 billion people to take a flight in 2019, a figure that will almost double to 8.2 billion in 2037 as flying penetrates deeper into the enormous populations of India and Indonesia. Daxing is just one of many airport projects under way in Asia, collectively costing more than US$100 billion (RM419 billion), in a race to handle all those passengers. A new terminal opened at the Shanghai Pudong International Airport on Sept 16.

The relaxation of China’s one-route, one-airline policy at Daxing will encourage Chinese carriers to apply for international routes once monopolised by their competitors, said Yu Zhanfu, a partner of Roland Berger Strategy Consultants in Beijing who focuses on aviation. “Beijing will be a good spot to take a break without making a big detour,” Yu said.

Among the tons of steel and glass at Daxing, passengers would find five traditional-style Chinese gardens with ponds, wooden pavilions and stone bridges. The new airport also has facial recognition and paperless check-in systems using technologies from companies including China Unicom and Huawei Technologies Co Ltd.

The Civil Aviation Administration of China (CAAC) is offering airlines incentives to use the new airport. They would get priority when it comes to obtaining rights for international flights, CAAC deputy director of transport department Yu Biao said in July. Foreign carriers could choose to operate in both airports in Beijing, or one of them, but those that switch to Daxing can acquire new routes or more convenient slots, Yu said.

Daxing expects one-fifth of its passengers to be transfers by 2025. Among international flag carriers, British Airways said in July it planned to shift its direct Heathrow-Beijing flights to the new airport from Oct 27, helping it maximise a code-sharing agreement with China Southern. China Eastern has kept its Beijing-Shanghai route at the old airport, which is closer to the central business district.

“The next step will be for us to keep expanding new routes,” said Yu. “We’d like to see more foreign carriers operate at Daxing.” — Bloomberg