“We are testing the temperature of the market, so we might expand [our network] if the market response is good,” Tunamaya Beach & Spa Resort director Gan Hong Lee told reporters after the launch of the charter airline’s flight between Subang and Tioman by Tourism and Culture Minister Datuk Seri Mohamad Nazri Aziz yesterday.

Gan said the idea came after Berjaya Air ceased its commercial flights to Tioman in September this year due to the monsoon season, which has affected tourist arrivals to the island.

“More than 30% of our (Tunamaya Beach & Spa Resort’s) customers travel to Tioman by air. As Berjaya Air did not indicate whether it will resume flights to Tioman, I hope that with this (Tunamaya Air’s) service in place, the tourist numbers will return,” he said.

AF Jets is a privately held company involved in various aviation businesses including air charter service, aircraft leasing and engineering. It was incorporated in 2006, and its major shareholder is Amrul’s wife, Noraizarrina Burhanuddin.

Amrul said Tunamaya Air’s two aircraft are on a lease-to-buy contract from a special purpose vehicle which AF Jets and Gan jointly own, with a contract period of not more than three years.

Earlier, at the launch, Nazri said his ministry has been tasked to attract 29.4 million tourists next year, 1.4 million more than its 2014 target.

“I have proposed to the prime minister to implement policies that are friendly to China tourists, such as visa-free entries, so that we are equally competitive with Thailand and Indonesia,” Nazri said.

He noted that tourist arrivals from the rest of the world have been growing in 2014 except from China due to the twin Malaysia Airlines tragedies.

“Thailand and Indonesia are giving [China tourists] visa-free entries. If we do nothing, how are we going to compete with them?” Nazri said. 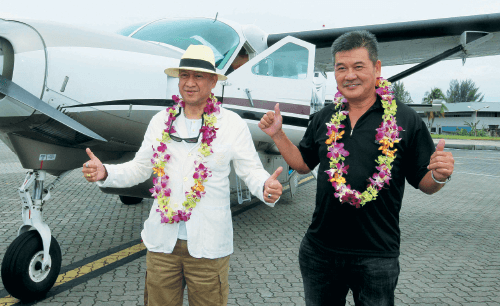