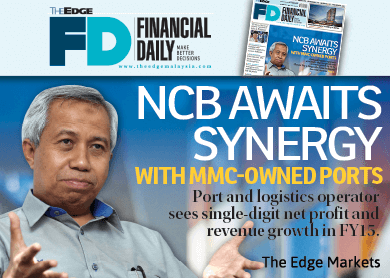 KUALA LUMPUR: NCB Holdings Bhd, whose prized assets include Northport in Port Klang, Selangor, said it had yet to capitalise on product and market synergies with Johor Port, Port of Tanjung Pelepas (PTP) and Penang Port, even though they share a common shareholder in MMC Corp Bhd.

“The plan is there for a collaboration [among the four ports], but it will take time. That’s because we don’t decide on which [shipping] line should call [at which port]. So, even if PTP wants Maersk Line to call at Northport, it is not their (PTP) call but the shipping line. It is not that easy,” Abi Sofian told The Edge Financial Daily in an interview last week.

It has been reported that MMC intends to raise its stake in NCB to gain management control of the group. As revealed by The Edge weekly on June 29, MMC has been in discussions with Kumpulan Wang Persaraan (Diperbadankan) (KWAP) to acquire the latter’s 9.18% stake in NCB.

Although MMC on July 1 came out to say that it had not approached KWAP to acquire its equity interest in NCB, Abi Sofian noted that the former had been aggressively taking control of the country’s port assets.

“They (MMC) have been talking to everyone (NCB shareholders).”

Nevertheless, Abi Sofian said whether and when it happens will depend on Permodalan Nasional Bhd (PNB), which remains NCB’s largest shareholder with a 47.7% stake.

“They (PNB) may see things differently. NCB’s share price is now trading at the RM3.50 level. If MMC wants to raise its stake, it could offer a higher price,” he added.

“MMC may be interested to come into NCB and work with Northport, but look at what they have done within their own group of companies?

“How much collaborations have occurred among PTP, Johor Port and Penang Port to date? They seem to work independently. So, how do you expect them to collaborate with Northport and Kontena Nasional Bhd (NCB’s logistics unit)?” said Abi Sofian.

“I want to see what they (MMC) are doing to generate incomes. Of course, they have money to go and buy from KWAP and increase their stake, but at the end of the day, NCB’s largest shareholder PNB must look at this objectively,” he noted.

Abi Sofian, however, conceded that there is potential synergy to be made among the ports in the long term, but he stressed that it is crucial to have the right management in place.

“The way I look at it, MMC does not have people in the port business. Rather, they are people in business. These are two different things. The requirement for [running a] port is not just having the infrastructure — you need to also know who to employ.

“If MMC brings more business to Northport or Kontena Nasional, of course we are happy,” he added.

Already, he revealed that a committee had been formed, where representatives from Northport, PTP, Johor Port and Penang Port will meet every three months to identify areas of possible collaborations.

“Action plans have been identified and can be implemented. We can leverage each other’s strength in the future,” said Abi Sofian.

The container business will remain the main contributor of revenue for FY15. Northport saw an 8.4% increase to 1.12 million TEUs (20-foot equivalent units) in container volume handled in the first five months of this year, compared with the year-ago period.

Despite ongoing improvements in Northport and loss-making Kontena Nasional, Abi Sofian said the group’s financial results are still being dragged by its logistics arm.

“We aim to divest all non-profitable businesses, such as trucking and warehouse distribution under Kontena Nasional by the end of this year, and hope to achieve our turnaround target by mid-2016,” he added.