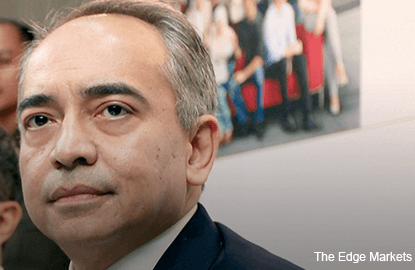 KUALA LUMPUR (May 18): Datuk Seri Nazir Razak will resume his roles as chairman of CIMB Group Holdings Bhd and director of CIMB Bank Bhd tomorrow (May 19) after an internal review cleared him of any alleged misuse of his position or any inappropriate use of the banking group's resources.

Nazir has been on a voluntary leave of absence since April 19 to facilitate an independent review of a money transfer to his account from Prime Minister Datuk Seri Najib Razak. The move follows Nazir's confirmation of The Wall Street Journal report on March 31 that showed that nearly US$7 million was transferred to his private account from those of his brother, Najib, ahead of the 2013 election, which was then passed on to politicians in Barisan Nasional.

CIMB had appointed an external audit firm, Messrs Ernst & Young, and had sought independent legal advice to assist them with the review.

In a statement today, CIMB Group said the findings from the review concluded that Nazir did not misuse his position as the group chief executive at that time nor was there any inappropriate use of the bank's resources.

"However, the detailed examinations conducted during the review identified some process shortcomings, and the boards (of CIMB Group and CIMB Bank) have instructed the management to put in place plans for immediate improvements as well as strengthened internal rules and processes to avoid reoccurrences moving forward," it added.

"The boards welcome Datuk Seri Nazir Razak back to serve as chairman of CIMB Group and director of CIMB Bank. The boards are committed to maintaining the highest standards of corporate governance in our organisation, and this decision was taken with firm intent towards fulfilling these obligations," said CIMB Group senior independent director and audit committee chairman Datuk Mohd Nasir Ahmad in the statement.

"Apart from the findings of the review, the boards also took into consideration the vote of confidence from shareholders for Datuk Seri Nazir Razak's continued chairmanship at our 2016 annual general meeting, as well as his track record of serving the group in various capacities since 1989, in arriving at the decision," he said.