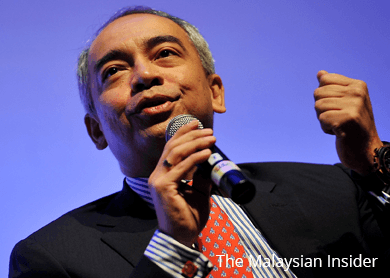 Writing on his Instagram account, the CIMB Group Holding Bhd chairman and brother of Prime Minister Datuk Seri Najib Razak said: “This is worrying. The market is much more negative about Malaysia than the rating agencies, taking us into junk category, way below our fundamentals.

“Suspect it’s due to so much negative coverage in WSJ (The Wall Street Journal), FT (Financial Times) and NYT (New York Times) — all ‘capital’ people read at least one if not all of them.

“We have to change the current narrative about Malaysia with answers or legal suits; can’t just ignore them.”

Nazir did not specify what Malaysia had to answer for, but the country has been in the international spotlight over controversies involving government-owned investment firm 1Malaysia Development Bhd (1MDB), which Najib oversees as finance minister and chairman of the firm’s advisory board.

Najib is also under scrutiny over a RM2.6 billion political donation from a Middle Eastern donor that went to his personal bank accounts.

South Africa, which is a Baa2, is viewed as a B1 borrower.

The report said most developing nations were confronting the same issues that saw Brazil losing its investment grade rating at Standard & Poor’s — a plunge in commodity prices, a slumping currency and political turmoil.