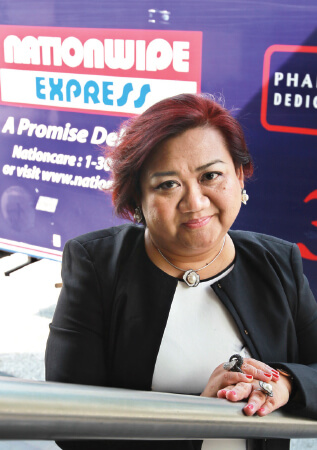 Rozilawati: This is why we want to push for integration as soon as possible. It’s going to be tough but it’s something we are committed to be doing. Photo by Shahrin Yahya

KUALA LUMPUR: Following the signing of a new deal for its acquisition of Airpak Express (M) Sdn Bhd, loss-making Nationwide Express Holdings Bhd maintains it is on track for a turnaround in its financial year 2018 (FY18).

“This is why we want to push for integration as soon as possible. It’s going to be tough but it’s something we are committed to be doing,” said Nationwide’s group managing director Rozilawati Basir. In an interview with The Edge Financial Daily last week, she added that the Airpak acquisition is expected to be a catalyst of growth although the new deal is smaller than an earlier negotiated agreement.

Nationwide initially proposed to buy Airpak’s entire issued share capital for RM33.16 million in November 2016 from owners Ong Eng Lee and Lim Kew Wan. When it spoke to The Edge Malaysia weekly last December, it said the proposed acquisition, which came with a profit guarantee of RM5 million each year in FY17 and FY18, was positive for the group. However, the deal lapsed in May.

The new deal announced last Monday involves a smaller acquisition of Airpak’s business, at a lower price, and without the earlier profit guarantee. The latest deal includes Airpak’s rights, title and interest in and to its courier business for RM15 million cash. Nationwide will also issue 3.01 million new ordinary shares, at an indicative price of 73 sen apiece or RM2.19 million in all, to Airpak.

“We decided to renegotiate the terms after doing due diligence, that’s the reason for the delay [in completing the acquisition],” according to Rozilawati.

The new agreement, which encompasses Airpak’s assets, all of its staff, as well as some of its liabilities excluding old trade receivables, is targeted for completion in the first quarter of 2018. It will also add 90 points of delivery to Nationwide’s existing 200 points, she said.

The deal will see Nationwide register Airpak’s revenue, which grew 15.14% year-on-year to RM29.79 million in its FY16. However, Airpak’s profit attributable to the group has been on a downward trend for the past three years, declining 38.14% last year to RM1.02 million in the FY16.

Rozilawati said Nationwide expects to see cost-savings following the acquisition, as it synergises its operations with Airpak.

On top of that, Nationwide has been working on reducing its own losses by addressing internal issues, which include a change in its operational cost structure.

According to the announcement posted, the group may see its gearing increase to as high as 0.41 times from 0.05 times (as at March 31) if it funds the acquisition entirely via borrowings. Its most recently reported cash balance for the quarter ended June 30, 2017 amounted to just RM1.89 million.

“We are comfortable with the one-off [increase in] gearing as it will be offset by the new revenue stream from e-commerce,” Rozilawati said, adding that borrowings taken for the acquisition “would be a calculated risk.”

The acquisition of Airpak, Rosilawati said, fits in with the group’s strategy of expanding its business-to-consumer (B2C) or consumer-to-consumer segments, which currently account for just 5% of Nationwide’s revenue. The bulk of its revenue is derived from serving business-to-business (B2B) customers.

This is unlike most of its peers, Rozilawati conceded, which mostly see an even balance between B2C and B2B.

Nationwide faces tough competition in the courier segment from local players GD Express Carrier Bhd and Pos Malaysia Bhd via PosLaju, as well as foreign carriers like FedEx, brands that are more familiar to consumers.

“Customers do say we’re not friendly or approachable enough,” she said, adding that she hopes this will change with the acquisition of Airpak, although Nationwide is late by a few years to jump on the e-commerce bandwagon.

While Airpak’s courier business is seen as complementary to Nationwide’s existing operations, the acquisition of MTR is geared towards the group’s diversification, expansion, and long-term sustainability, she said.

Shares in Nationwide slid one sen to settle at 70 sen apiece last Friday, after having spiked to 77 sen last Tuesday, a day after the renegotiated deal was announced. It has a market capitalisation of RM84.16 million.