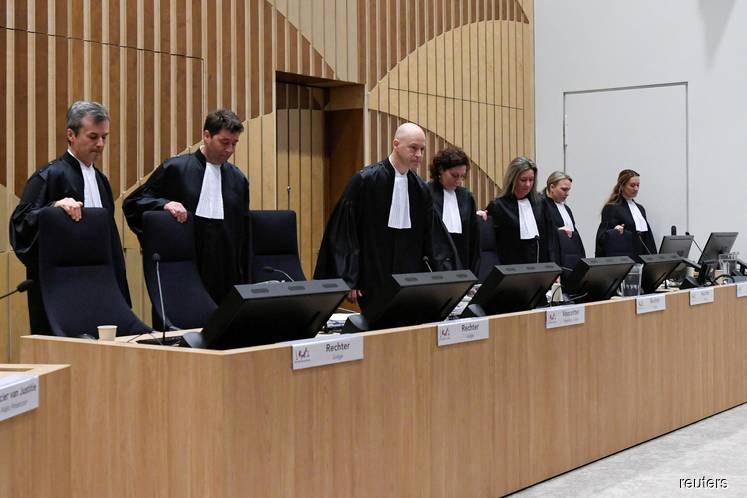 AMSTERDAM (March 9): Relatives sat listening with bowed heads and eyes closed, as the names of all 298 victims of a missile strike on a Malaysian airliner were read out in a Dutch court on Monday, as the murder trial of four fugitive defendants began.

Malaysian Airlines Flight 17 (MH17) was hit by a surface-to-air missile on July 17, 2014, while flying over Ukrainian territory held by pro-Russian rebels fighting government forces. The airliner was on its way from Amsterdam to Kuala Lumpur.

None of the accused in the disaster - three Russians and a Ukrainian — were present in the courtroom and all four are believed to be in Russia. Only one sent a defence lawyer.

Judges ruled that the men had waived their rights to attend and said proceedings would continue without them.

The mood in the courtroom was sombre and hushed as prosecutor Dedy Woei-a-Tsoi read out the names of those who died when MH17 crashed in eastern Ukraine on July 17, 2014.

"The silence in this court during the reading of all the names of the victims makes it (MH-17 disaster) clear once again and that means a moment of silence was fitting," Presiding Judge Hendrik Steenhuis said.

Prosecutors say the suspects helped supply the Russian missile system that downed the plane. Russian authorities have consistently denied any involvement in the missile strike.

The four defendants face preliminary charges of the murder of 298 people and of causing the aircraft to crash, resulting in the death of all aboard.

"Many people have long waited for this day," Steenhuis said in opening remarks. "This tragic loss of so many lives has touched many all over the world."

'Nobody expected a trial at all'

The defendants — Russians Sergey Dubinsky, Oleg Pulatov and Igor Girkin and Ukrainian Leonid Kharchenko — held senior posts in the pro-Russian militias in eastern Ukraine in 2014, according to prosecutors.

"It is very important for us because nobody had expected there would be a trial at all," said Anton Kotti, who lost three family members in the disaster. "We hope the judge gets so much evidence that he can only come to one conclusion: 'guilty'."

Sabine ten Doesschate, a lawyer for defendant Platov, told the panel of three judges that her client "had nothing to do with the crash" ... He is not responsible, not in any way, not with any participation, not in any capacity."

A Dutch-led international Joint Investigation (JIT) team spent years collecting evidence before issuing arrest warrants for the four suspects last year. If convicted, the four men could face sentences of up to life in prison.

However, Russia does not extradite its citizens, and the Kremlin has questioned both the legitimacy of the international investigation and the independence of the Dutch court.

"They (defendants) are now under the protection of the regime in Russia...," Peter Langstraat, part of the team of lawyers representing 398 relatives of 244 victims, told journalists. Langstraat said he hoped "the long arm of justice" would catch up to the suspects eventually.

"Look at what happened to the Lockerbie case," he said, referring to the 1988 bombing of Pan Am Flight 103 over which a Libyan intelligence officer was jailed for life. "Finally you know, justice was done."

Prosecutor Ward Ferdinandusse told the court that the investigation was complicated by ongoing fighting at the crash site in Ukraine and "active obstruction" by Russian authorities.

Russia has denied such accusations, and President Vladimir Putin’s spokesman, Dmitry Peskov, has said the Kremlin will wait to see how the trial pans out before commenting.

Ferdinandusse also said that Ukrainians were sometimes forgotten, as additional victims of the plane's destruction.

"Wreckage and bodies fell from the sky, sometimes straight through the roofs of their houses in eastern Ukraine," he said.

"Many ordinary citizens and emergency personnel worked in difficult conditions in the midst of an armed conflict to recover the victims' bodies."

The aircraft's downing led to sanctions against Russia by the European Union. It also heightened tension between Russia and Western countries who blame it for the disaster.

The dead included 196 Dutch citizens, 43 Malaysians and 27 Australians, among others.