Najib’s trial will not start today 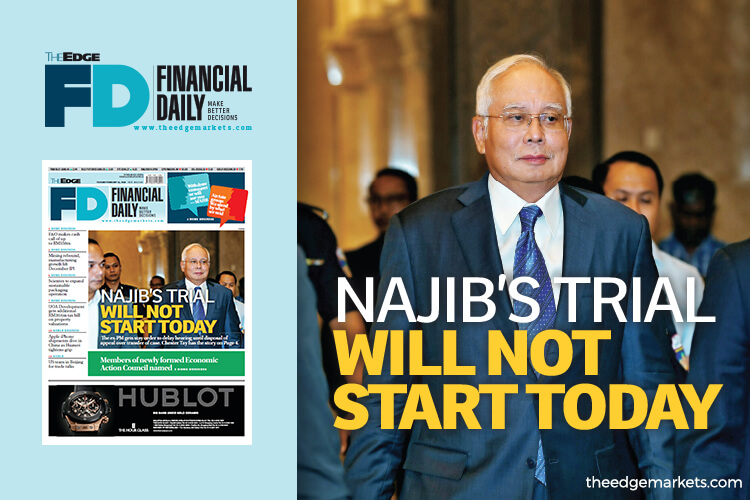 KUALA LUMPUR: The much-awaited first trial of former premier Datuk Seri Najib Razak, involving seven of the 42 charges that he is facing related to the 1Malaysia Development Bhd (1MDB) scandal, has been postponed. No new date was set.

The hearing for the three counts of criminal breach of trust (CBT), three counts of money laundering and one count of abuse of power was scheduled to begin in the High Court today.

However, Najib has succeeded in getting the Court of Appeal to grant a stay of the trial pending the disposal of his appeal over the public prosecutor’s withdrawal of his certificate of transfer on the seven charges.

Najib has claimed trial to the seven charges linked to the alleged transfer of some RM42 million into his bank account from SRC International Sdn Bhd, a former 1MDB unit.

Ahmadi, chairing the Court of Appeal bench, said the court noted the prosecution’s contention that the charges against Najib is serious, allegedly committed by him when he was the prime minister, Bernama reported.

He said the court also acknowledged the prosecution’s arguments that the case attracted international and public interest, hence the commencement of the trial should be on schedule.

“We are satisfied that the applicant (Najib) had shown special circumstances for a stay to be granted,” he was quoted as saying.

Ahmadi said if the stay order were not granted and the trial proceeded, it would render the proceedings a nullity — a waste of time and public money. “We further viewed that we did not find evidence of delaying tactics as claimed by the public prosecutor,” he said.

The CBT and abuse of power charges were first brought against Najib on July 4, 2018, while he was charged for the remaining three counts of money laundering on Aug 8. These charges were filed at the Sessions Court before being transferred to the High Court.

High Court Judge Mohd Nazlan Mohd Ghazali had initially fixed 33 days, from Feb 12 to Feb 28 and March 4 to March 29, for the hearing of the seven charges.

However, Thomas, on Feb 7, applied to withdraw his certificate of transfer to move the seven charges from the Sessions Court to the High Court, to avoid any possible arguments that the transfer was a nullity.

The High Court allowed the withdrawal, based on the Federal Court’s decisions in the Semenyih Jaya (2017) and M Indira Gandhi (2018) cases, which caused doubts in respect of the exercise of powers by the public prosecutor to transfer a case from the Sessions Court to the High Court.

Najib’s lead counsel, Tan Sri Muhammad Shafee Abdullah, said the prosecution was wrong in withdrawing the certificate and that Mohd Nazlan should have left it to the registry to decide which High Court judge should hear the transfer of the cases.

“Under Article 145 (3) of the Federal Constitution, the AG can only institute and discontinue proceedings. He cannot usurp the power of the judiciary,” FMT cited Muhammad Shafee as saying.

Muhammad Shafee said the appeal would become meaningless if the trial proceeded today. “And if we (had) won the appeal, the trial would also become a nullity,” he said.

Outside the court, prominent lawyer Datuk V Sithambaram, appointed to assist the prosecution team, told reporters that the trial would be slightly delayed, but they would be able to get it back on track, adding it is just a legal hiccup.