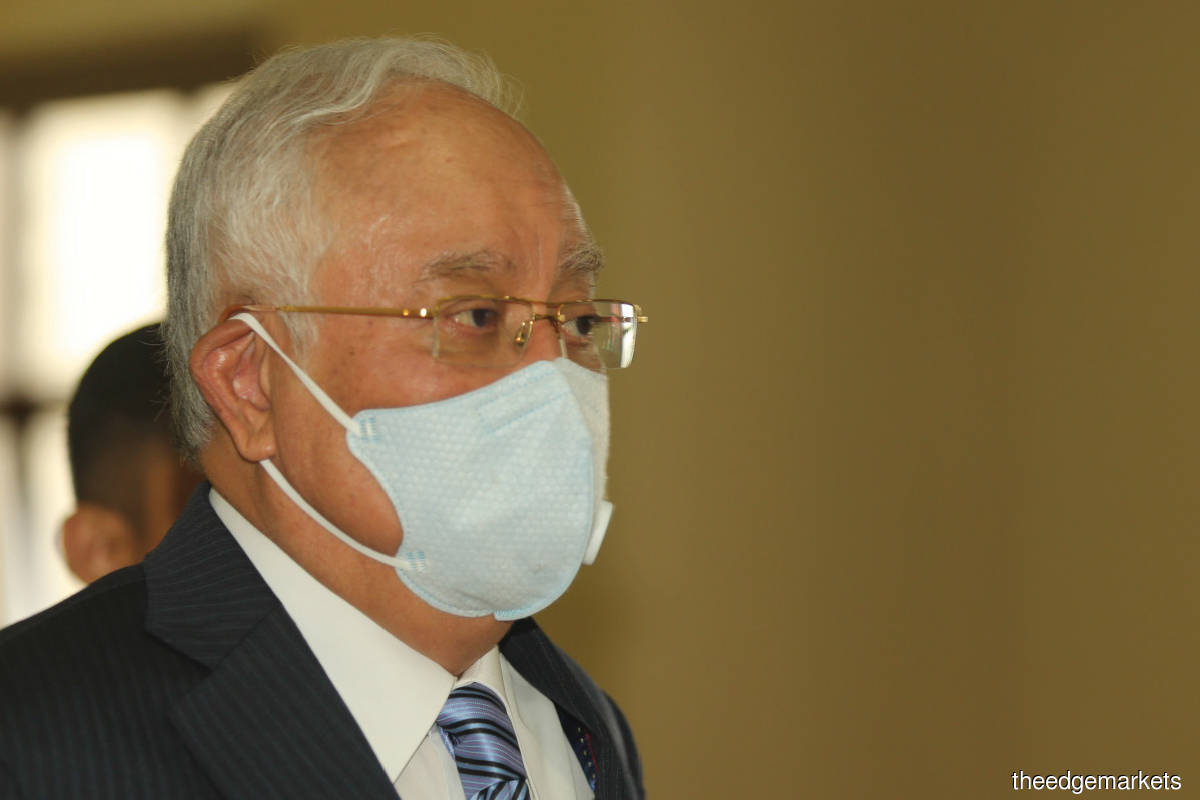 Come Dec 8, Datuk Seri Najib Razak will know if his appeal to set aside his conviction and sentence in relation to SRC International Sdn Bhd, a former subsidiary of 1Malaysia Development Bhd (1MDB), succeeds or not as the Court of Appeal (CoA) is scheduled to deliver its long-awaited decision after having heard submissions on May 18, more than six months ago.

Fresh from leading Barisan Nasional and Umno to victory in the Melaka election on Nov 20, Najib, who is also the Pekan member of parliament, would have spent some quality family time with his daughter Nooryana Najwa, her Kazakh husband Daniyar Kessibayev and their newborn second child.

Najib and BN are on a high after he led the coalition to victory in 21 state seats out of 28, for a two-thirds majority in the Melaka legislative assembly. Umno president Datuk Seri Dr Ahmad Zahid Hamidi put the former prime minister in charge of the BN machinery as he had gone to Germany to seek medical treatment.

Given that more than half a year has passed since submissions, the delay in the CoA decision was brought up in parliament by Puchong MP Gobind Singh Deo.

According to an Astro Awani report on Nov 15, Minister in the Prime Minister’s Department and de facto Law Minister Datuk Seri Wan Junaidi Tuanku Jaafar replied that he was also puzzled as to why the CoA was taking so long — then more than five months — as he claimed that criminal appeals were usually decided on the same day.

Although the minister may be inaccurate in stating that criminal appeals are normally decided on the same day, practice directives for judges stipulate that decisions should be delivered within two months, even though it may take longer at times.

Found guilty on all seven charges

On July 28 last year, the High Court found Najib guilty on all seven charges in the SRC case.

He was found to have abused his power by using his position, as prime minister and finance minister, to approve two loans of RM2 billion each by Retirement Fund Inc (KWAP) in 2011 and 2012. He was also convicted of three counts each of criminal breach of trust and money laundering of RM42 million of SRC funds between Dec 26, 2014, and Feb 10, 2015.

In an 801-page judgment — the case was the first completed one involving Najib as there are several others — the judge said it was “among or near the worst case of abuse of power and betrayal of trust” the court had seen.

In his written judgment, Nazlan highlighted the need for a clean political administration, before finding Najib guilty, which made the latter the highest placed political leader in the country to be found guilty of a criminal offence.

“This very process (the long trial) would arguably be inimical to the ideals of a clean administration that does not tolerate corruption and abuse of power.

“What this court seeks to affirm is the sanctity of the rule of law and the supremacy of the Constitution. No one — not even one who was the most powerful political figure and the leader of the country — enjoys a cloak of invincibility from the force of the law. Any notion to such effect is the very antithesis to Article 8 of the Constitution that enshrines that rule that all persons are equal before the law.”

Nazlan pointed out that Najib was placed in a position of trust by the nation when he led the country for nine years. He expressed regret that the whereabouts of the RM4 billion loan given by KWAP to SRC remain unknown after the bulk of it was deposited in a Swiss account.

“For this reason, I consider the conviction of the accused for abuse of position under Section 23 of the Malaysian Anti-Corruption Commission Act (abuse of power) as the most serious transgression amongst the three crimes, given his position of trust as the nation’s prime minister and finance minister when the offences were committed,” the judge said.

The trial judge also observed that the former Umno president had not shown any remorse during his testimony.

“The accused did not express any remorse and even maintained his defence of no knowledge of the RM42 million from SRC in his mitigation speech. Yet I cannot deny he was the prime minister of the country,” Nazlan said.

“The use of that property by others can never be justified under any circumstances. This is immutable and cannot be obfuscated by any diversions that certain portions of the monies out of the RM42 million were expended for charitable purposes.

“There is quite simply no virtue in donating what one does not own. SRC was established to spearhead the promotion of alternative energy resources for the country. The recipients of the spending by the accused are many and various but unmistakably for the accused’s own purposes and benefits,” he said in alluding to the purpose for which SRC was set up.

Najib’s appeal at the CoA before judge Datuk Abdul Karim Abdul Jalil, along with Datuk Has Zanah Mehat and Datuk Vazeer Alam Mydin Meera, was heard over 15 days, beginning in April and ending after Hari Raya Aidilfitri.

Led by Tan Sri Dr Muhammad Shafee Abdullah, Najib’s defence provided 307 grounds of appeal, a considerable portion attacking Nazlan’s knowledge of criminal law as the judge, who had worked at Maybank, was brought from the High Court’s commercial division to preside in one of the most anticipated criminal trials the country has witnessed.

Shafee questioned some of Nazlan’s decisions, and accused him of having “poisoned the judgment” as well as making assumptions that were not in witnesses’ testimonies.

“If the judge meddles with the records, how can we trust his findings? It shows the judge could be biased. It is only trite law that someone who is supposedly well versed in the field [but] is hopelessly incompetent, can [he] not be considered biased in this? There is no explanation of a blunder of this sort that has happened. By incorporating something that was not there, the element that had not been there, the judge ‘poisoned his grounds of judgment’,” Shafee maintained, adding that the defence had made comparisons of the court transcripts and recordings of the trial.

For these reasons, they asserted that the conviction was unsafe.

Ad hoc prosecutor Datuk V Sithambaram, who led the prosecution, defended Nazlan’s findings. He contended that the money did not come from the Arabs but it was businessman Low Taek Jho (Jho Low), a central character in 1MDB, who had masqueraded as the Arab donor.

He also told the court that Najib, then finance minister, ought to have been aware of the monies being deposited into his accounts.

“Moreover, as he was also finance minister then, he ought to have ascertained that the monies transferred were from legitimate sources.

“Is it believable that the Saudi king is helping to regularise [Najib’s] account [when there is a shortage of funds] for him to issue cheques further? It was Jho Low, who was masquerading as the Arab donor,” Sithambaram argued.

The prosecution asserted that the conviction and sentence were safe, although it had initially appealed the sentence for being too lenient.

Make or break for Najib

The Dec 8 verdict is pivotal as it could revive Najib’s political fortunes.

For the 68-year-old, who still has a large following, if his appeal is dismissed — or if a fine exceeding RM2,000 or a jail term of more than a year is imposed — he will be disqualified from contesting in the 15th general election (GE15), which has to be called by mid-2023.

An acquittal would pave the way for Najib to contest and defend the Pekan parliament seat, a seat he inherited in 1976 from his late father, Tun Abdul Razak Hussein.

Should Najib fail at the CoA stage, he can appeal to the Federal Court.

Following the resounding victory in Melaka — albeit with a rise in popularity of only 3% — many among Umno’s leadership, such as deputy president Datuk Mohamad Hasan, have called for an early election.

Najib’s defence had attempted to postpone the Dec 8 decision date, but the request was denied.

Najib’s wife, Datin Seri Rosmah Mansor, who is facing three counts of graft in relation to a RM1.25 billion school solar hybrid project, will not be at her husband’s side on Dec 8, as she is scheduled to testify in her own defence — she is being impeached by the prosecution.

If a decision to uphold Najib’s conviction is entered on Dec 8, the appellate court will listen to his defence’s bid to reduce his sentence while the prosecution will argue why the sentence should stay.

Najib will still have to appear in court in any event as his 1MDB trial continues from Dec 13 to 17.