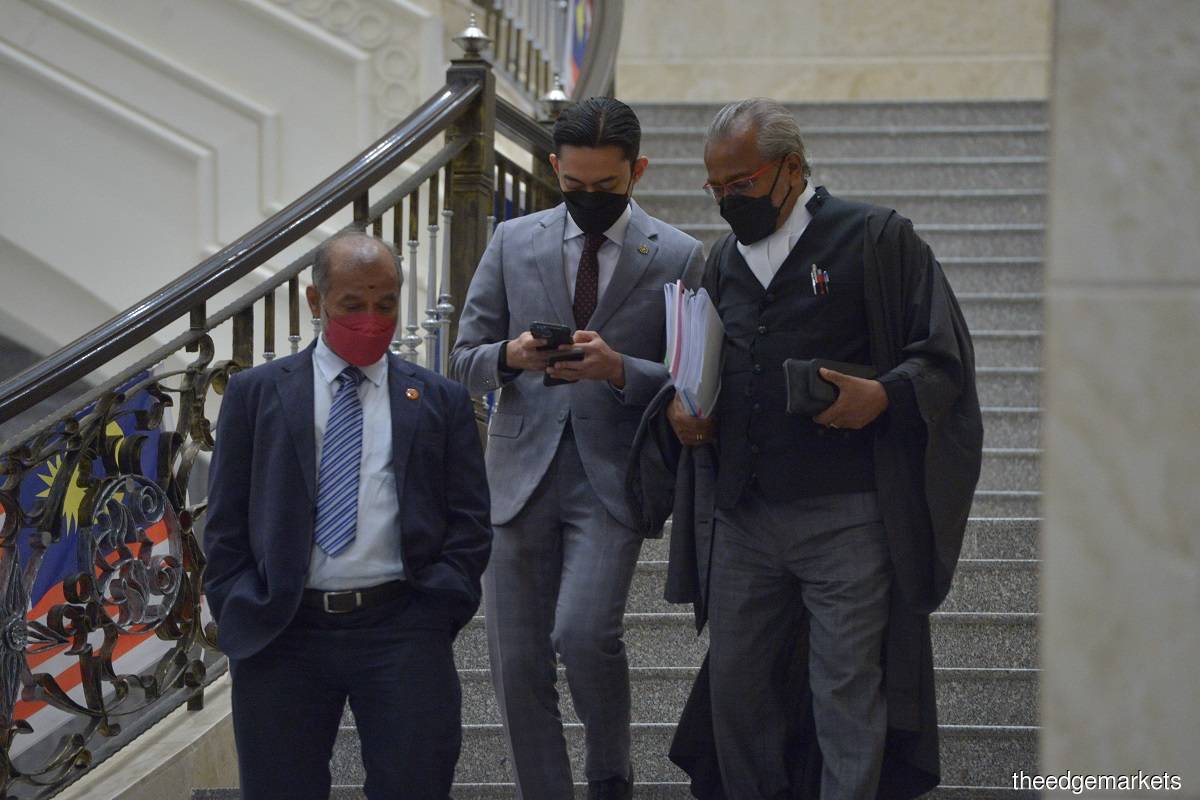 Shafee (right) contended that he was ill-prepared to submit to the court on Tuesday (Aug 23), due to how late he was informed of the application, and with him being occupied with a symposium in Parliament, he asked the court for an adjournment until Wednesday morning to allow him to submit on the application. (Photo by Mohd Suhaimi Mohamed Yusuf/The Edge)

PUTRAJAYA (Aug 23): Datuk Seri Najib Razak’s defence has yet again requested an adjournment of proceedings of the former premier’s final appeal in the Federal Court against his conviction in the SRC International Sdn Bhd case, but this time joined by his former counsel Tan Sri Muhammad Shafee Abdullah.

As Tuesday’s (Aug 23) session resumed after a brief recess, Najib's counsel Hisyam Teh Poh Teik informed the Federal Court panel that Shafee would be joining him in submitting the defence’s application to recuse the panel’s chairperson Chief Justice Tun Tengku Maimun Tuan Mat.

In response to this sudden development, Tengku Maimun sought clarification on the matter, noting that as far as she was informed Shafee had been discharged as Najib’s counsel. She also asked Hisyam to resume his submissions.

Springing into action 10 minutes later, Shafee informed the court that he was just informed of the defence’s application hours ago, and that he would only be submitting on a part of the application, while Hisyam will submit on the other grounds.

Shafee contended that he was ill-prepared to submit to the court on Tuesday, due to how late he was informed of the application, and with him being occupied with a symposium in Parliament, he asked the court for an adjournment until Wednesday morning to allow him to submit on the application.

The Chief Justice quipped to Shafee that the senior lawyer basically came to the court on Tuesday to seek an adjournment, to which Shafee answered in the affirmative.

Ad hoc prosecutor Datuk V Sithambaram strongly objected to the defence’s request for an adjournment, claiming that the application was a mala fide attempt (in bad faith) to delay the proceedings, and alleged that the defence appeared to be serial offenders of making last-minute requests for adjournments.

“I must say this is not the first time. Even in the Court of Appeal, the day before the day of judgement, there was an application for fresh evidence…this appears to be a case of serial offenders (trying to delay the proceedings),” he said.

Shafee then interjected, noting that he would have to return to Parliament to chair a 2pm session of the symposium, and remarked that he hopes the court exercise its discretion in regard to the bid for an adjournment.

However, Tengku Maimun swiftly struck down the defence’s request for an adjournment, and told Hisyam to proceed with his submissions for the recusal application.

Even having heard the Chief Justice’s ruling, Shafee told the court that he will be present on Wednesday and be ready to submit on the recusal matter, to which Tengku Maimun quickly admonished:” No, no, no. I have given our ruling. That’s entirely up to you whether you want to attend.”

“Nobody has to be here tomorrow if we conclude everything today (Tuesday),” she remarked.

Najib had discharged Shafee and his law firm Messrs Shafee & Co on July 26, and replaced them with Messrs Zaid Ibrahim, Suflan TH Liew & Partners to handle the final appeal.

Hisyam then proceeded with submissions on the recusal application, while Shafee exited the courtroom to attend to matters in Parliament.

Hisyam cited a real danger of bias for the Chief Justice to continue to preside over the proceedings.

In Najib’s affidavit of support, he is seeking to recuse Tengku Maimun from being on the bench, as well as presiding over the final appeal, based on the grounds that her husband Datuk Zamani Ibrahim has been critical of the former premier.

The affidavit specifically cited a Facebook post dated May 11, 2018, attributed to Zamani, which pertained to the fall of the Najib-led government leading up to and after the 14th general election, whereby the author wrote, among others, that he was “happy because Najib had been dethroned”.

“I further state that considering the nature of their spousal relationship, it is likely that the mind of the learned chairperson would have been unconsciously influenced by the sentiments against me held by her Ladyship’s husband," the affidavit read.

“Based on the above, any findings by this honourable court made against me would be subject to scepticism, wherein an informed and fair-minded observer will perceive that the decisions procured are tainted with bias, and the public perception of the independence of the judiciary will be in doubt,” the affidavit read.

Additionally, Najib asserted that the Chief Justice may have been biased in regard to the defence's application to adduce fresh evidence relating to then SRC trial judge Mohd Nazlan — in view of the Walk for Justice held by the Malaysian Bar, where Tengku Maimun via a letter shared her stance that she had no objection to some lawyers asking for an adjournment to attend the event.

He added that when the chips are down, lawyers sometimes would make various application to delay the proceedings.

“With regard to the recusal, the defence could have raised it earlier when the proceedings began last week, as the Facebook posting was made four years ago and the Walk of Justice was four months ago. Why raise it now in a bid to scuttle the appeal?” he asked.

“This is a frivolous and vexatious bid to delay the proceedings further,” he added.